To say that the video game sector is one of the best performing entertainment niches is something of an understatement. The global video game industry generates hundreds of billions per year in revenue and sees many millions of people getting involved with it across the world. It is also a sector which is constantly evolving to attract more players. Whether you like mobile play, online multi-player fun or offline console/PC play, there will be a type of gaming that you love.
Of course, it is the video games you can play which are the driving force behind the industry. This has seen some video games achieve mega success. Minecraft certainly fits the bill and is one of THE most famous video games ever. An open-world romp, it allows players to scamper around an in-game world and place blocks to build things. As well as this, you can hunt for food, fight bad guys (known as ‘mobs’) and do just about anything you like.
As with video games as a whole, Minecraft has been so successful because of its constant evolution, upgrades and unique features. One feature that is really cool is how some famous places and sights have been incorporated into the game to explore virtually. But which are the ten most awesome to check out in your next Minecraft session? 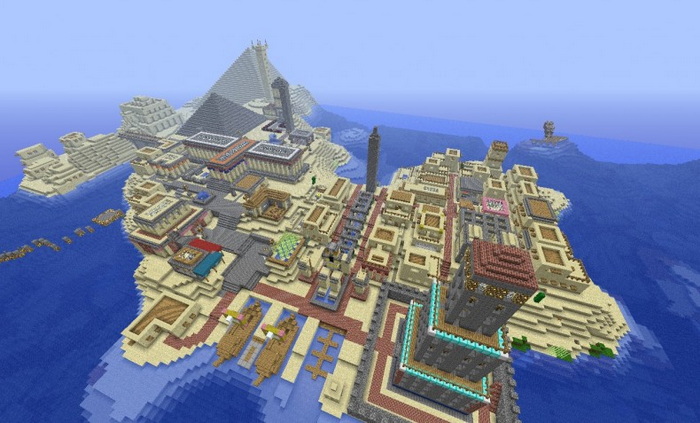 Yes, that’s right – the whole country of Denmark is available on Minecraft to check out. If you cannot get over there in person for whatever reason, this is the next best thing. This is because the Danish Government decided to use official maps to make an authentic Minecraft version of their whole land. The idea was to enable people to explore Denmark when playing the game and be so amazed that they would head over in person.
This means that you can now take a virtual trip to any part of Denmark via the game and spend time exploring it. Over time, Danish citizens have also been asked to add more authentic charm and looks to the world by touching up the version originally created. The only thing that has been banned from this world is TNT – so people cannot blow up parts of the map and leave players with parts of Denmark that are not intact. 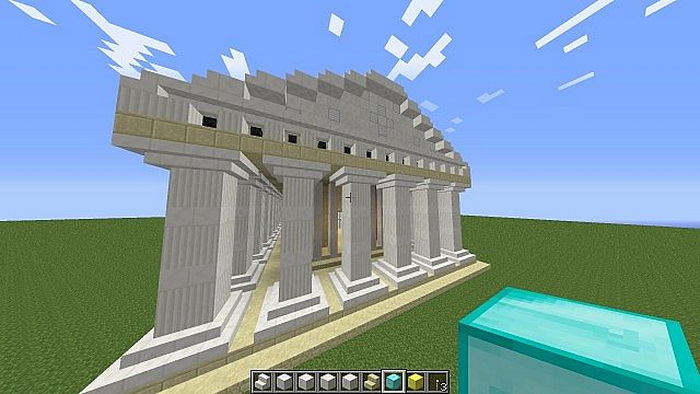 The Ancient Greek society is still widely considered to be the birthplace of civilization in Western terms. As part of this, the Acropolis in Athens was a real highlight. This was a complex of palaces and temples which were simply magnificent. The Parthenon in particular is an icon of this complex and can still be visited today. But what if you cannot afford to head over to Greece to check it out?
This is where the Minecraft version comes into play! It took developers 3 days of solid hard work to get this ready in Minecraft – but the results are worth it. Set in rolling fields of grain, the Minecraft Acropolis really captures the grandeur of this site and makes it easy to see for yourself how amazing it is. 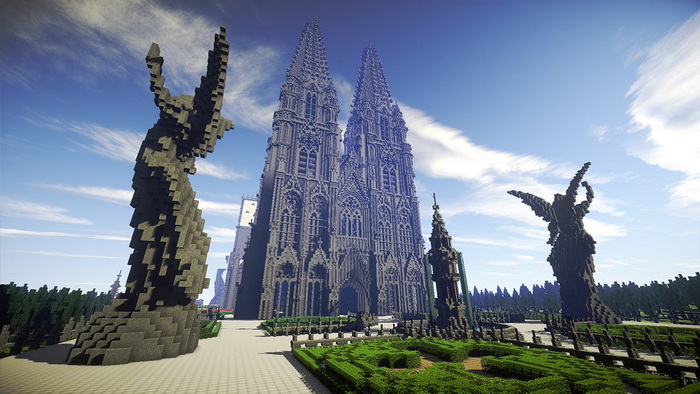 Cathedrals have long been a popular structure to build – both in Minecraft and in real-life. Back in the annals of history, these religious locations were the very pinnacle of building around Europe. Made to enclose huge spaces, they were also designed to make people gaze up to God and explore their relationship with him.
Cologne Cathedral is arguably one of the best structures of this type in Europe and took over 600 years to complete. If you do not fancy a trip to Germany, why not check out the Minecraft version instead? Authentic in every detail, it even has the spires and buttresses for players to clamber on or over. Inside, it is simply huge and has some cool chandeliers for players to gaze up at. If you want to find out what makes this place so special without leaving home, Minecraft can help. 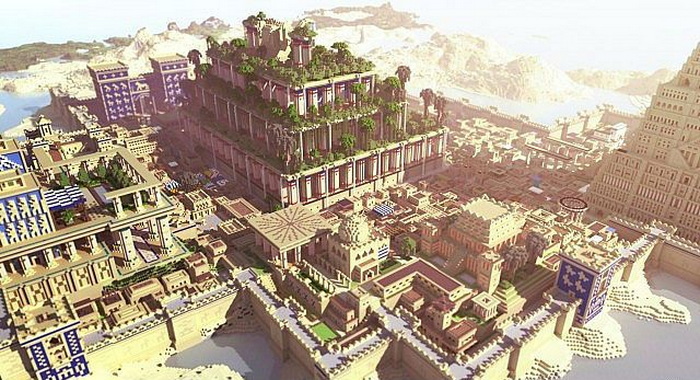 Babylon was not only one of the most amazing places in the ancient world but also home to one of the original ancient wonders too. The Hanging Gardens of Babylon were built around 600 B.C. by Nebuchadnezzar II for his wife and famed for their beauty. No longer standing, this means that the faithfully recreated Minecraft version is the only way to experience it now.
What an experience it is too! Not only do you get to wander and play in the Hanging Gardens but the famous Tower of Babel has also been recreated too. The tower reaches to full build height in the game and makes a great place to practice your elytra skills from. The Ishtar Gate has also been recreated virtually and has a pair of winged bulls to check out. 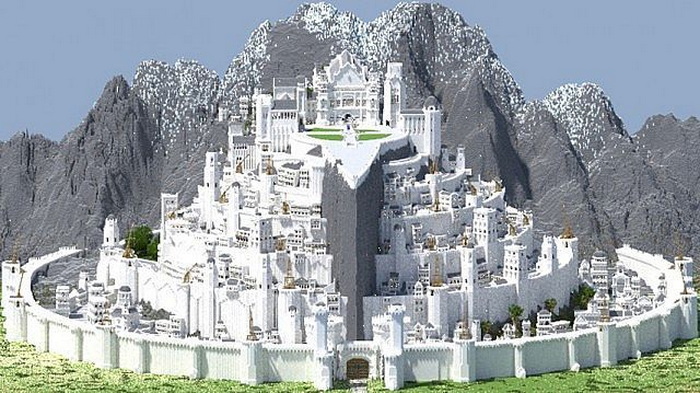 Moving into purely fictional territory now, we have the capital city of Gondor, from JRR Tolkien’s Lord of the Rings books (and films). Minas Tirith is a city built on 7 levels in the books, which hangs onto the side of a steep mountain. Fans of the books and films have done a great job of bringing it to life in Minecraft.
You get the full 7 levels, the White Tower of Ecthelion and plenty of cool banners to enjoy. With so much to see, you will find it takes a full session to explore Minas Tirith in Minecraft and enjoy its many attractions. As a purely fictional place, running around the virtual version on is the only way to see it in all its glory. 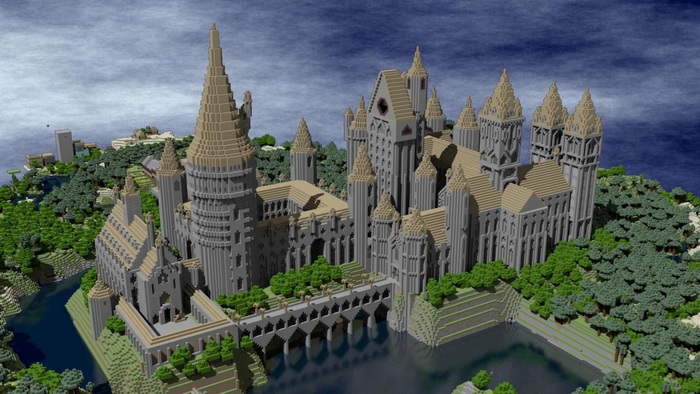 Another popular fictional creation is the Harry Potter series of books and the many famous creations which have come out of that. Next to Harry, Ron and Hermione, Hogwarts is perhaps THE most well-loved feature of these stories. Of course, as with Minas Tirith, it is purely fictional. This means that the Minecraft version is the ideal thing for Potter fans.
Developed by the Floo Network, it contains every small detail and design touch of Hogwarts. From the Whomping Willow to the Shrieking Shack, it is all here to check out. A really cool touch is the floating candles which can be found in the dining hall. To top it off, there is even a Minecraft version of parts of London included in the world, which you have to pass through to get to Hogwarts – just like in the books and films. 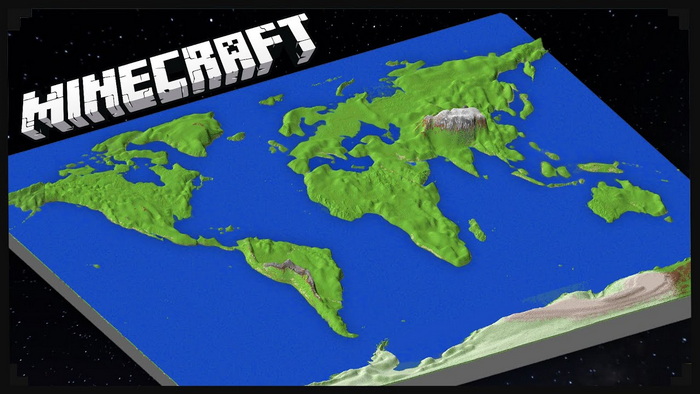 What if you want to actually want to check out the Earth itself from space? In real-life, this is pretty tough to do unless you are mega-wealthy. In Minecraft though, it is no problem! A 1:1500 scale model of the whole planet has been developed for players to enjoy and gaze at, as though in low-level orbit. Measuring 16200 by 32400 blocks, the different areas of the planet are shown via the various biomes Minecraft includes. There is even another version of the whole Earth being mooted for development in the game too. Called ‘Build the World’, it is attempting to make a 1:1 scale model of our planet for players to enjoy. 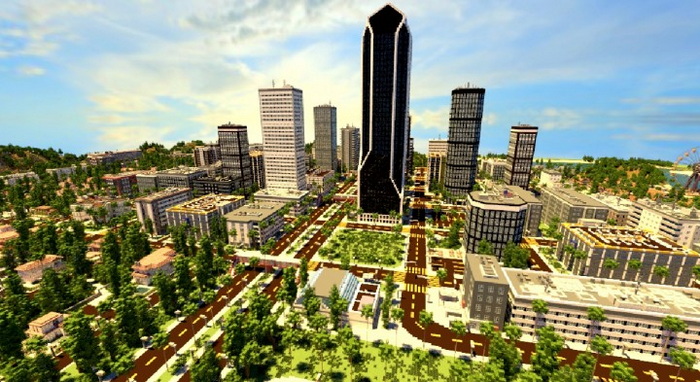 Los Angeles is one of the most famous cities in the world and a jewel in America’s crown. Full of life and culture, it is a very popular holiday spot for international travellers. But what if you could get the whole place to yourself and explore every little bit, without leaving your chair? The Minecraft version of LA is the ideal way to do just that. Although not a literal recreation of the city, it has enough LA style touches and landmarks to do the job. From skyscrapers to glamorous mansions or suburban homes, it really does make for a fun gaming session. There is no doubt that Game of Thrones was one of the biggest TV series of recent times. Running on the WesterosCraft server, the Minecraft version of the TV shows setting is a dream for any fan. It measures 22,000 by 59,000 blocks and contains every location in the books or TV show. This means exploring Kings Landing is easy as is checking out The Wall, the Iron Throne and the Red Keep Palace – to name but a few! Taking 4 months to create, the Minecraft version has over 4,000 homes to wander past and uses all the blocks available in game to their full effect. 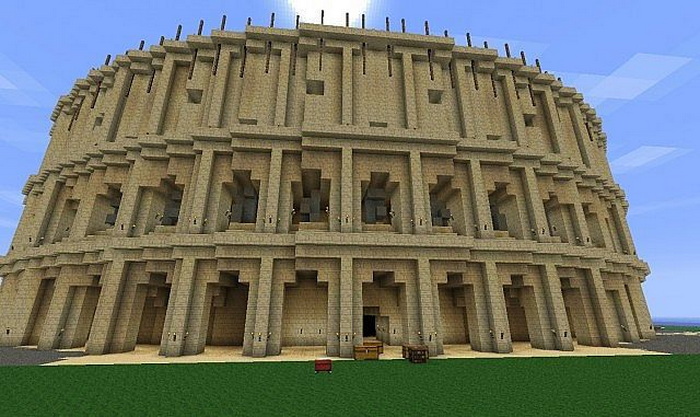 Although still standing today, the Colosseum at Rome is not entirely intact. If you want to see what it was originally like without leaving home, why not try Minecraft’s take on it? As you would expect from a place which reportedly held 65,000 people originally, it is pretty vast in scale. This is great for players though as you lots of room to run about in. Of course, it also comes into its own when you play with others and fancy a PvP battle! The developers have done a great job with recreating this famed arena. From the columns to the sand blocks, it all looks spot on.

Travelling in real life is great – but not always possible. Whether it is lack of money, COVID restrictions or the simple fact you don’t want to travel to the location in question, checking out places in real-life is not always possible. That is where Minecraft works so well! As the above shows, there are some superb versions of the world’s most famous fictional and real sights to see in-game. The only hassle is choosing where to go first.