Ancient Rome was a crazy place in lots of ways. With death and gruesome torture common-place along with hedonism that would shock even the most open-minded person, it wasn’t a place for the faint hearted. This was especially true of the person who was in charge, namely the Emperor. While some were kind rulers who thought only of the people, lots turned into crazed, power-hungry maniacs.
We take a look at ten most insane and sadistic Emperors in Roman history: 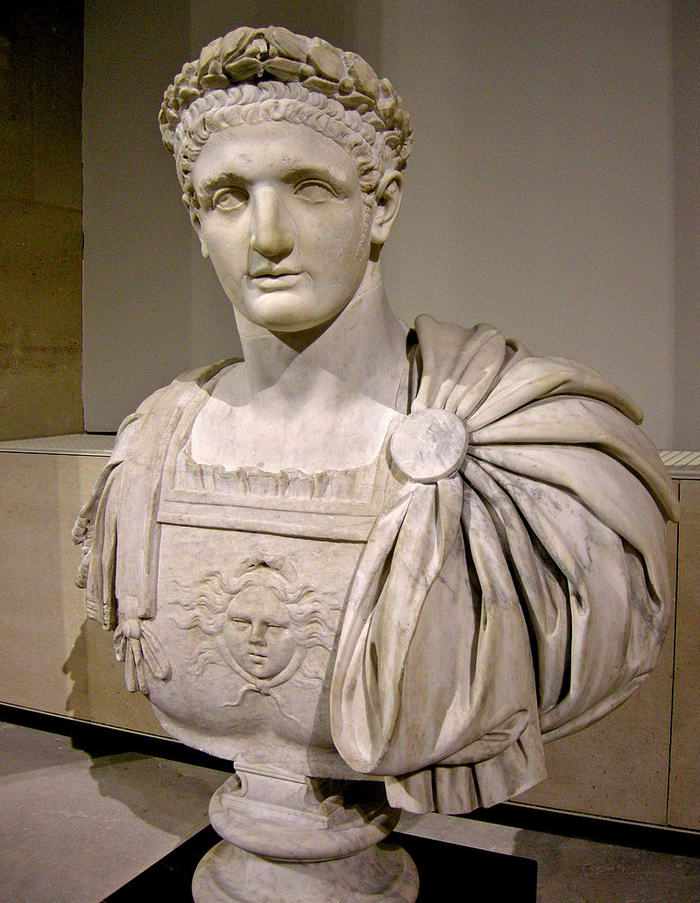 Reigning from 81 to 96 A.D., Domitian was the son of Vespasian and the brother of Titus. He was also completely mental! Operating along the lines of an authoritarian and totalitarian regime, he was a throwback to previous Emperors such as Nero or Caligula. He controlled the propaganda in ancient Rome and would happily murder anyone he thought stood in his way or was against him.
He believed in the power of the Emperor to rule without question and as such severely curtailed the powers of the senate in Roman government. Domitian was also staunchly in favour of worshipping Roman Gods and Goddesses which had fallen out of favour when he came to power. This religious belief led him to persecute the Jews and Christians especially and large-scale efforts against these religions began under his rule.
All this finally led to his death after 15 years in power around 96 A.D. when some of the Senate and his entourage stabbed him to death in his private chambers. 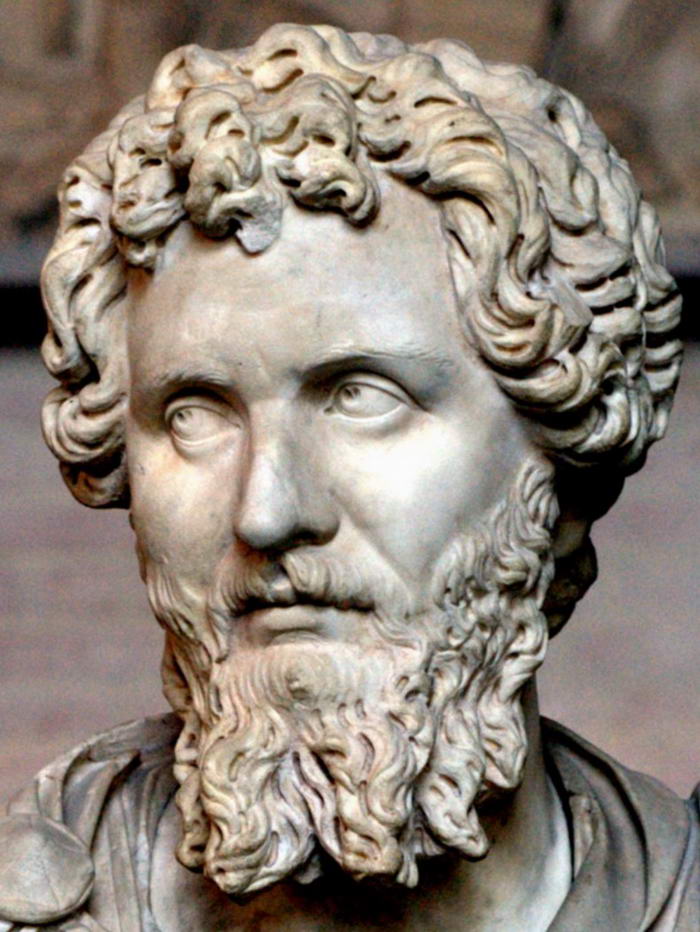 Ruling through a climate of fear and intimidation, Severus was one of the poorest leaders Rome ever had. As with a lot of Roman Emperors he was directly opposed to any religions other than Roman and liked nothing better than persecuting anyone who followed a different creed. To be fair, he didn’t single any one other religion out – he just killed anyone who followed a foreign religion, whichever one it was!
Of course, at the time it was the Jews and Christian who felt the brunt of it. Many died through beheading or crucifixion if they refused to publicly curse Yahweh or Jesus. He also focused on the army mainly and paid little attention the public – this was a tactic though as he knew it was only the army who had the force to depose him.

This guy only ruled for three years from 235 to 238 A.D. and is not that well-known. He was however widely considered as causing the Third-Century Crisis and had a habit of killing anyone he felt had become un-trustworthy. In Roman times, this may be something as simple as not smiling enough when you met him though!
A tall man, reports suggest maybe up to 7 foot, he murdered several of his close friends and advisors during his short rule thus causing panic and instability. Another bad trait he had was a penchant for war – he invaded Dacia and Samatria for no particular reason which made him very unpopular with most people. He was eventually slain by his own Praetorian Guard who stabbed him in the back when he was trying to enter Rome to squash a rebellion. 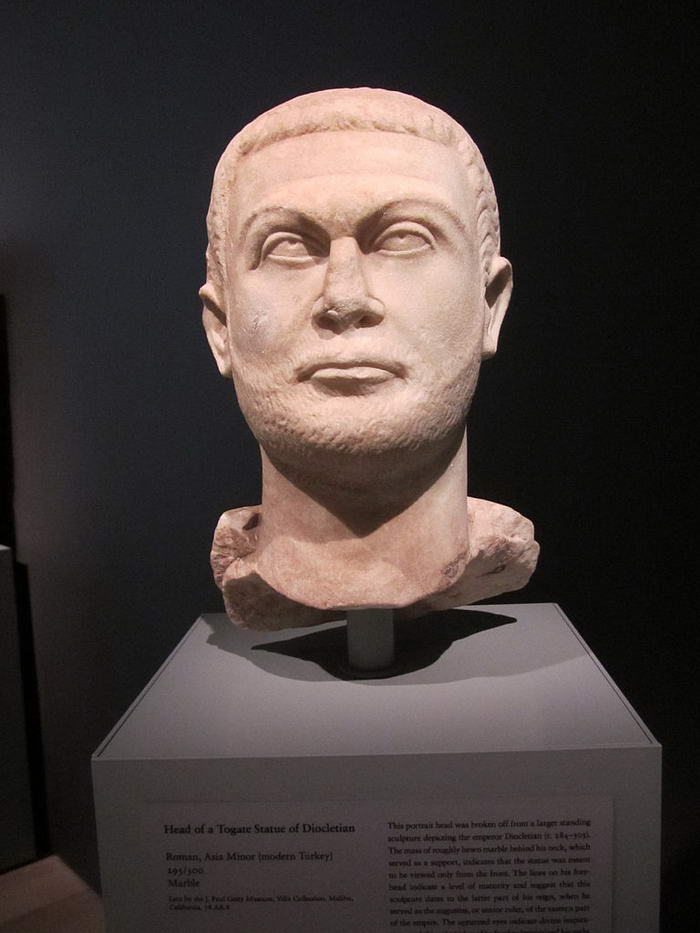 Diocletian – By IslandsEnd (Own work) [CC BY-SA 3.0], via Wikimedia Commons

Diocletian may seem a strange choice for inclusion here as in some ways he ruled well. Under his tenure, the Roman economy was stable and he made improvements to the Roman military might. However, he will most be remembered as the worst persecutor of Christians in history as Emperor which shows how crazy he was.
Beginning in 303 A.D., this persecution started with several pieces of law being passed to remove all rights from Christians until they converted to the Roman religion. When this has little effect, the Christians were rounded up and imprisoned or executed. Of course, many Christians simply went into hiding rather than converting so to combat this he set up the Circus Maximus and Colosseum games where he threw the ones caught to the lions! Estimates are that over 3,000 were martyred by the end of his reign in 324 A.D. 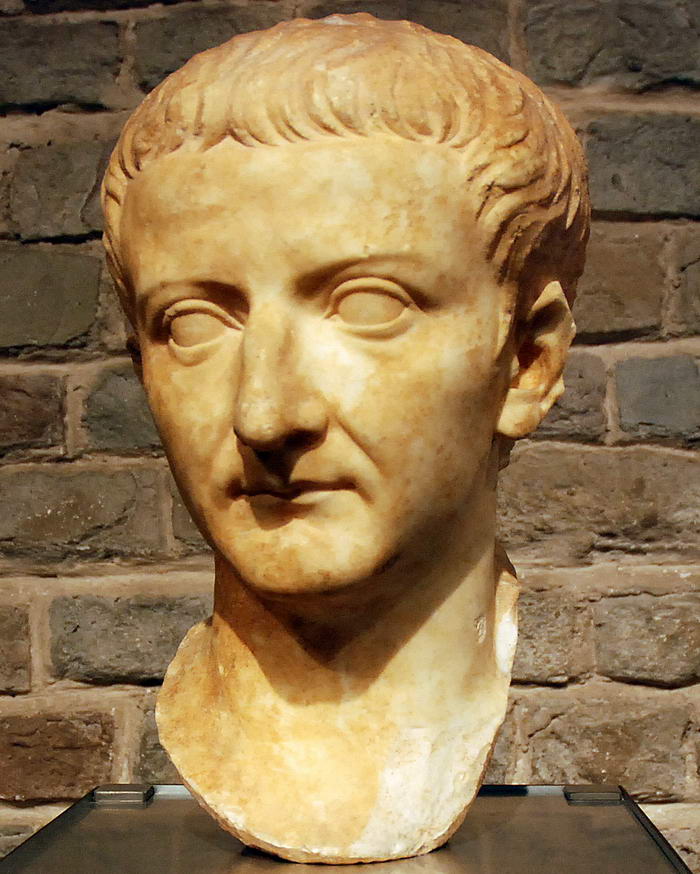 Tiberius – By Paul Hermans (Own work) [GFDL or CC BY-SA 3.0], via Wikimedia Commons

Not only was Tiberius one of the craziest Roman Emperors, he also one of the laziest! In truth, it seemed he never wanted the actual work that went with being an Emperor, just the luxury lifestyle and power to abuse that came as part of the job. As such, he left most of the hard work to the Senate and spent his days partying and indulging in drink and debauchery.
After the Senate and public in Rome got restless at his feckless ways, he fled to the island of Capri in fear of his life and left the Captain of the Guard, Lucianus Sejanus, in charge! Not content with doing no actual work, he also wasted a huge amount of state money on building a villa for himself on Capri to wile his days away in. The parties he held there and general antics were certainly not befitting of an Emperor and were very often simply disgraceful. 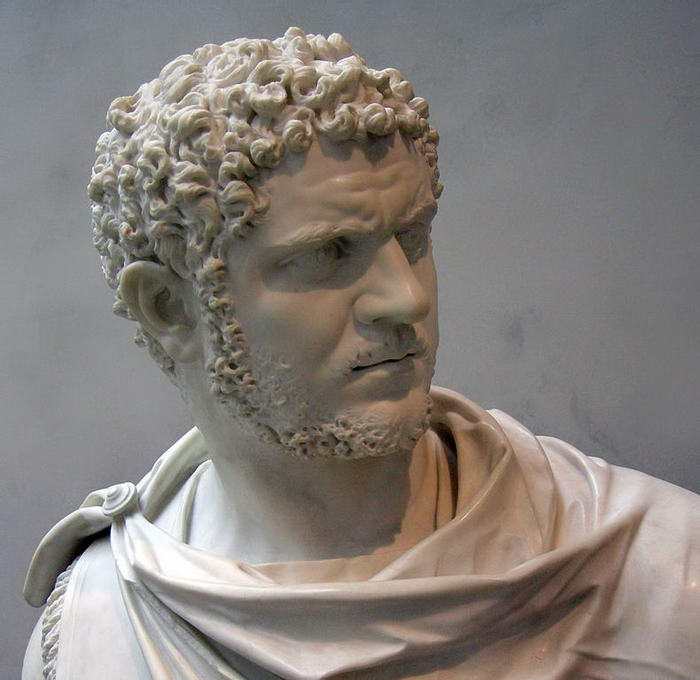 Ruling as Emperor from 198 to 217 A.D., Caracalla was a member of the Severan dynasty. He was a crazy leader because he could not blame mental instability for his shortcomings as some others like Caligula could. To put it simply, Caracalla was just sadistic and cruel! After all, if you can murder your brother and your sister-in-law (which he did!) to gain power, there’s not much you won’t do.
There were numerous tales of his barbarity particularly in the overseas Roman provinces. In Egypt for example, he lured 20,000 members of the public to the main square and had them all killed by his army in revenge for a play that had been staged that mocked him. At the slightest hint of discord anywhere, he would travel with his army to kill and loot.
This all backfired on him eventually though – he had killed a Roman soldiers brother for no real reason and the solider took the ultimate revenge by stabbing him at the side of a road. 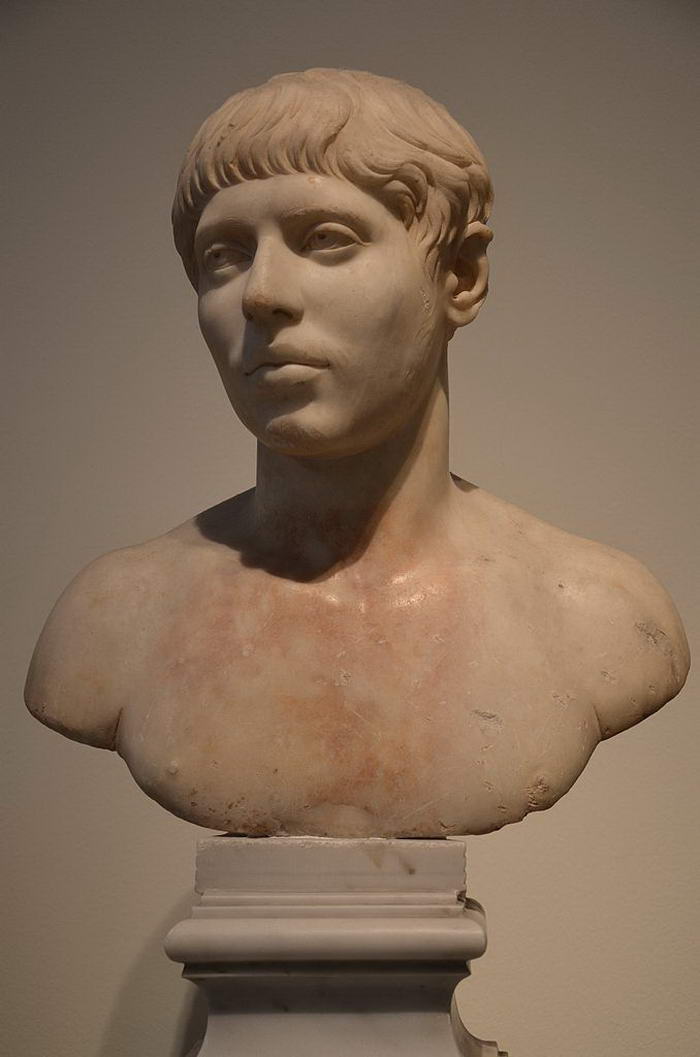 There’s no doubt that Elagabalus was totally mental but I feel a bit sorry for him. He was just 14 years old when he took the throne and so just a boy. Being Emperor was hard enough as a man so what chance did he have really with all that power at such a young age?
Having said that, he really didn’t handle it all well! The main problem seems to be he wanted to be a woman and would regularly dress up in female attire, even in public. Not content with this, he would also go to Roman alehouses and consort with common members of the public. There were even stories of him wandering naked around the Imperial Palace, soliciting any men who passed his way. On top of all this he made the serious error of making the Syrian Sun God El-Gabal the Chief Roman God which outraged the public and Senate.
Eventually, it all came to a head and he was set upon and murdered by his own Praetorian Guard in order to prevent major civil unrest. Just 18 when he died, his crazy rule lasted only four years! 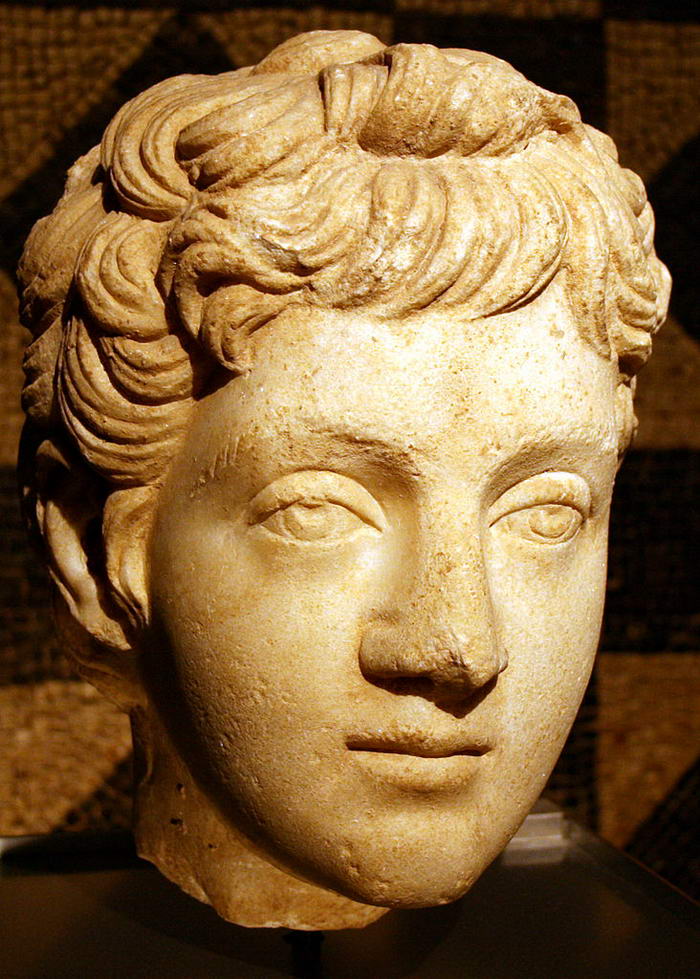 Reigning from 180 to 192 A.D, Commodus was a seriously messed up guy and thought to have been the inspiration for Joaquin Phoenix’s character in the film Gladiator. His father was Marcus Aurelius who was very popular and Commodus naturally succeeded him when he died. Unfortunately, Commodus was nowhere near as efficient or well-liked a leader!
He loved the gladiatorial games in the Colosseum so much so that he insisted on taking part which severely offended the members of Rome’s Senate. This didn’t deter him though – once when he had killed an Ostrich, he waved the severed head at Senators in the crowd and shouted they were next. His love of killing animals was also a sticking point- he would hack anything to pieces but when it was 100 lions in one day or Giraffe’s, the public weren’t keen.
The other major act that sealed his fate was his persecution of the disabled in Rome. He hated them so much he ordered all the hunchbacks and cripples to be forced to fight to the death with cleavers as part of one Gladiatorial games. 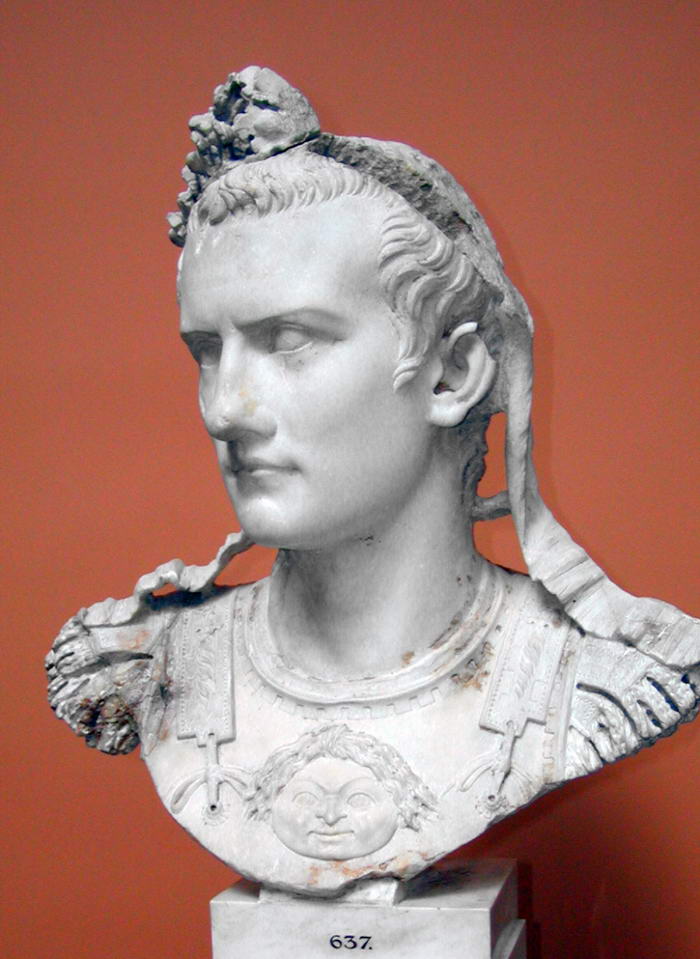 Caligula – By Louis le Grand (Own work) [GFDL or CC-BY-SA-3.0], via Wikimedia Commons

If there is one Roman Emperor everyone has heard of, it’s this fella. Called ‘Mad, Bad and Dangerous to Know’, this perfectly sums Caligula up. The 1970’s film of the same name with Malcolm McDowell in also helped to cement the image of Caligula in the modern public’s mind with its mix of sex and violence.
Even his rise to power was controversial – some say he ordered the Head of the Praetorian Guard to smother the current Emperor Tiberius with a pillow so he could take charge. Initially, he was a good ruler and everyone loved him. But this all change when he became sick in 37 A.D. – when he finally recovered he was a different man!
He showed an appetite for cruelty and debauchery that knew no bounds and would kill on a whim. If anyone disagreed with him on anything at all they were gone and he proclaimed himself divine so he could insist he be worshipped as a living God. Of course, if you refused to do this he would kill you.
Numerous other stories abound, many too horrible or lurid to list here. The more palatable include making his favourite Incitatus an official senator and bringing him to the Senate each day for a laugh and having a man tied down to be beaten with heavy chains for 3 months straight for laughing at him. Caligula was not a man to cross! 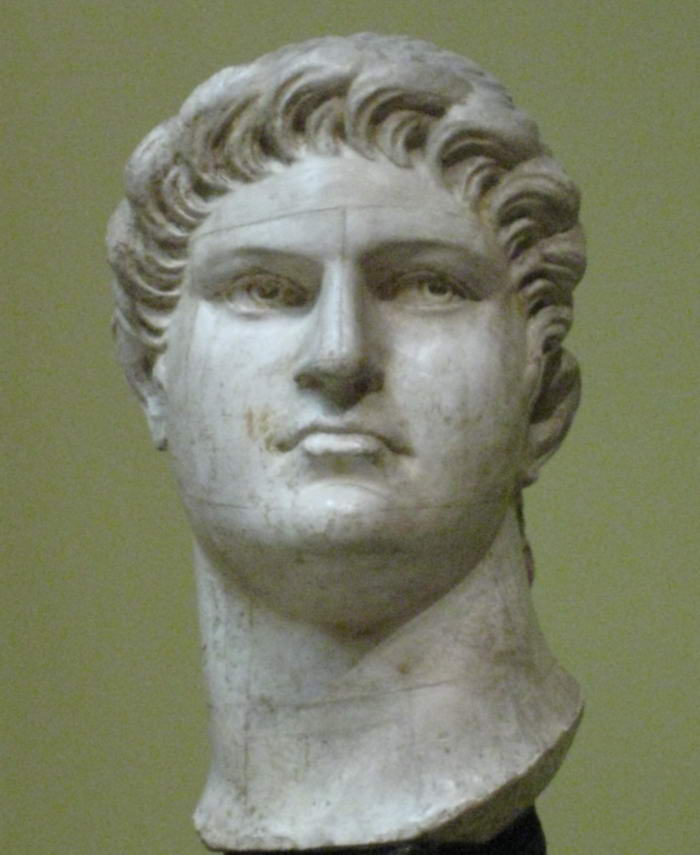 While Caligula was really out there, Nero just pips him to number one spot. After all, if you’re thought to be the person referred to in the Bible as ‘The Great Beast’ (which some claim Nero was) then you deserve top spot.
It’s hard to know where to start with this guy’s insanity and bonkers rule really. As was standard for most bad Emperors he trusted no-one and this paranoia led him to kill and execute many people for no real reason. Famously one of these deaths was his own mother Agrippina who he first tried to drown but then had executed. After being accused of treason in 62 A.D., he simply killed all the accusers to be cleared of any wrong doing!
Perhaps the most famous story involving Nero is that he ‘fiddled while Rome burnt’ during its Great Fire. While this is not true, he did use a large part of the ravaged land to build his new Domus Aurea palace complex on which was unpopular. His favourite past time there seemed to be tying Christians to poles in the garden and setting them on fire to provide light at night time parties.
While the others on our list all have their own unique crimes and eccentricities, I think Nero just beats them all for sheer craziness.

There have been many rulers through Rome’s rich history but the Emperors who make our list are the worst of the worst. With no thought of doing anything other than what pleased them personally or amused them for a few moments, they were sadistic and cruel in the extreme. This is what probably led to their downfall ironically as everyone got fed up of them which heralded the dawn of democracy.