When it comes to the most outrageous, loved, hated, supported and despised figure in world politics, US President Donald Trump has few equals. Perhaps only Russia’s Vladimir Putin has such a strong style of leadership in the current climate that also sees many critics attack him. Trump has many supporters as his election victory shows but also many other people who are simply prejudiced against him, whatever he does.
Rather surprisingly for a US President, his favorite way to communicate with the world seems to be that social media giant, Twitter. He has taken to Twitter many times both when a candidate and since his election to let the American public know his direct feelings on many issues. As this is Trump, sometimes his honesty and straight talking can cause waves!
Here are ten of the most newsworthy tweets from Big D.

This was in fact a series of tweets that showed up on Trump’s Twitter stream while making moves to run for office. They centered around then President Barrack Obama’s place of birth. There had been much speculation at the time that Obama was not born in Hawaii as he claimed but in fact Kenya. This of course would make him not a US citizen and not able to be President. Obama seemed to refute these claims by releasing a birth certificate, but Trump took to Twitter to cast doubt on the authenticity of it. Mind you, when the doctor who signed the birth certificates to verify them died in a plane crash not long after, you could see why Trump may have wondered……. 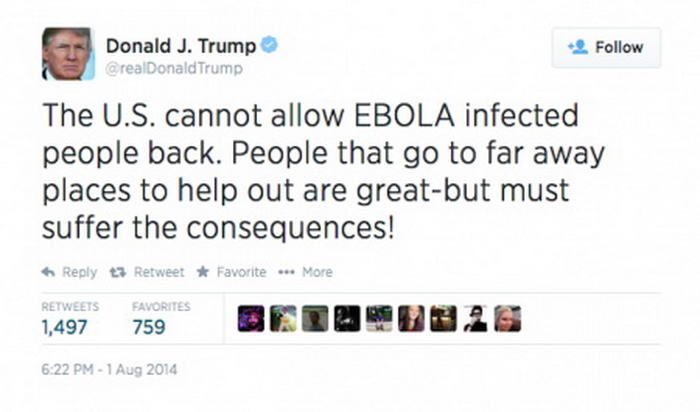 Never one to shy away from expressing his true thoughts, Trump took to Twitter again in 2014. This time it was the Ebola outbreak that he wanted action on, specifically allowing people into America from affected countries. Trump famously called out then President Obama to stop letting anyone from an Ebola infected country back into the US, famously tweeting “What the hell is wrong with you?”

08 – The Celeb Baiting Ones 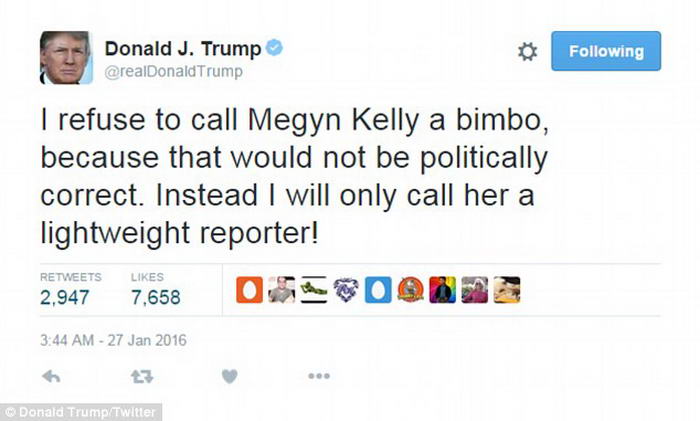 One way in which Trump uses Twitter which some find inappropriate is his habit of getting into feuds with celebs on there. There have been many examples of this, of which his tweet advising Robert Pattinson to dump Kristin Stewart for cheating was just one. His most famous ongoing feud seems to be newswoman Megyn Kelly who he tweets fairly often to tell her how rubbish she is and how she only gets viewers because she constantly moans about him. 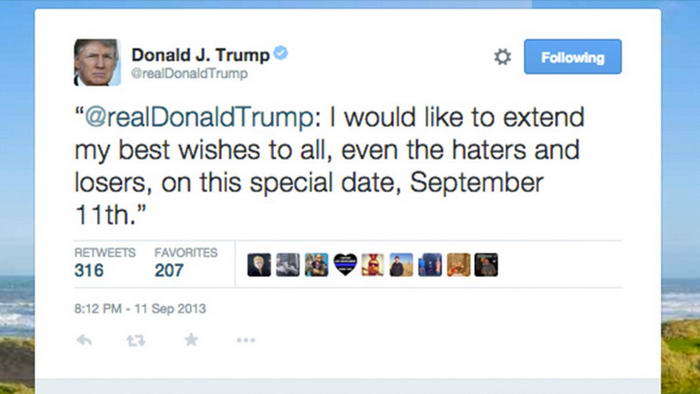 There is no doubt that a huge part of Trump’s popularity is that he is like a normal person you talk to in the street, rather than a career politician. He does not worry about being PC and always says what his honest opinion is. This can lead him in trouble sometimes though when messages that are meant for one thing, say another. Take his tweet on the 2013 anniversary of 9/11 where he tweeted his love for all, even “the losers and haters”. Sort of takes the meaning away when you put that in there too!

06 – The Totally Random Ones

Another unusual way in which he uses Twitter for a President is the random thoughts he puts on there quite often. One great example was his tweet about never seeing thin people drink Diet Coke or boasting about how high his I.Q. is to all the “haters”. It is almost as if he forgets he is President when he logs onto Twitter and comes out with whatever he is thinking at the time. While that is fine for the rest of us, it is probably not great for a man in his position.

05 – The One To The FBI After Florida Shooting 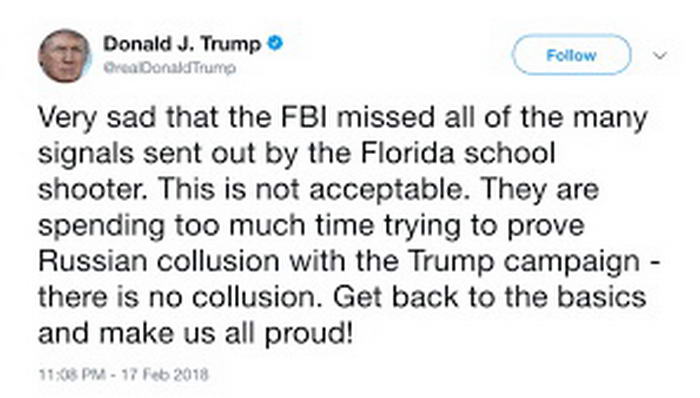 In more recent times, Trump has been beset by allegations about Russian help to get him into office. Although he strongly denies this, the FBI have been investigating the claims on behalf of the public, much to his annoyance. After the Florida school shooting in the country, Trump took to Twitter to berate the FBI publicly for missing a vital tip that may have prevented it. He blamed them for spending too much time on the Russia investigation and not enough looking after the basics.

Another more recent blast from the President’s Twitter account headed the way of Oprah Winfrey. She had hosted a panel discussion show about his time in office which had seen some severe criticism levelled towards Trump. Naturally, he was not impressed and used Twitter to call for Oprah to run for office, so she could be exposed and defeated like all others who stood against him. He also complained about the show being biased and the questions slanted against him. 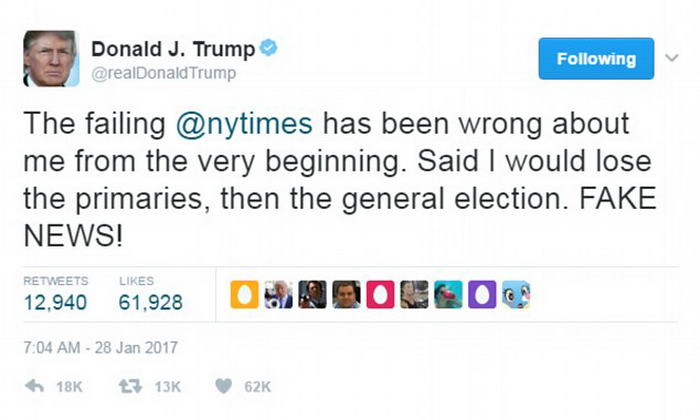 It has to be said that the mainstream media and Trump do not have the best relationship. They basically hate him, and he does not think much more of them. That is why he has always hailed his victory as being for the people who he truly represents, not reporters or the establishment. When The New York Times gained a new publisher, he couldn’t resist taking a swipe at his old enemy. A series of tweets castigated them for their biased reporting with phony sources along with adding that he hoped they went back to reporting the news impartially again.

02 – The One That Owned Hilary 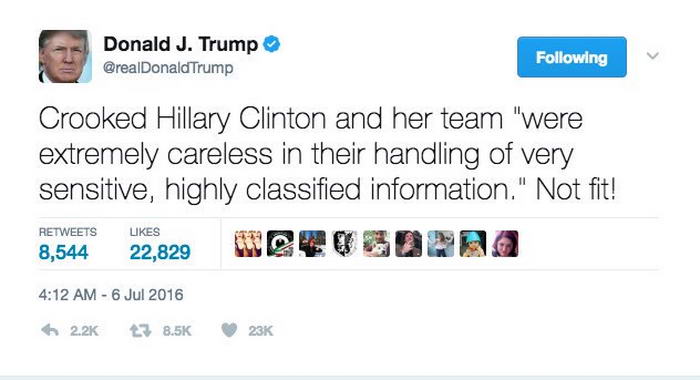 Another person that doesn’t get on with Trump is his arch political nemesis Hilary Clinton. They not only are from opposing parties but really seem to dislike each other intensely. This called for Clinton to tweet Trump, demanding he delete his account. Trump didn’t take this well and replied – asking how long it had took her hundreds of staff to think her tweet up and where all the emails she had deleted herself were! For those with short memories, this is Trump referring to the scandal involving emails that had derailed Clintons presidential bid against him.

This was the calling card of Trumps whole presidential campaign and on that he used to get the public right behind him. He also famously put it on Twitter a number of times, along with the hashtag #MAGA. It really seemed to hit home though and enabled him to convince everyone that he was the man for the job.

Whether you love him or hate him, you can’t ignore him. You can’t also knock the fact that he is honest and says what he thinks. When it comes to politics this is actually a nice change! Although he has as many haters as supporters, he continues to provide a steady hand at the tiller for the USA. It will certainly be interesting to see what happens when he runs for office again!