Horror is still one of the most popular genres for movies and TV shows. There seems to be something fascinating to most humans about gruesome acts and those who lie behind them. Very often though, horror stories from real life can be worse than what directors or writers dream up. These stories are a stark reminder that there is sometimes evil in this world and something truly terrible can dwell inside some people.
If you can hold your nerve to read on, here are the ten most unsettling real-life horror tales in history.

When it comes to tragic and shocking real-life horror stories, this is up there with the most disturbing. Beth Thomas was a normal little girl whose life was turned upside down when her mother died. This left them in the care of their father who began sexually abusing both Beth and her brother. Beth was only a year and a half at the time and her brother was even younger. Eventually, they were both taken into protective custody by the authorities. This was bad enough but the tale does not end there.
The siblings were adopted by a normal couple but Beth had been badly affected by what had occurred. By the time she was 6, she had become violent and aggressive in her behaviour. This saw the adoptive parents having to lock her in her own room at times, to stop Beth stabbing them! Beth had also attacked her brother, killed baby birds and attacked the family dog. At breaking point, the couple who had adopted her took Beth to therapist Connell Watkins for reactive attachment disorder treatment. Magically, it worked and Beth grew up into a totally normal adult. 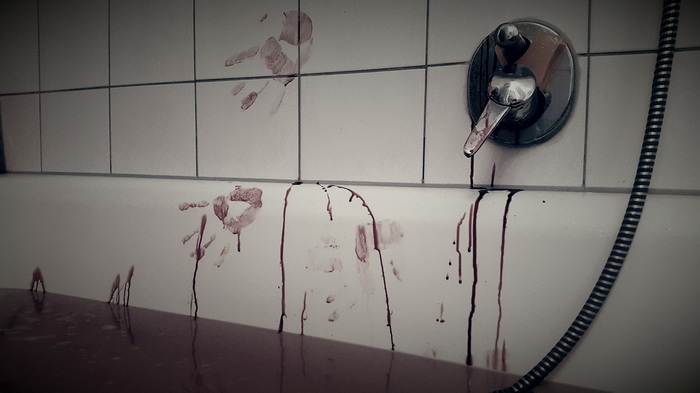 War is a horrible business that seems to bring out the vilest of urges in some people. This was certainly the case in the horrific real-life incident that occurred on the island of Chicijima in World War II. This location is part of Japan’s Bonin island range and so was a target for US airforce attacks. One fateful night in September 1944, the Japanese soldiers on the island managed to shoot down multiple US planes and capture the crew.
This saw all the captured US soldiers tortured, beaten and then killed via stabbing or decapitation. After this, Lt Gen Tachibana ordered the livers and thighs of the dead airmen to be cooked and eaten. After the war, Tachibana was tried in Guam and executed for this terrible incident.

Gay Gibson was an actress from England who was known to have a weak heart and often faint in rehearsals as a result. Despite this, she was successful and appeared in many well received plays in the 1940’s. In 1947, Gibson had finished a stint appearing in the play ‘Golden Boy’ in South Africa and was on-board a ship back to England. With plenty of time at sea, it seems Gibson struck up an intimate friendship with steward James Camb.
One night they were both getting cosy when the steward and stewardess button sounded in their cabin. A nightwatchman arrived but only Camb was there – 21 year old Gibson had vanished. After intense questioning by police, Camb admitted that Gibson’s heart had gone during sex and she had died. Afraid of what people would think, he simply stuffed the body out of the cabins porthole and overboard! Her body was never found and Camb denied murder until he also passed on.

Danielle Harkins seemed a normal 35 year old teacher. She taught at a local family center in Florida and was well loved by her students. This all changed in 2012 though. Many believe that the stress of a recent divorce finally tipped her over the edge. Whatever the reason, Harkins suddenly developed an intense interest in demons, angels and religion. This saw her arrive at a fellow teachers house one day to declare the other teacher was ok and did not have any demons. Things got even stranger though in June 2012 when Harkins invited her students to join her at St Petersburg Pier. Here, she lit a bonfire and began to accuse the students of being possessed by demon and in need of exorcism.
Amazingly, they all followed her orders to dance around the fire and chant to draw the demons out. Harkins then grew very agitated and set one students hand on fire, after covering it in perfume. She also cut one other student and pressed a red-hot key on the wound to close it up. Strangely, none of the students spoke out for a while after this incident and even kept pretty silent when police did question them about what happened. 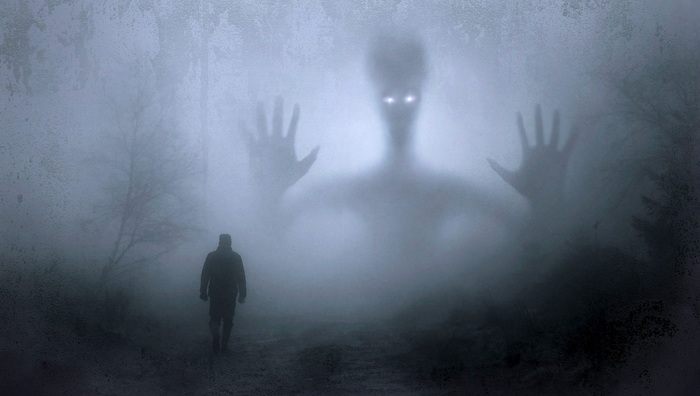 Real-life horror stories can happen anywhere in the world. This tale took place in Sydney, Australia after a holiday break for one local school. Teachers arrived for a first day back in the expectation of it being relaxed but the opposite was true. Staff who entered the schools cubby house were shocked to find a large pool of blood on the floor – about a litre in all. So much blood was present that local police confirmed whoever had lost it would need extensive medical treatment to survive.
However, a thorough search of the school and local area found no body or injured person. Even more mysterious was the fact that there was no trail of blood to or from the cubby house. All signs pointed to a criminal assault or murder, as the injured person would not have been able to move from the cubby house after losing so much blood. While tests showed the victim to be a man, the case is still open.

Halloween is always a time of year when people dress up in gory outfits and lots of fake blood-soaked props are seen around. This meant that residents of the Marine del Rey apartments in LA did not think anything of a realistic prop they saw on this night in 2009. From a distance, the figure slumped over a chair on one of the apartments balconies was a fake and put there to scare people for Halloween.
This proved not to be true though! When police arrived at the apartments a few days after the big night, residents were outraged to find that the figure they believed was a fake prop and had been looking at all week was in fact real. It was the body of Mostafa Zayed who had took his own life by shooting himself with a shotgun.

This is another shocking real-life horror which is also truly sickening. Alesha MacPhail was a normal 6 year old girl who had gone on holiday to see her grandparents on the Isle of Bute. One night, 16 year old pervert Aaron Campbell crept into the grandparents house to steal money or drugs. That was until he saw 6 year old Alesha sleeping.
Campbell chose to kidnap the youngster, take her to a derelict hotel and sexually assault her. Afterwards, he strangled her to death. The attack had left her with over 100 injuries which is truly disgusting and sick. Police soon caught up with Campbell who confessed to his crime and admitted he had been having thoughts about carrying out such an attack for the last year. 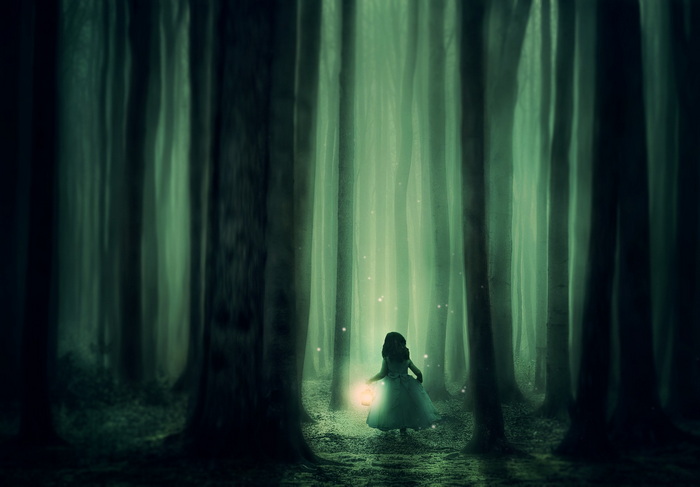 January 2016 saw a strange incident which left many perplexed in Fresno, USA. The local police department released details of a dead man who had been found with stab wounds in a burning building. Identified as local activist John Lang, it was then claimed he had in fact stabbed himself and then set the house on fire to commit suicide.
Where things got weird was when it came out that Lang had told friends a few days earlier that he thought corrupt Fresno cops were going to kill him soon. This also tied up with Lang’s ow social media rants, where he frequently claimed Fresno PD and the County Sheriffs office was crooked. While nothing has been proved, many think that corrupt Fresno cops were behind the killing to shut Lang up.

Sometimes there are some things which happen in real-life which sound too bizarre and horrible for even a movie script. This incident in November 2015 in Houston certainly fits the bill. On the night in question, Racqual Thompson and her boyfriend Cornell Malone left their 4 children home alone to go out for pizza. When they finally got back around midnight, they found the house in disarray and all children hysterical.
On going into their kitchen, they saw the oven range had been knocked over. When they picked it up, their youngest child fell out of the closed oven. They quickly realised one of the other children had put 19-month old J’Zyra inside and turned the oven on, badly burning her. Ultimately, the youngster died from her injuries and the couple got jail time for child endangerment.

In June 1977, George Childs was driving around Buckingham Township when he spotted something moving on a patch of land known locally as Church Hill. Stopping to get a closer look, he soon saw the horrifying site of 20 year old Shaun Ritterson’s dead body. Even worse, the girl’s lower organs had all been removed! Not only that but the inside of her body had washed and packed with towels after. Police also found bruising at the back of her scalp and stab wounds to her chest. The authorities believed at the time that the death was linked to the occult and a possible satanic ritual. While no-one ha ever been arrested for the murder, many point the finger at her uncle Harry Ritterson.

When it comes to true life horror stories, the above are in a class of their own. Shocking, disturbing and truly unpleasant, they show that true life is often more extreme than fiction. The sad thing is that, as time goes on, more horror stories will come to light in real-life to add to our list.