Often when we think about dangerous animals certain features always come to mind. Sharp claws and large fangs attached to an intimidating, snarling beast seem to readily embody the most lethal members of the animal kingdom. Rarely do we imagine a walking teddy bear with sad eyes or a small misshapen fish but the animals on this list are as dangerous and sometimes deadly as they are cute. Let’s dive in and find out why you may want to hold off on the hugs for these ten deceptively innocent looking critters.

Also known as the Crested Rat, this small rodent which closely resembles a smaller, furrier porcupine is found spread across East Africa. Growing up 53 cm in length and sporting a distinctive hairstyle, this little member of the rodentia order has found a unique way to prevent potential predators from making a quick meal of him. Maned Rats have the rare distinction of being one of the only poisonous rats found in the world. Though not completely understood how this behavior evolved, members of the species inherently seek out Acokanthera schimperi otherwise known as Bushman’s Poison and coat their fur in the poisonous shrubs sap. The bark of the shrub is chewed releasing the toxic compound into the saliva which is then applied to the rats quill like fur. Any animal who mistakenly attempts to attack the rodent is given a healthy dose of the highly toxic poison which acts on the heart muscles and can lead to death by cardiac arrest. 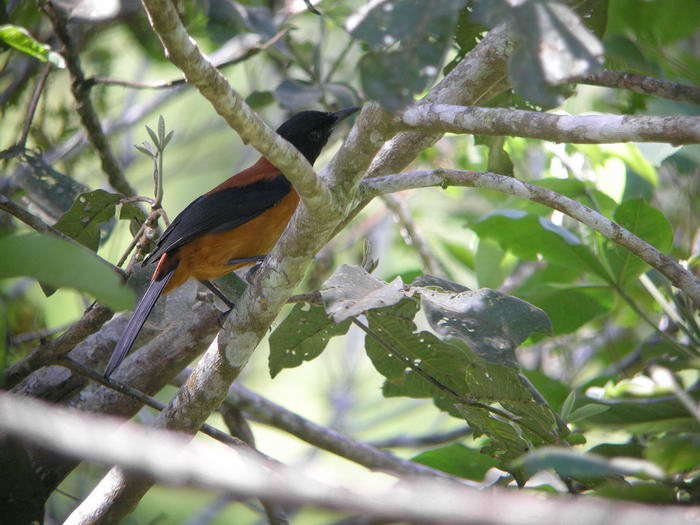 This native of Papua New Guinea shares a distinct characteristic with another member on this list, the poison dart frog. Derived from a diet consisting of Choresine Beetles, the black and orange plumage of the Pitohui is coated with a neurotoxin that can cause paralysis and death in large enough quantities. Anyone unlucky enough to touch one immediately will feel the effects of the toxin and it said that some birds can poison people by just coming in close proximity. This commonly found bird is one the few poisonous members of Aves class. 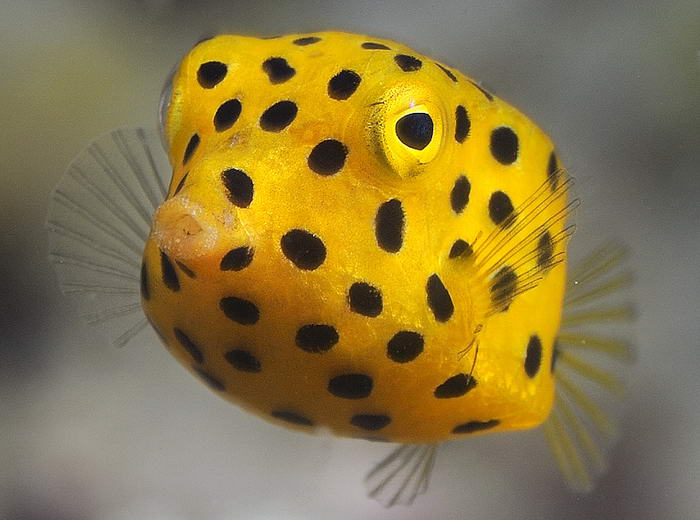 The oddly shaped and aptly named Yellow Boxfish is closely related to the puffer fish though not as deadly. Growing up to 45cm, this common tank fish is sought after for its unique coloration and cute appearance. Amateur collectors soon find out why this fish is best kept calm and away from more aggressive tank mates. When startled the boxfish secretes a cloud of poison that can break down the red blood cells of any would be predators or unfortunate fellow tank dwellers. It is not uncommon for enthusiast who do not exercise care to find a tank full of floating exotic fish when an alarmed boxfish poisons the water. 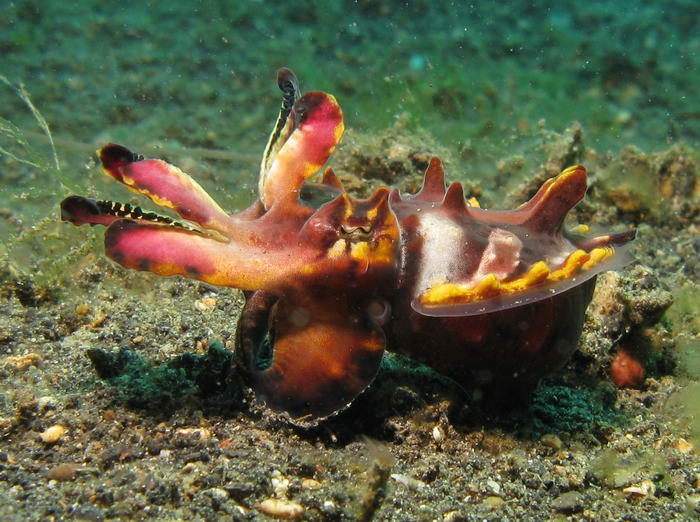 The dimunitive and brightly colored cuttlefish has the unique preference for spending its days “walking” along the ocean floor as opposed to other members of the Sepiida order. Earning the name flamboyant, this animal has the ability to change colors and skin textures at will often displaying deep hues of orange, pink, and white. Though only growing up to 8 cm, M. pfefferi is highly toxic and contains a neurotoxin that attacks vital systems within the body. For its size it is able to kill a fully grown man quite quickly if its poison enters the body. 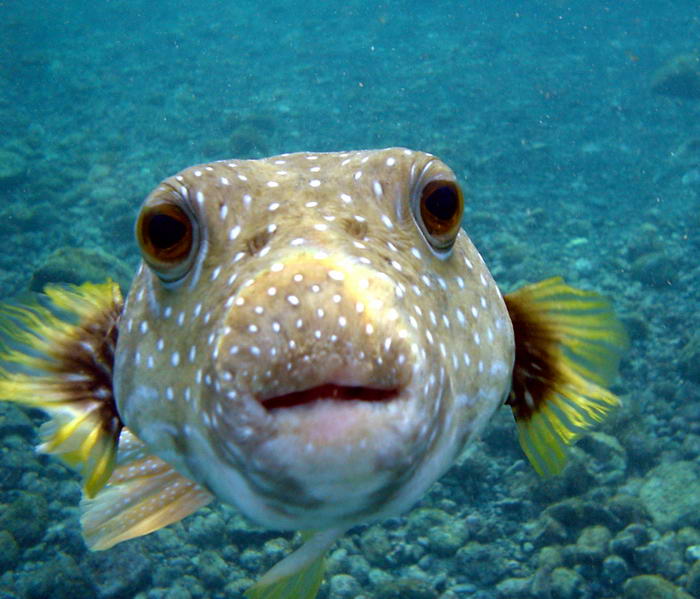 This family of fish is named for their distinct defense mechanism. When threatened they intake water and air to balloon up to three times their normal size. Varying in coloration and characteristics puffer fish share a common toxicity found throughout the family. Portions of the fish contain a highly deadly tetrodotoxin that hampers the body’s ability to send and receive electrical signals from nerves to muscles causing paralysis and respiratory failure. Death often can occur in as little as twenty minutes of exposure. This has not stopped some from seeking out the fish as a deadly delicacy. Famously served in Japan puffer fish meat, or fugu, is prepared in some sushi establishments to anyone willing to risk the chance of death for a taste of this dangerous dinner. 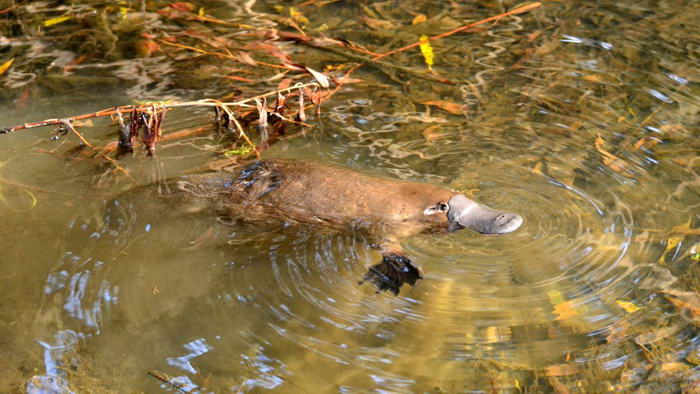 The platypus seems more like a cruel prank than an actual animal and is in a category quite by itself. These odd looking aquatic mammals are not only one of two mammalians to reproduce by lying eggs but are also venomous. The male platypus has barbs located on its rear feet that are used to inflict painful stings. Compared to the feeling of being shot, platypodes, as they are correctly referred to in numbers, offer anyone getting a bit too close a painful reminder to respect their odd looking boundaries. 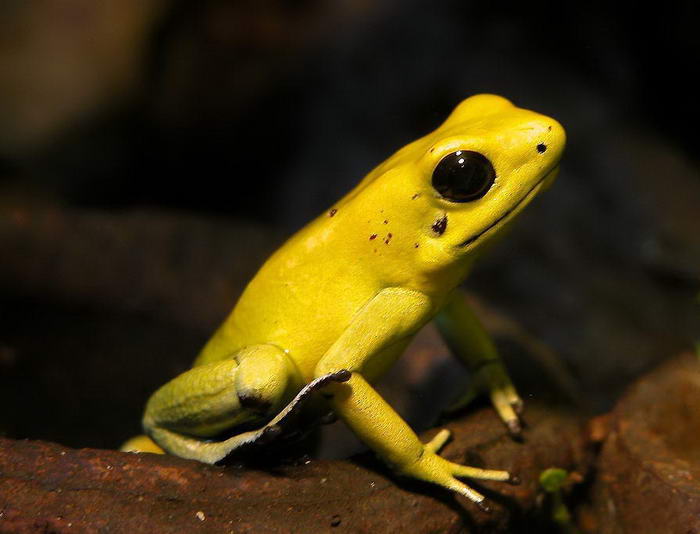 The tiny amphibian native to Colombia is better known as a poison dart frog given its use by natives for producing deadly hunting accessories. The skin of this tiny frog contains a potent batrachotoxin that disables the body’s ability to transmit nerve signals often leading to death by heart failure. The powerful toxin is believed to be derived from the frog’s diet as those kept in captivity slowly lose their toxicity over time. 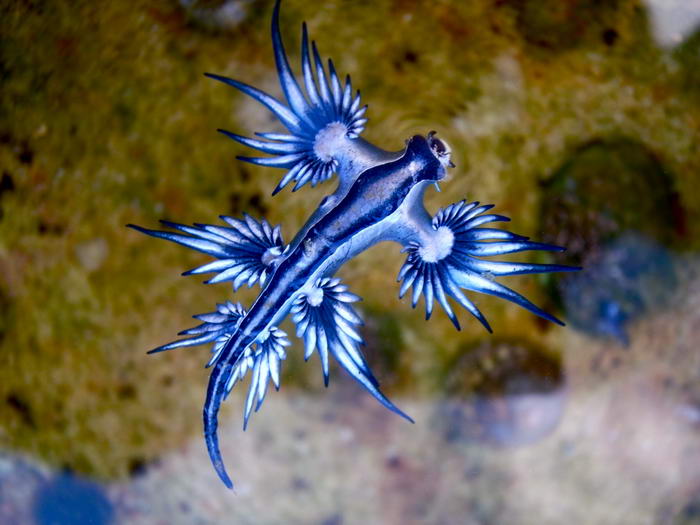 This deceptively beautiful sea slug only grows to be 2.5 cm but is certainly as dangerous as it is alluring. Spending most of its life floating along ocean currents upside down, the blue dragon coasts the sea eating any jellyfish unlucky enough to cross its path. Actively consuming the stinging cells of its prey, the Blue Dragon concentrates the toxins found in the nematocysts and stores it in the long flowing appendages at its sides. Contact with sea slug’s stinging fingers causes immense pain and can lead to permanent damage of the skin cells. 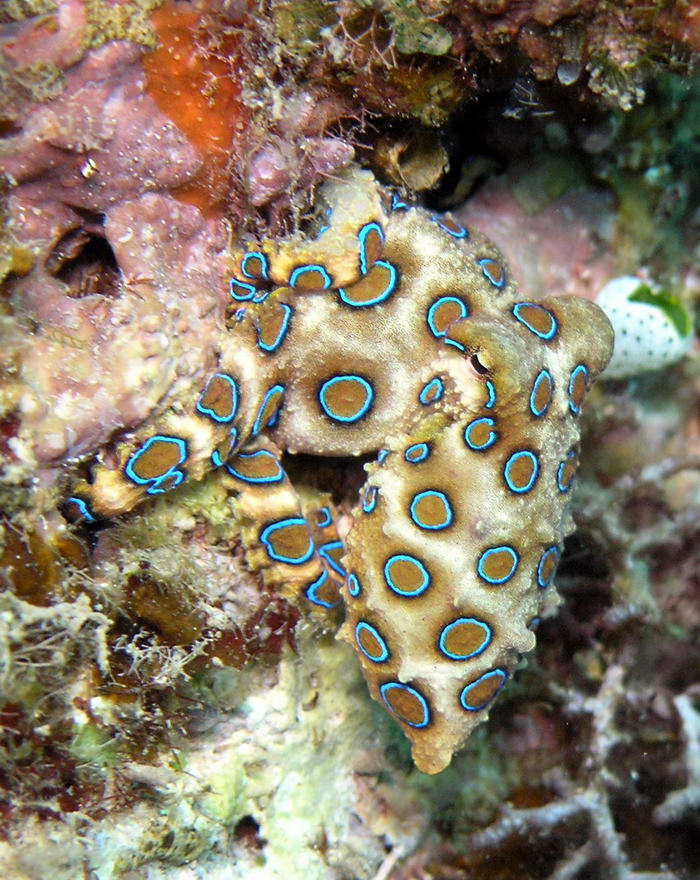 Members of this cephalopod genus are recognized as being one the world’s most deadly creatures despite their small size and passive demeanor. Commonly found in the reefs surrounding Australia, the golf ball sized octopus spends its days hunting small crabs and fish using a deadly neurotoxin that can kill a fully grown human very quickly. The venom is introduced through a small bite that is often not felt by the unlucky victim. Within moments numbness, muscle weakness, nausea, vomiting, and respiratory complications strike the victim often without any warning. Severe envenomation can cause complete respiratory failure and death. 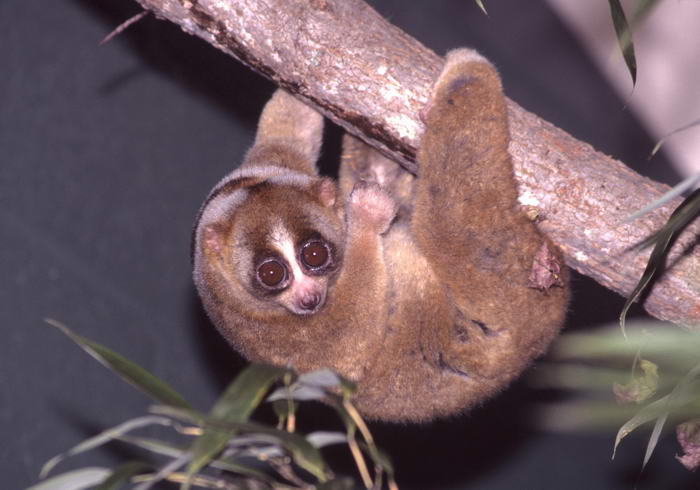 Famous for its inquisitive nature, large eyes, and slow movement the slow loris is essentially a living teddy bear. Videos abound of these creatures being tickled, holding miniature umbrellas, or joyfully eating rice balls. Though it may seem like the best replacement for your stuffed animal collection, these gentle creatures are actually the only venomous primates. Under the elbow of the slow loris is a small gland that produces a toxin that is used to ward off predators. The Slow loris will often mix the substance into their fur and saliva to deliver painful bites that can cause death by anaphylactic shock. This makes the slow loris as dangerous as it is cute.