Enduring and colourful figures in history, pirates have always held a certain glamour and swagger ever since they exploded into the public realm in their heyday. With tales of their bravado, bravery and sometimes cruelty passing into legend it is little wonder they are still remembered. While Johnny Depp’s Jack Sparrow may be a fictional character that brings together much of what we know about real historical pirates, very often the true stories of their debauchery are even more eye-opening!
So, grab your cutlass, put a parrot on your shoulder and get ready to splice the main brace as we look at the ten most infamous real pirates throughout history: 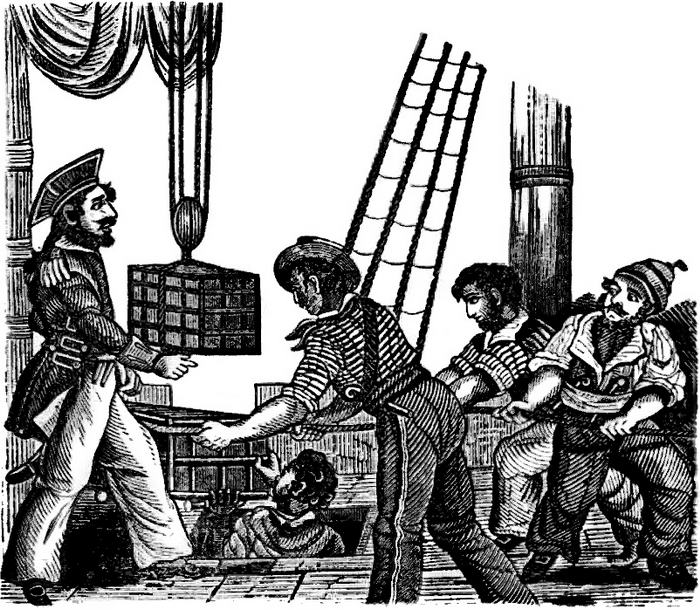 Born as Henry Every in 1653, ‘Long Ben’ as he was known was an English sailor who actually began life in the English Royal Navy. Not the sort of place you would find a pirate usually as the Navy were the people sent out to capture them! After many years fruitful service to the English crown, he joined the Spanish Shipping Expedition in 1693.
Becoming captain of the ship through mutiny while on that expedition, he took his chance to transform into one of the most feared pirates around. Operating around the Indian Ocean, his most famous capture was that of India’s treasure ship that was stuffed full of gold and jewels. Eventually retiring a very rich man, the place and date of his death are unknown. 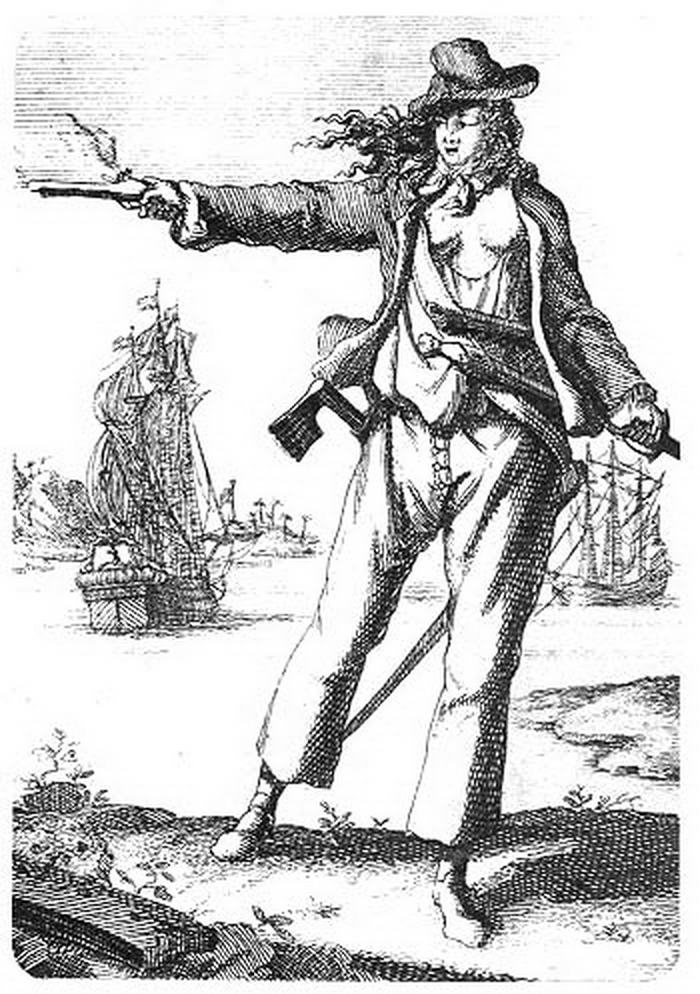 Proving that sailing the seven seas for adventure is not just for men, we have the Irish pirate Anne Bonny. Born in 1700, she travelled to the Americas with her family and married a man she met over there called Jack Bonny. Although he was a sailor, his lack of valour and bravery led her to frequenting the local bars in Nassau. Meeting the famous pirate John Rackham, he accepted her onto his crew.
Dressing as a man so as to be allowed onboard, Anne Bonny showed her mettle and outdid even the roughest shipmate with her drinking and fighting. Eventually captured and sentenced to death, she claimed to be pregnant and so her life was spared. No-one is sure what became of her after that but some believe she escaped and returned home to Ireland. 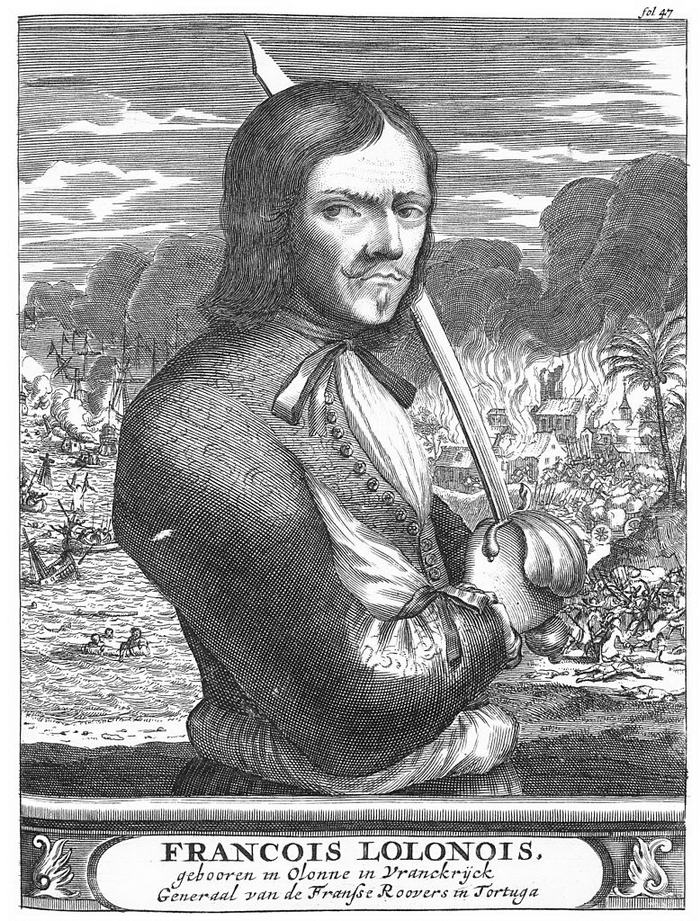 Arguably one of the cruellest and most bloodthirsty pirates on our list, François L’Olonnais was a Frenchman who travelled to the America’s to seek work. Although initially gaining employment as a servant, he soon grew tired of this and fell into piracy. Known for being mean and having no mercy, he would often kill any people he captured after a battle.
L’Olonnais was one of the best land pirates also – he had many successes in raiding towns inland as well as capturing ships at sea. His most famous land grab was at Maracaibo in Venezuela where he sacked the town and took 200,000 Spanish dollars away! Befitting such a vicious man, his own death was a gruesome one. After crashing his ship on a tiny island, he was captured by the local tribe and eaten! 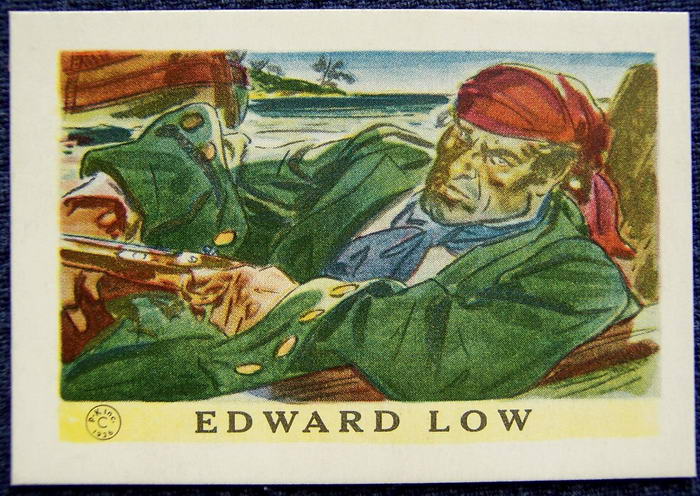 Born in the late 1600’s, Lowe was an English pirate from London. It was no surprise that he followed the path of piracy as his main means of employment in London was pick-pocketing and thieving. After moving to the New World, he began work as a rigger before becoming bored and fancying a taste of the pirate’s lifestyle. Forming a crew and stealing a sloop, he declared his main ambition was “to go in her, make a black flag and declare war against the world”.
His criminal instincts and natural brutality made him an instant success on the high seas. Numerous tales of his sadism abound such as cutting of the lips of captured sailors, cooking them and making the captured sailor eat them. He died around 1723 with two different explanations given – one was that his ship sunk in a storm with the loss of all crew, while another states he was captured by the French who hung him. 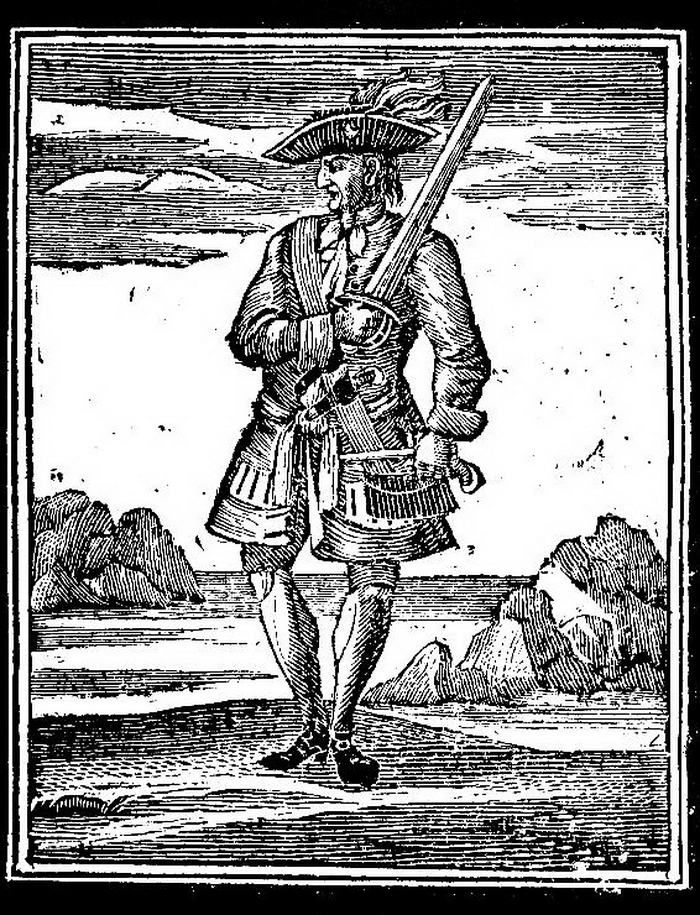 One of the more well-known names on our list, Calico Jack (or John Rackham) hailed from England and was born in 1682. Although a successful pirate his life was relatively short as he died in 1720. His rise to pirate captain was on the back of mutiny after the crew of a ship commanded by Charles Vain rose up. A shrewd man, Calico Jack set off and plundered a few vessels the same day he was made Captain to curry favour with the crew.
Rackham and his crew experienced success on the ocean before meeting their end. After stealing an anchored ship from Nassau harbour, the English Governor of the town sent Royal Navy ships out to capture them. Finally catching up with Rackham and his crew in Jamaica, the Navy arrested him and he was sentenced to death. 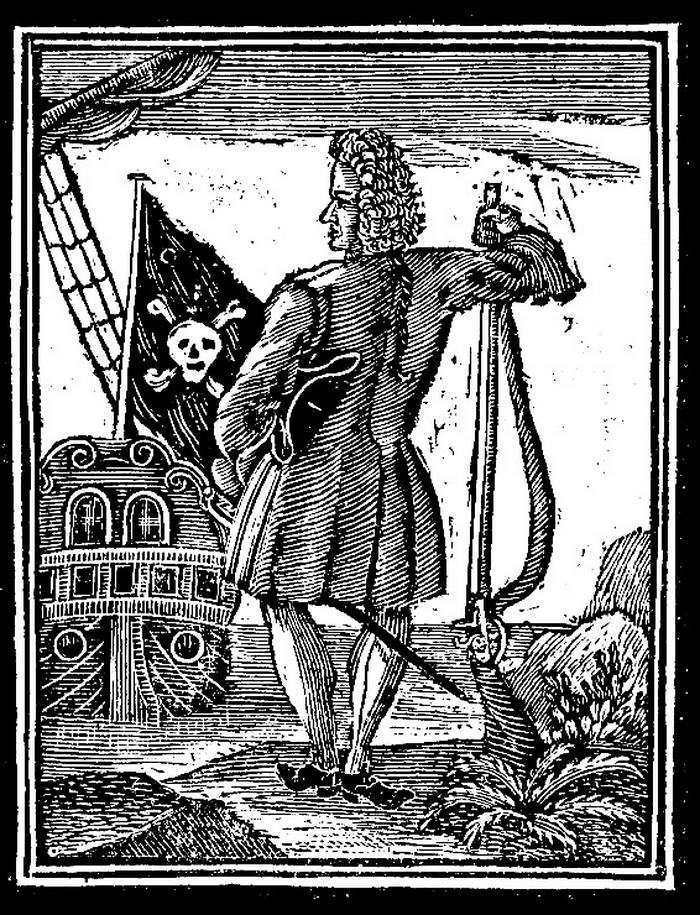 An early 18th century pirate, Stede Bonnet has perhaps the most interesting story on this list. Sometimes referred to as the ‘Gentleman Pirate’, he was a law abiding and wealthy land-owner for most of his life. This changed when, in the summer of 1717 with no prior sailing knowledge, he decided to become a pirate!
Purchasing a sloop that he named ‘Revenge’, Bonnet sailed along the Eastern coast of America causing havoc along the way. Setting sail for Nassau, he encountered a Spanish war ship en route and was seriously wounded in the battle. Eventually making it into Nassau as planned, Bonnet met the most famous pirate ever, Blackbeard. Agreeing to captain Bonnet’s ship for him due to his injuries, they sailed together until December 1717 with great success. The high life didn’t last long for Stede Bonnet though as he was finally arrested and hung in 1718. 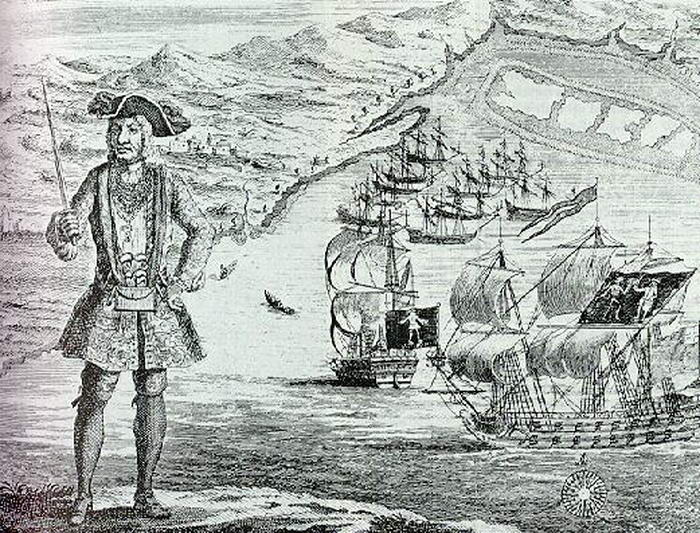 Even the briefest glance at the history of piracy will show that trust and loyalty are not qualities that show up often. In the case of Bartholomew ‘Black Bart’ Roberts though, this is not true. Universally loved by all the crew who sailed under him, he was one of the most popular and charismatic pirates of his time. Interestingly though he didn’t set out to be a pirate – instead, he was forced into it after a ship he was serving on got captured.
Discovering a taste and aptitude for piracy subsequently, he soon rose to captain his own ship. His skill and swagger led him to capture over 400 ships in his career and plunder much booty. Dying in a fierce battle with an English captain, his crew and followers were left reeling by the death of this popular man. 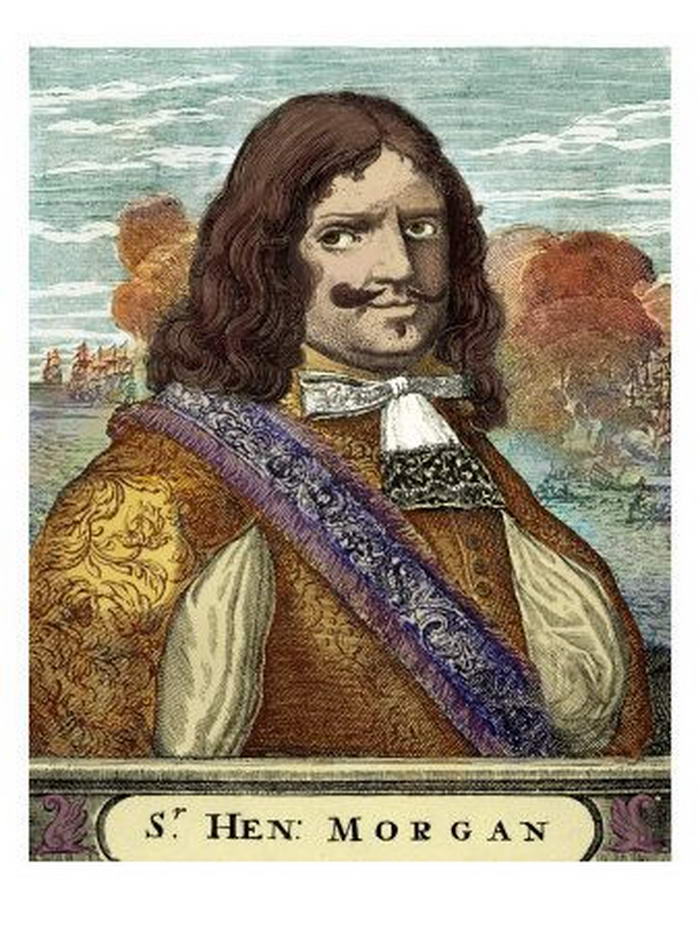 Captain Morgan – By Author of the written work was Alexandre Exquemelin; no illustrator is named in the work, and it does not carry a copyright notice. The image was first published in 1684 (which pre-dates any copyright statutes); it can be seen online at the Library of Congress. [Public domain or Public domain], via Wikimedia Commons

Becoming famous in the late 1600’s for terrorising Spain’s Caribbean colonies, Captain Morgan is a name that most of us know. If not for piracy, for the rum they sell with his name on! Morgan was a little different than the usual pirates however as he was unofficially sanctioned by England to conduct his raids on Spanish ships and towns. Taking upwards of 400 ships in his career, he experienced much success such as when taking Panama City.
After being arrested by his English masters after the Panama raid, things looked bleak for Morgan. However, with the hostilities between England and Spain resuming, he was pardoned and instead lived a long, happy life as Governor of Jamaica. 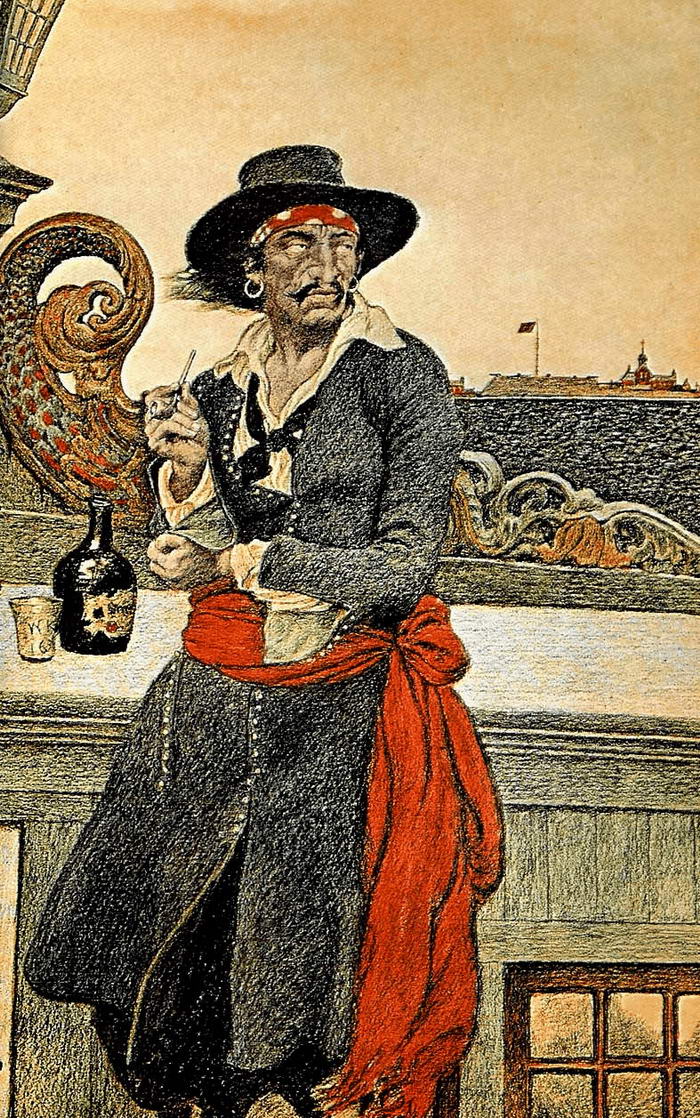 If ever there was a controversial figure in pirate history, this man is it! It could be argued that William ‘Captain’ Kidd was not a pirate at all and his future treatment on this basis was very harsh. Born in Scotland, Kidd actually started out as a privateer tasked to sail the seas and hunt down pirates. Reports suggest it was his crew who mutinied and forced Kidd to become pirate Captain to save his own life. After going down this route, it is thought that many of his exploits were sensationalised after his death.
Kidd’s biggest mistake was attacking and plundering an East Indian Company vessel laden with silk, gold and other precious things. Upon learning he was a wanted man, the treasure was buried on Gardeners Island in case Kidd needed it to bargain with in future. Unfortunately, he never had the chance due to being arrested and imprisoned in Boston. Eventually, Kidd was returned to England where he was hung for his crimes. 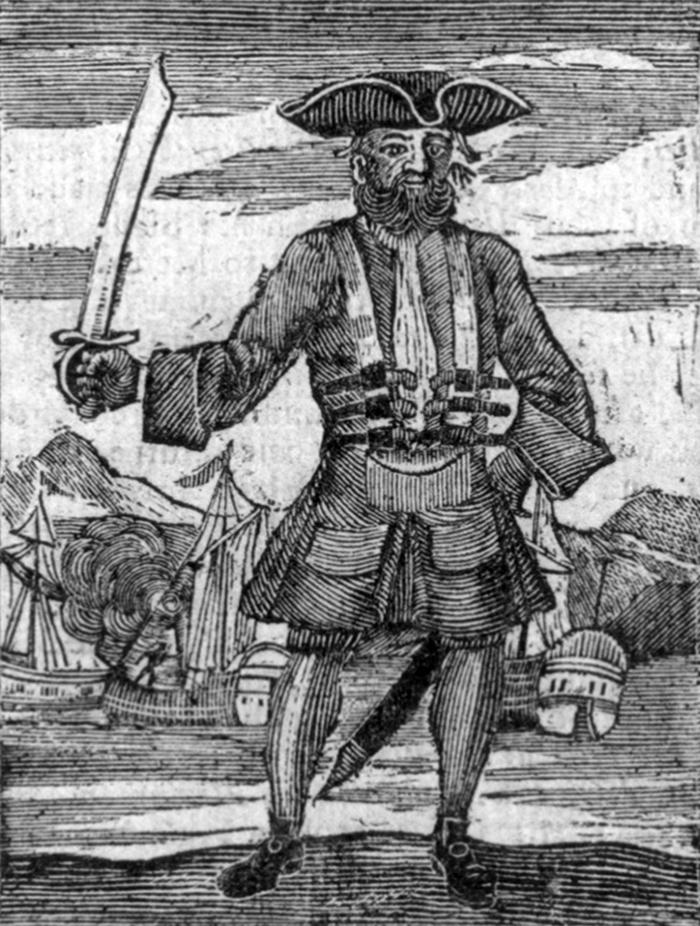 Operating in the golden age of piracy in the early 18th Century, Edward ‘Blackbeard’ Teach is the most famous pirate in history. Born in Bristol, England his charisma, machismo, fearlessness and bravado made him the biggest name ever to set sail. He is also the classic image of a pirate we know today with his beard, colourful clothes and weapons.
Often he would wear large tricorn hats or have feathers protruding from his head. In battle, he would festoon himself with numerous pistols and swords to strike fear into his enemies. Additionally, he would have lighted matches woven into his beard which would send smoke swirling around him. Although his reputation is fearsome, he was not as cruel or bloodthirsty as others on this list – instead he captured ships through his name alone.
Most famously sailing on the Queen Anne’s Revenge, he was killed by a group of men wanting the bounty on his head. Despite being shot and stabbed many times, he put up a fine struggle before dying. Although his physical body passed on, his legend carries forward to this day!

There is no sign that the public’s fascination with pirates will slow down anytime soon. With their tales of adventure and glamourous image, it Is easy to see why this is the case. As we can see from our list though, this is not a modern phenomenon as the lure of easy money and excitement has always existed.