With Wimbledon being in full swing and the clay court tennis season before that providing plenty of great play, tennis is everywhere. There are many superb modern players currently gracing the courts such as Serena Williams and Roger Federer but we mustn’t forget about all those great players that went before them. Although the sport has evolved over the years, the basic principles of skill, speed and passion have not changed.
In honour of this fabulous sport we look back through tennis history at the ten most popular players to have picked up a racquet: 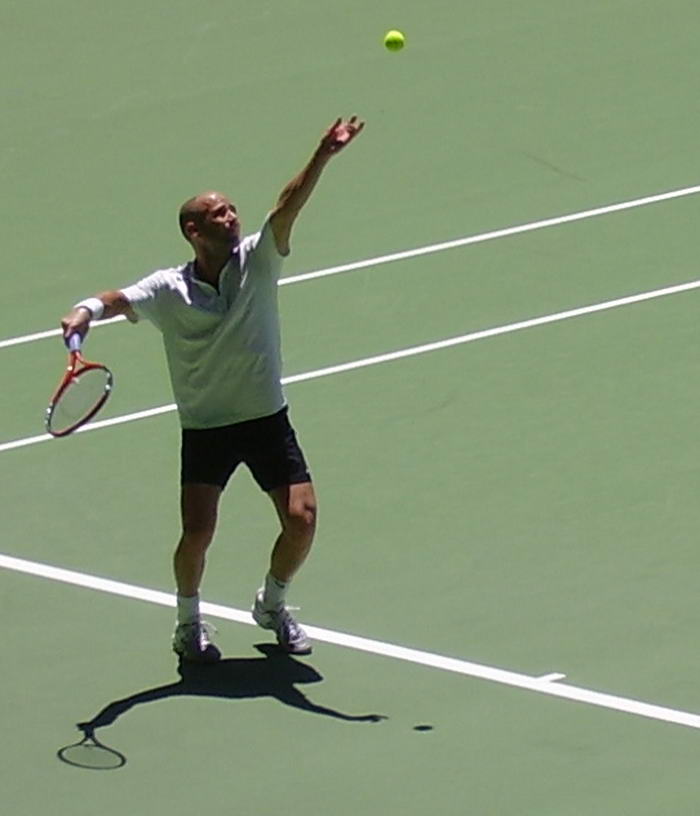 Hailing from Las Vegas, Agassi was almost like the modern-day McEnroe when he burst onto the scene in the 1990’s. With his long-hair and devil may care attitude, he was a player who helped give tennis a cooler edge. It was easy to be fooled by his rock star image but underneath was a fine player.
Notching up 8 Grand Slam singles titles over his career, his ability to return serve so well and array of brilliant groundstrokes was amazing to watch. Finally retiring in 2006, his long and successful career was proof of how good he was. 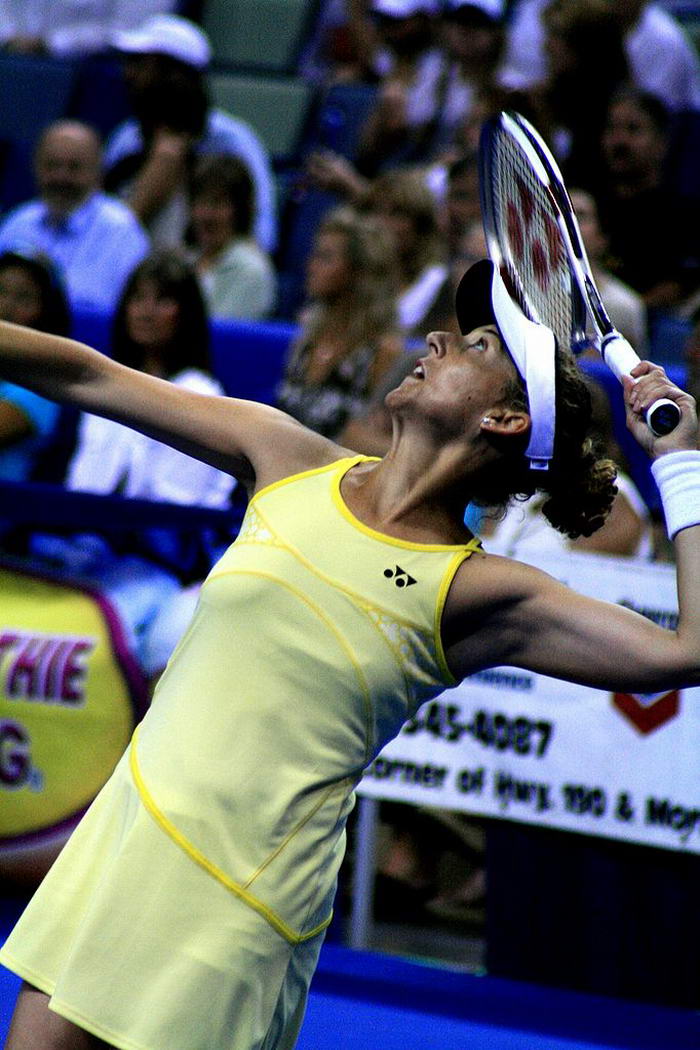 Turning professional in 1989, Serbian born Seles was always destined to be a top player. With 53 career titles including a fantastic 9 Grand Slam singles trophies, her record makes for impressive reading. This only makes the on-court stabbing by a deranged fan which curtailed her career in 1993 more tragic. Although she recovered, she could not get back to the same level as before.
With great power and aggression, in her prime she simply blew away most of her opponents. Famous for her grunting when hitting a shot, her will to win and drive made her a tough player to face. Her epic battles with Steffi Graff were classics that tennis fans will remember for years to come. 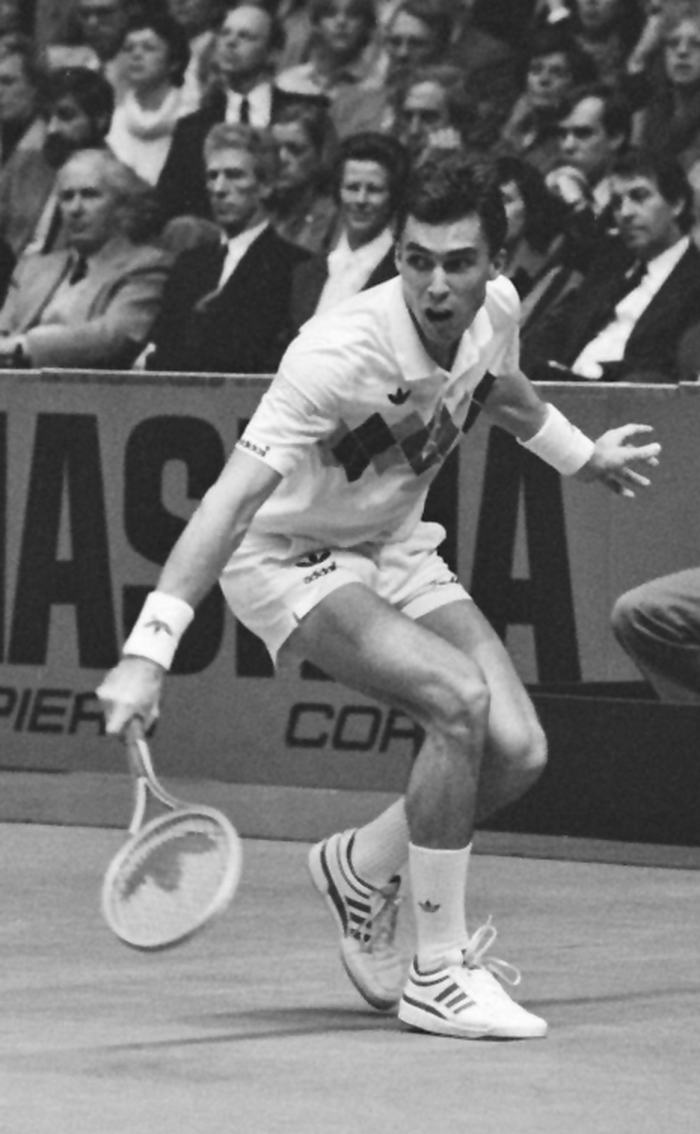 Currently working as very successful coach since retirement, Lendl was a fantastic player in his heyday. Born in Czechoslovakia, he prided himself on being in great physical shape when stepping out onto the tennis court. He also possessed a very effective array of ground shots including a fiendish topspin forehand.
A reserved character off-court, Lendl at one point held the record for the number of weeks at number one ranking with 270. His 8 Grand Slam singles titles are testament to his skill and desire to win. 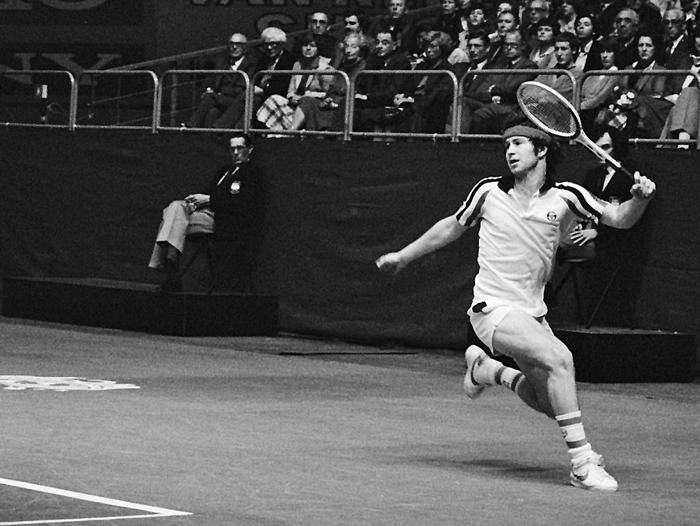 Who can forget McEnroe’s on-set temper tantrum at Wimbledon – “The ball was out!” Unfortunately for McEnroe his bad-boy persona sometimes made people forget that he was actually a fine player also. In terms of creative shot making and touch, he was superb and seemed to love playing on grass or hard, fast courts.
7 Grand Slam singles titles and 71 career titles that included 3 Wimbledon wins, prove the skill and athleticism he had. Involved in one of the greatest matches in tennis history when he lost to Bjorn Borg in the 1980 Wimbledon final, he certainly deserves his place here. 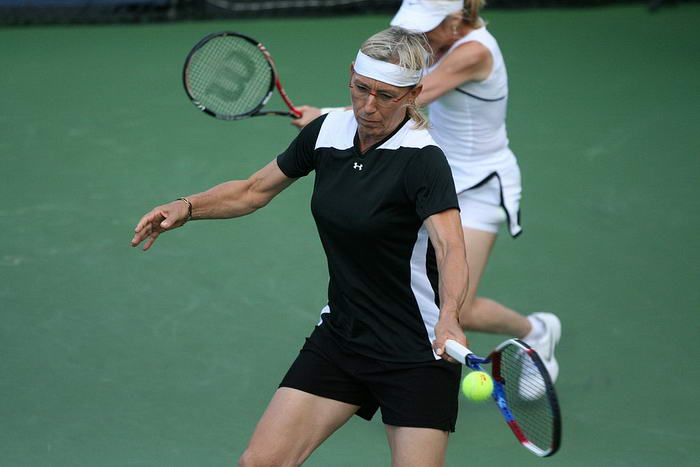 One of the greats of tennis is Martina Navratilova. Known for being very fit, she used this physical conditioning to out-run and out-last her opponents. Combined with a big serve and great use of volley shots at the net, she was supremely talented. Dominating the women’s game from the late 1970’s through much of the 1980’s, she finished with a massive 18 Grand Slam singles titles.
Not content with being a giant in the singles game, she was also a brilliant doubles player too. She ended up with 31 Grand Slam doubles titles and 10 Grand Slam mixed doubles titles! Another notable achievement Navratilova gained was holding the record for women’s singles title wins at the Wimbledon tournament with 9. 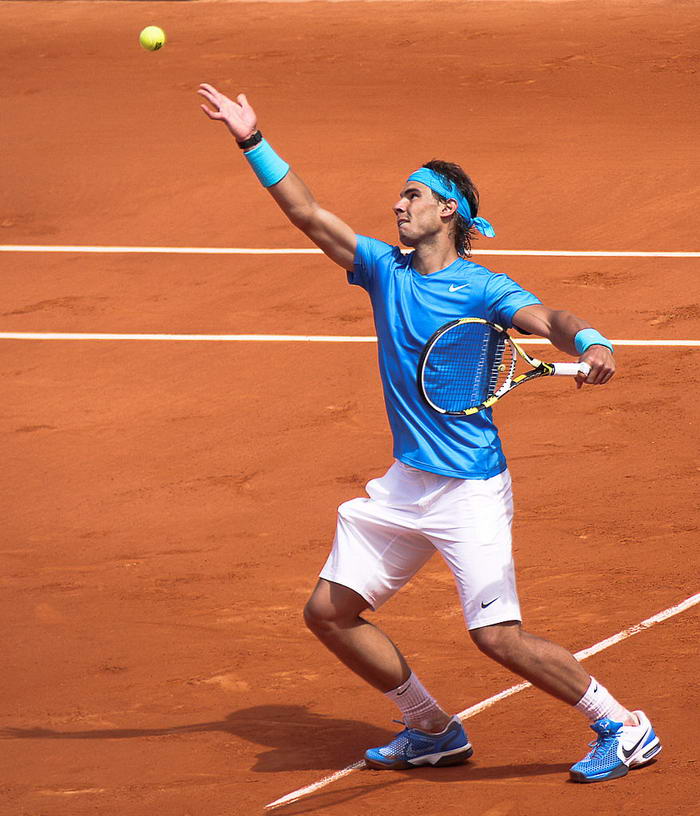 Hailing from Majorca in Spain, this fiery Spaniard is one of the reasons the modern man’s game is so popular. Along with Federer, he is one player that has really dominated in recent years and captured the public’s imagination. Known as ‘The King of Clay’ he has won a record 10 French Open titles as well as winning the other three Grand Slam tournaments. With 15 Grand Slam titles to date, his current form suggests he may add to that before retirement.
Although he has struggled with knee and wrist injuries, his career to date has been superb. With a powerful game based on hitting huge groundstrokes from the baseline, his iron will and determination make him a fearsome opponent. 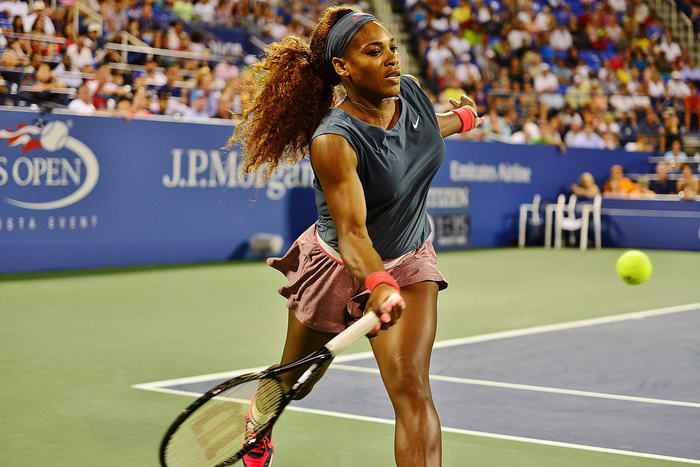 Serena Williams – By Edwin Martinez from The Bronx (US Open 2013 Part 2 668Uploaded by Flickrworker) [CC BY 2.0], via Wikimedia Commons

Since the late 1990’s, the Williams sisters have been giants of the modern women’s game. Although Venus broke through first, it is sister Serena that has gone on to eclipse her. With 72 career titles including 23 Grand Slam singles titles, she will no doubt claim more trophies before she retires.
A true powerhouse of a player, her speed and aggression make her a fierce competitor. Allied with her big serve and great shot placement, she very often just steam rollers opponents that stand in her way. With an 18-year long career, she certainly deserves a place on our list. 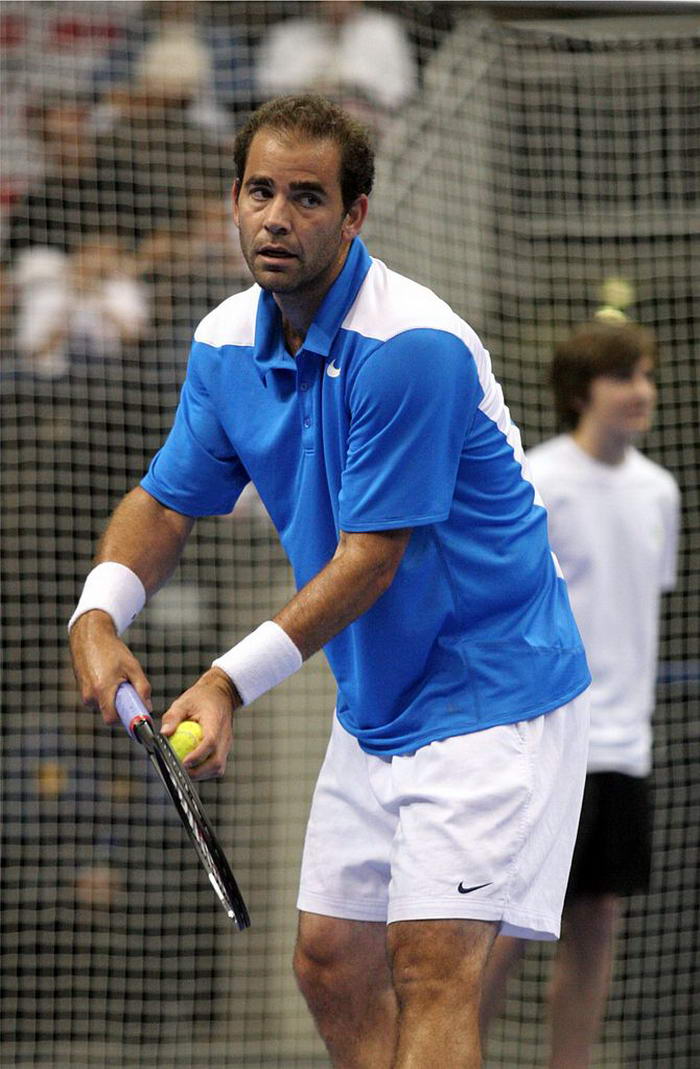 Some people may feel the inclusion of Sampras so high on the list is controversial due to the fact he only won three of the four major Grand Slam titles. Certainly, more comfortable on grass or hard courts, the clay based French Open always eluded him. When you look at his overall record of 14 Grand Slam singles titles and how he dominated the men’s game when he played though, he must still be considered a great of the sport.
Ranked at number one for a huge six years, his battles with Andre Agassi enthralled many fans. Nicknamed ‘Pistol Pete’ for his massive serve, this was the main weapon he used to gain victory along with his volley shots. Retiring in 2002 after winning his final US Open title, Sampras was a fabulous player. 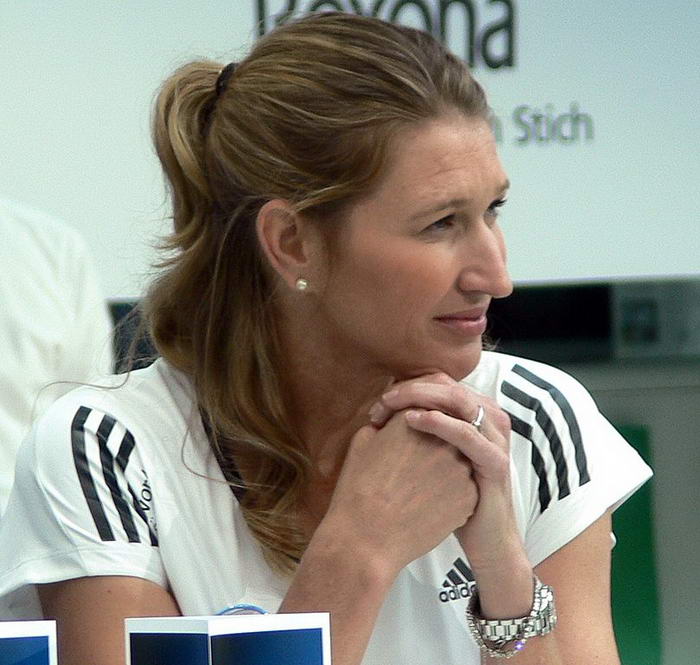 Arguably the greatest women’s tennis player ever to have graced the court, Steffi Graff had it all. Able to play equally well on all surfaces, she had superb footwork which gave her the ability to move quickly around the court. Graff also had a powerful forehand shot which she won many points with in her career. Indeed, the way she used that forehand from behind the baseline was a forerunner of how the game is played by many now.
Notching up an amazing 94 career titles including 8 Grand Slam singles titles, her greatest achievement was the calendar year Golden Grand Slam. This involved Graff winning all four major Grand Slam titles in the same calendar year as well as the Olympic Gold medal. A true legend, this shows just how good she was. 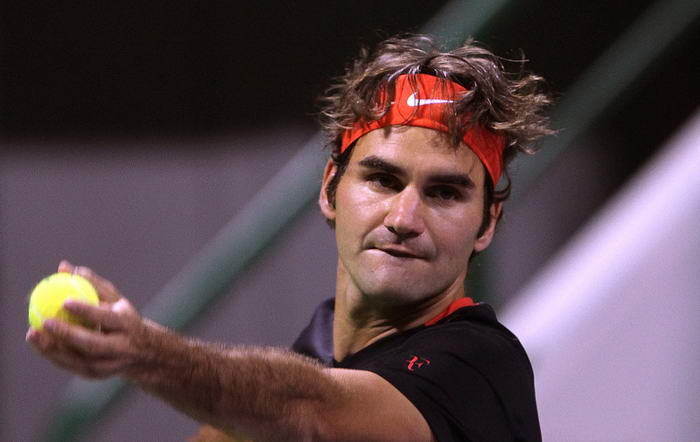 Roger Federer – By Doha Stadium Plus Qatar from Doha, Qatar (Roger FedererUploaded by flickrworker) [CC BY 2.0], via Wikimedia Commons

Along with Rafa Nadal, Federer is one of the living legends of tennis. Federer is probably the better of the two though and just sneaks it as greatest of all time currently. With 91 career titles including 18 Grand Slam titles, his resurgence in 2017 shows just what a great player he is.
Known for his superb shot control and accuracy, Federer has an elegant game that is almost a throwback to tennis in days gone by. One of the most popular players to have played also, he is the home town favourite wherever he goes! His 302 weeks ranked at number one is an open-era record and his performance in the 2017 Australian Open shows just what amazing talent he has.

This list was a really tough one to put together as there’s so many big names like Jimmy Connors and Chris Evert that didn’t make it in. That just shows how good the people who did get in are or were and also what a long line of outstanding talent the sport has seen over the years. With young guns like Dominic Thiem and Johanna Konta continuing this progression, tennis looks all set to thrill for years to come.