Our planet perhaps was incorrectly named as the mass majority of its surface is actually water. Though most of Earth is covered by oceans a staggering 95% of our seas have gone unexplored. Every new exploration yields undiscovered land masses, unseen species, and buried secrets from our past. Often every piece helps us find a previously unknown detail of the place we call home though there are times when what we find leaves more questions than answers. The following ten discoveries have led to countless speculations and at times farfetched scenarios spurring us forward to continue searching for the truth hidden below the surface our seas. 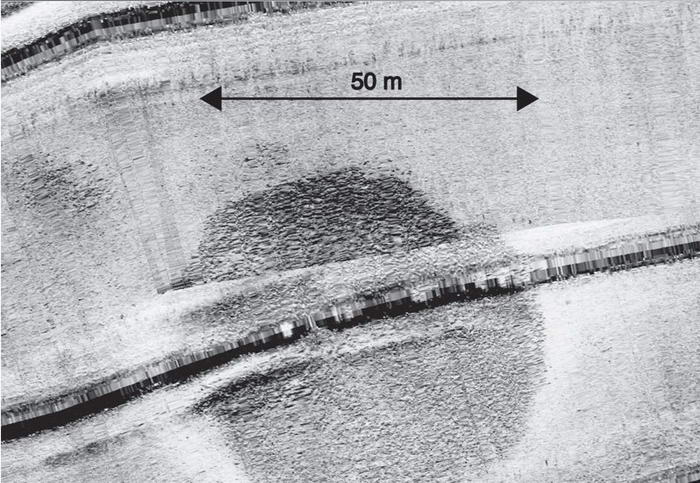 The Sea of Galilee Mound – Image via edition.cnn.com

Measuring ten meters in height and 70 meters in diameter this underwater mound of basalt rocks positioned into the shape of a cone is believed to be at least 4,000 years old. Discovered accidently by scientist surveying the lake’s floor with sonar, the unusual formation is double the size of Stonehenge and its purpose just as mysterious. Some parties have stated the structures could be an ancient burial mound that has been slowly sinking due to rising water levels. At the moment not enough evidence has been found to definitively say what the mound’s purpose is or who placed it there. 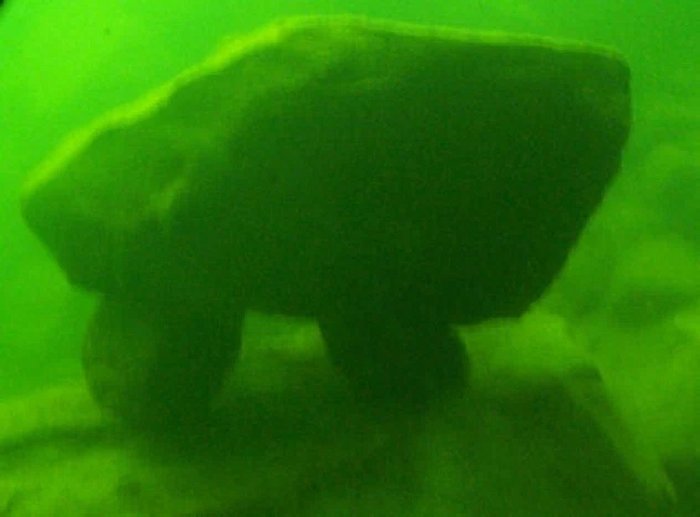 First spotted in 2005 this unusual stone structure was found 12 meters below the surface of Ontario’s Lake MacDonald in Canada. It was originally thought to be a naturally occurring phenomena deposited by long since melted glaciers. Further examination proved the large 450 kg stone perched atop seven baseball like stones was man made. The rocks are believed to date back to era of Canada’s history when the lake resembled a dry tundra and are over 10,000 years old. 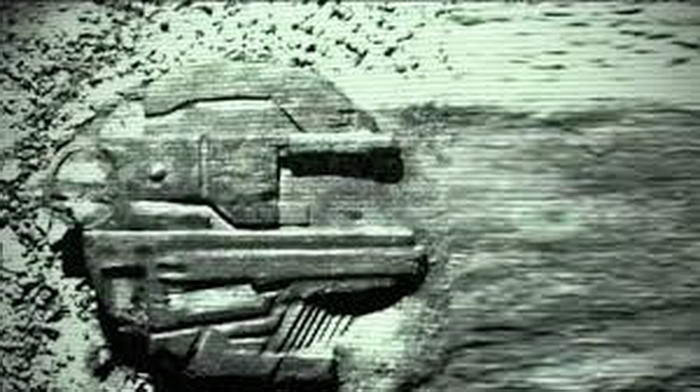 The internet was abuzz in 2011 with speculation that a UFO had been found resting on the bottom Baltic Sea with some even claiming it to be none other than the Millennium Falcon popularized in the Star Wars series. Adding to the rumors was the claim that all electrical equipment used to explore the area was malfunctioning when brought within 200 meters of the object. While the possibility of a downed UFO lying below the sea’s surface seems implausible, the structure does bear markings suggesting it may have been constructed by human hands. 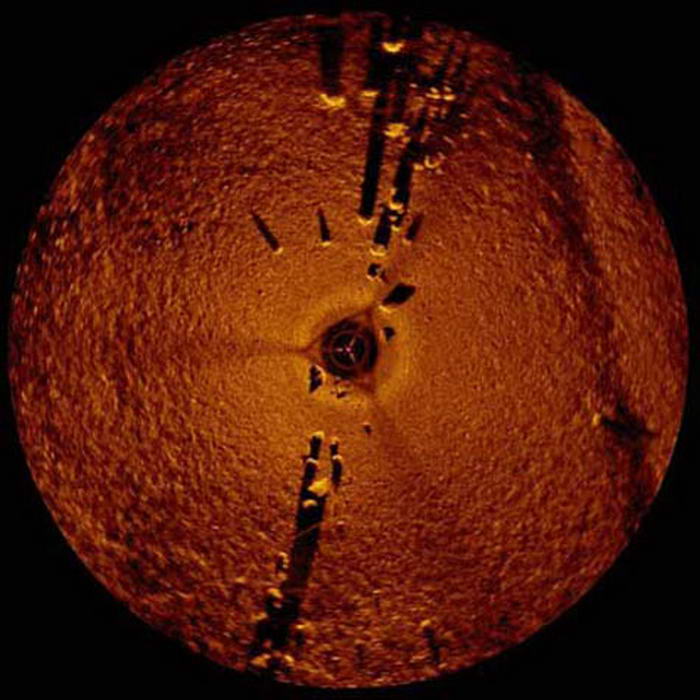 Archeologist from the nearby Northwestern Michigan College conducting surveys of the lake’s floor found a startling image when reading the data from their sonar equipment. Resting on the bottom appeared to a deliberately placed structure with stones equally spaced from each other. Among the carefully positioned stones was a boulder with etchings believed to depict the long extinct Mastodon. Michigan’s own Stonehenge has been speculated to be the remnants of a civilization that left similar glyphs in the surrounding areas. Much is still unknown of the origin and the age of the structure though. 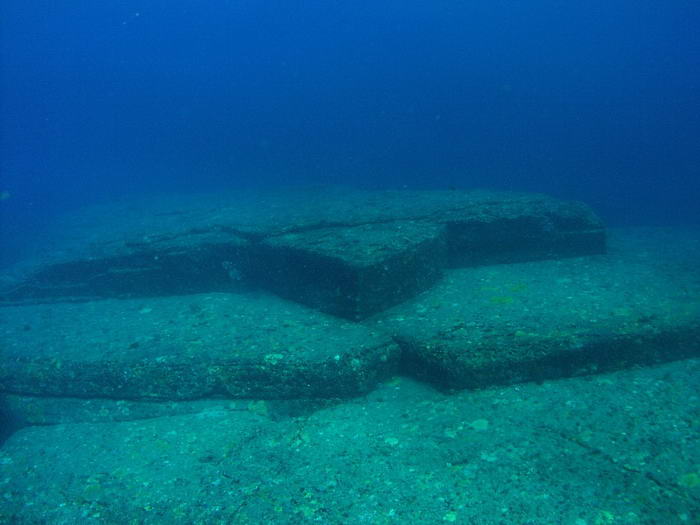 Located off the shore of Yonaguni Island in Japan, the large pyramid like formation lies covering an area of 300 meters just below the surface of the water. Scattered across the structure are the remnants and ruins of perhaps roads, temples, and even a pyramid believed to be dating back to a time when the area was still a land bridge connecting Japan to Taiwan. Though skeptics have pointed out the entire formation is easily explained as naturally breaks and erosion from the sea currents, photos depicting carefully cut walkways and steps seem to hint that the structure was created with more intent than those of shifting tides. 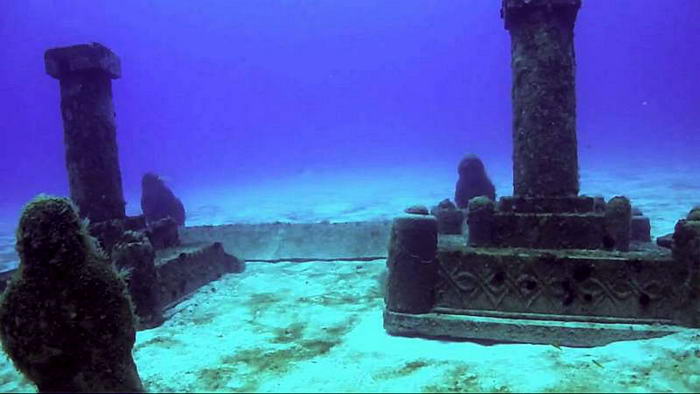 Oceanographers from India’s National Institute of Ocean Technology conducting surveys of pollution levels in the Cambay Bay discovered what appeared to be the remnants of an ancient city. Measuring eight kilometers in length and 3 kilometers in width the city would challenge the notion of how early large civilizations began to form in the area. Believed to be 9,000 years old if proven correct the sunken ruins would predate that of Mesopotamia.

04 – The Lost City of Thonis-Heracleion 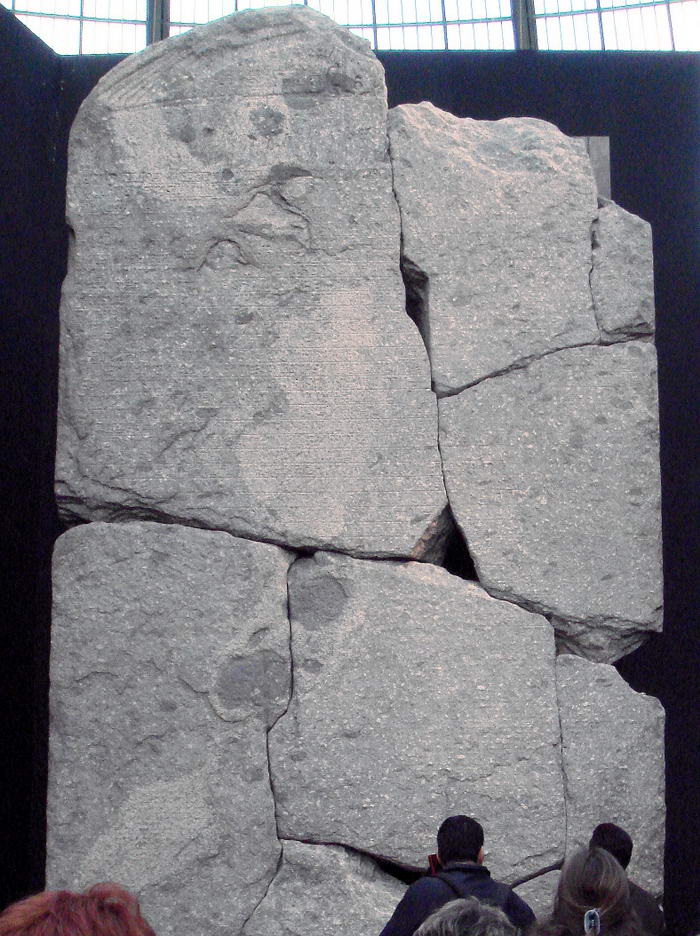 Thought to be only a legend, the city where Helen of Troy and her lover Paris sought refuge was discovered in 2000 by a French archeologist diving in the Mediterranean. More than 64 complete shipwrecks, as well numerous anchors, statues, and ancient vessels were pulled from watery depths of Abukir Bay where they now rest on display for world to see in London. Reasons as to why the once great port town of Thonis-Heracleion came to rest below the sea are not quite known but it is surmised that the ground beneath the very city liquefied in a known naturally occurring phenomena plunging the entire town into the depths. 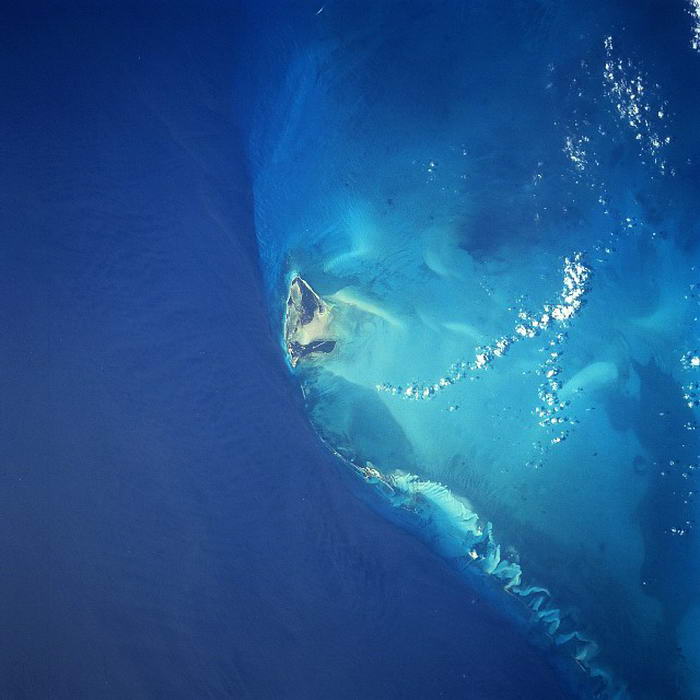 The legend of the lost city of Atlantis has been a source of wonder since first mentioned in ancient times. The city that lost favor with the gods and sank below the waters was believed to be found off the Coast of Bimini Island in the Bahamas when Joseph Mason Valentine and his diving crew discovered a kilometer long collection of giant stones forming an underwater road. Though numerous studies have declared the stones to be the product of erosion, many still believe the road holds a key to the final resting place of the lost city of Atlantis. 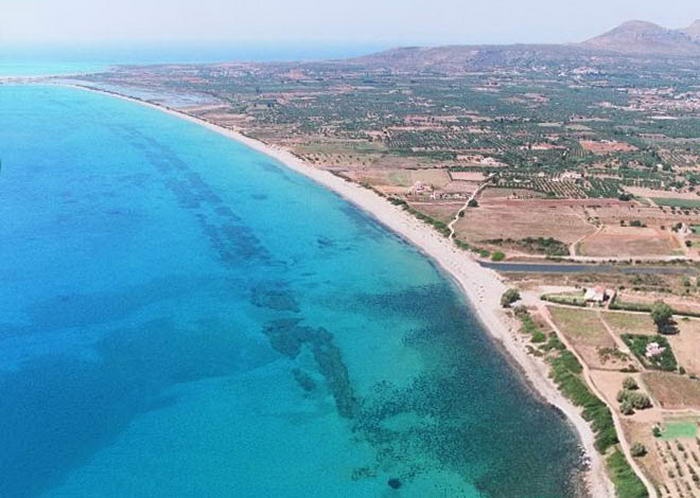 The oldest known sunken city was discovered only four meters below the waters of the Pavlopetri islet in 1904 by Folcionos Negris. The ruins contain some of the best examples of preserved roadways, homes, tools, as well as a burial site found in cities lost to the sea. The ruins themselves date back to 3500 BC and are as old as Homer’s Iliad. The reason as to why the city became submerged is not quite known but earthquakes are believed to be the driving factor for forcing the island town to its watery grave. 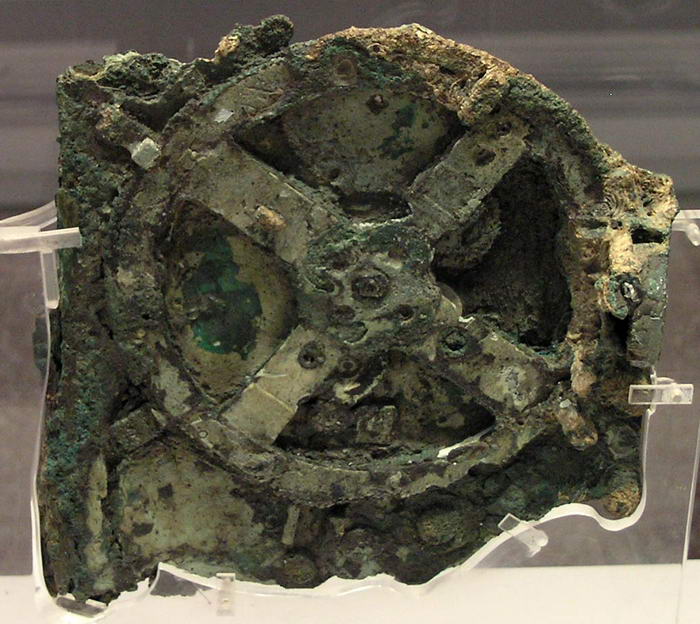 The Antikythera Mechanism – By No machine-readable author provided. Marsyas assumed (based on copyright claims). [GFDL, CC-BY-SA-3.0 or CC BY 2.5], via Wikimedia Commons

This mysterious treasure was found as part of an expedition in 1900 but went unnoticed until 1951 when a scientist realized that a collection of gears lie embedded in the stones pulled from the wreckage. The Antikythera Mechanism is said to be the oldest known example of an analog computer, used to predict the positions of celestial bodies. Much of the actual mechanism has been lost to time but a reconstructed version based on models seems to confirm its purpose as well as the existence of a manual of sorts for correct usage.