The top 10 gold mines in the world are based on 2014 and in some cases, 2015 production, because that is the last data which is updated for the entire gold mining industry. Some of the companies on this list include sites which publish their production totals each year. In listing these mining operations, we consider a mine to be any company’s self-contained operation, even if it includes one or more open-pit mines and underground mines.
For instance, Newmont might report data for its Carlin Trend mines separately, but they are located in close proximity to each other and represent a single mining operation. The nearby Goldstrike is another operation altogether.
At the moment, one gold mine doubles the production of any other single mine on the list: Muruntau. The Uzbekistani mine is a state-owned operation, which provides an advantage in exploiting the resource. Evidence suggests Muruntau is a remarkable resource for gold, because it has 2.5 times the estimated reserves than any other mine on the list has. 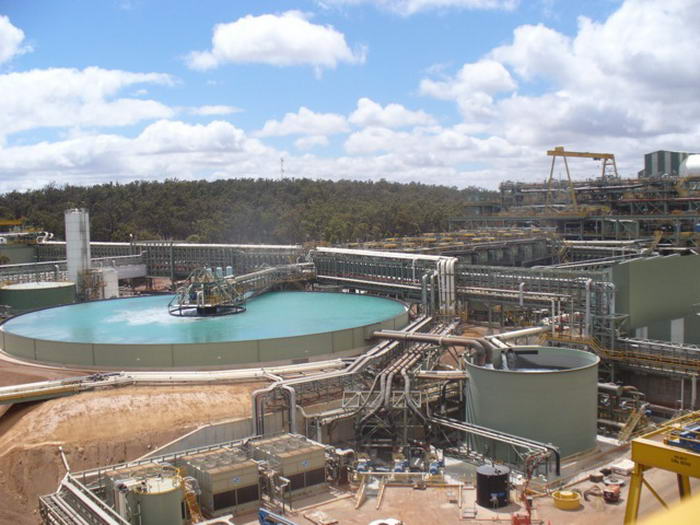 Boddington – By Calistemon (Own work) [CC BY-SA 3.0 or GFDL], via Wikimedia Commons

Boddington is located in Western Australia, about 76 miles from Perth. Boddington is an open-cut mining operation which surpassed the Super Pit (co-owned by Newmont and Barrick Gold) when it reopened in 2010. Boddington produced 700 thousand ounces of gold in 2014, while the Super Pit continues to produce in the 650 thousand to 690 thousand ounce range each year. Boddington is thought to have 20 million ounces of gold in reserve.
Operations at the Boddington Gold Mine began in 1987 as a joint venture of Normandy Mining (44.44%), Acacia Resources (33.33%), and Newcrest Mining (22.23%). Production ended in 2001, when the known oxide ore resource had been processed. In 2005, Newmont bought out Newcrest’s 22% of ownership. In 2009, Newmont bought Acacia’s 33%, giving the company a controlling interest in the Boddington Gold Mine. Production began the next year, quickly placing Boddington on the Top 10 list of top gold producing mines.
That completes the list of the top 10 gold mines in the world. As you can see, the list provides a glimpse of an ever-changing gold extraction industry. 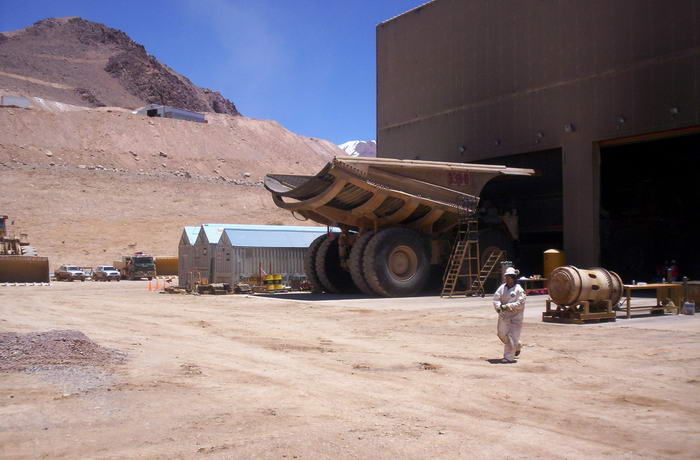 Veladero – By GRITTA, Antonio (Own work) [GFDL or CC BY 3.0], via Wikimedia Commons

Veladero is located in the San Juan Province of Argentina, adjacent to the Pascua-Lama Project (also owned by Barrick Gold). This places Veladero high in the Andes Mountains on the border between Argentina and Chile. The Veladero Mine has an estimated reserve of 10 million ounces of gold. In 2014, it produced 722 thousand ounces of gold and an additional 622,000 in 2015. Production increase from 600 thousand ounces to 700+ ounces year-to-year, so production appears to be on the rise.
In 2007, Barrick Gold installed a wind turbine at Veladero, so it holds the record for having the world’s highest-altitude wind turbine at 4200 feet above sea level. The nearby Pascua-Lama Project is located 25% in Argentina and 75% in Chile, where the mining operation has received criticism. The mines are near glaciers and Chilean activists complain about the operation’s effects on the environment. 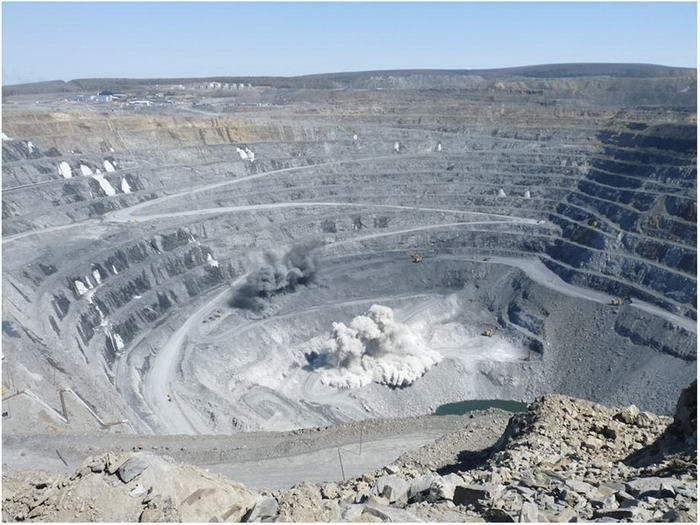 Olimpiada is the largest mine owned by Polyus Gold, Russia’s largest gold mining corporation. Olimpiada is located near Krasnoyarsk Krai, the third-largest city in Siberia. Olimpiada has estimated resources of 47.37 million and reserves of 30.01 million ounces of gold. In 2014, Olimpiada produced 727 thousand ounces of gold. To treat its sulphide ores, Olimpiada uses BIONORD, its proprietary bio-oxidation technology.
Polyus Gold is estimated to be the 8th-largest gold producer in the world. It is thought to have 90 million ounces of provable gold deposits spread over 5 mining operations in Siberia and the Russian Far East. Polyus Gold is the largest gold mining corporation listed on the London Stock Exchange (PGIL).
Polyus Gold’s owner is Suleyman Kerimov, the enigmatic Russian investor who has not granted an interview in over 20 years, according to Forbes. Mr. Kerimov made his fortune in the Russian oil industry, but began to delve into the gold and silver industries in 2005, when he bought JCS Polymetal. Polyus Gold’s current CEO is German Pikhoya, and the company headquarters are in Moscow. 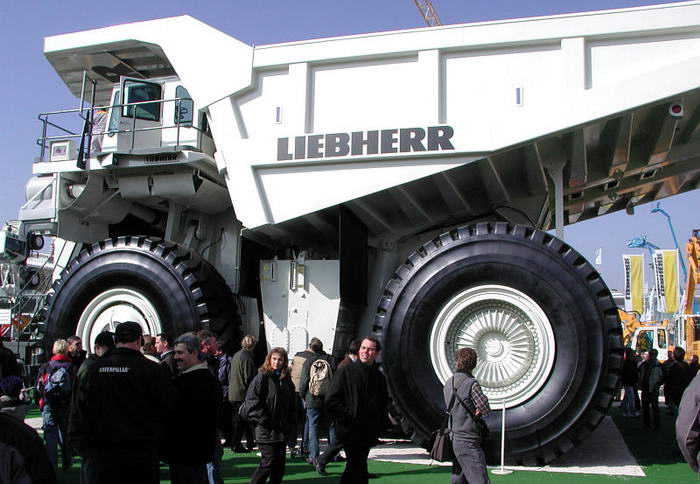 Cortez tied with Goldstrike in 2014 for 6th-place, but fell behind in 2015 with 900,000 ounces of gold. Cortez produced 1.338 million ounces in 2013, a 48% decline, due to step-by-step transitioning to underground mines.
The Cortez Gold Mine exists in Lander and Eureka Counties in Nevada. The open-pit and underground mining complex is located about 75 miles southwest of Elko. The entire complex includes the Cortez Hills underground deposit, as well as the Pipeline and South Pipeline open-pit deposits.
The Cortez Gold Mine is owned by Barrick Gold, which maintains its headquarters in Toronto, Ontario, Canada. 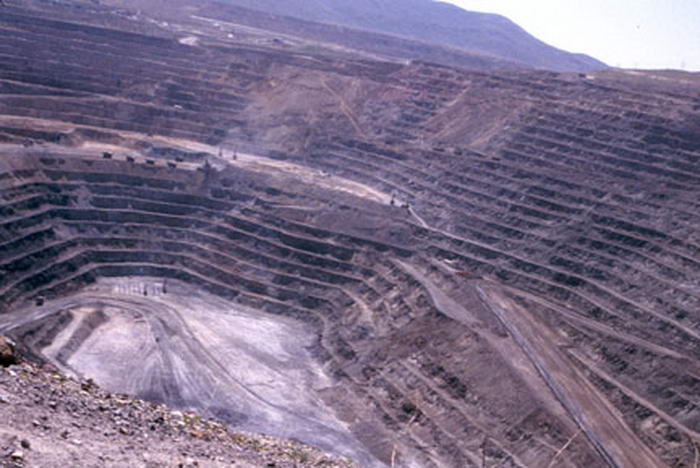 Goldstrike and Cortez actually tied for 6th-place in 2014, with 902 thousand ounces of gold produced. Because Cortez is on a rapid downward trend, it is reasonable to assume that Goldstrike produced more in 2015. The Goldstrike Mine is located northwest of the Carlin Mine on the Carlin Trend.
Goldstrike is owned by Barrick Gold, which acquired the deposit in 1987. Previously, the mine was owned by Western State Minerals Corporation and PanCana, which held it as a joint venture since 1978. Barrick Gold bought out the joint venture in 1987, the year mining began.
The mine consists of three operations. One is the Betze-Post open-pit mine. The other two mines are the Meikle and Rodeo mines, which are both underground. Goldstrike showed 1% growth from 2013 to 2014.

Carlin Trend in the United States is owned by Newmont, too. Carlin Trend is located in Nevada and includes open-pit mining and underground mining. The Gold Quarry contributed the majority of the 2014 yield of 907 thousand ounces of gold. That represented a decline from 1 million ounces in 2013.
The Carlin Trend is a 5-mile by 40-mile belt of gold deposits near Carlin, Nevada. Gold was discovered in the area in the 1870s. Due to the harsh conditions of the region, very little gold was produced there until 1909. Even until 1964, only about 22,000 ounces had been produced. From 1964 to 2008, the Carlin Trend produced 70 million ounces of gold, worth about $85 billion. 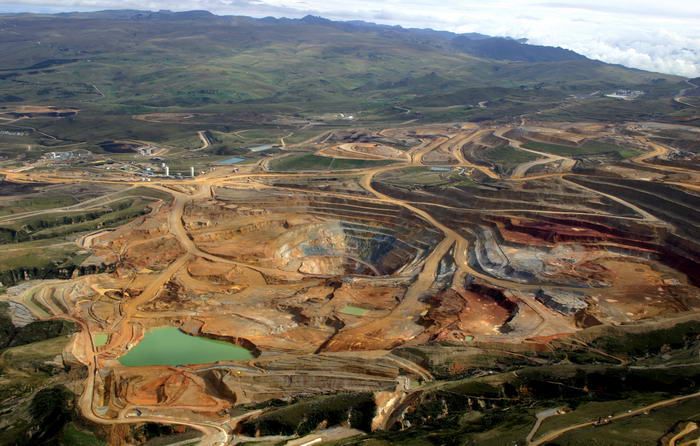 Yanacocha – By Elbuenminero (Own work) [CC BY-SA 3.0], via Wikimedia Commons

Yanacocha is part of a large-scale mining operation in the Cajamarca region of Peru. Yanacocha is located 18 miles north of the city of Cajamarca and 480 miles from Lima. The open-pit mine is considered the 4th-largest in the world, though it has declining production. The mine produced 970 thousand ounces of gold in 2014, down from about 1 million ounces in 2013.
Yanacocha’s majority owner is Newmont Mining Corporation (51%), a Colorado-based mining firm which is the second largest gold-mining firm in the world. The Peruvian company, Buenaventura, owns 44% of the mine. The World Bank Group’s International Finance Corporation owns the remaining 5%. 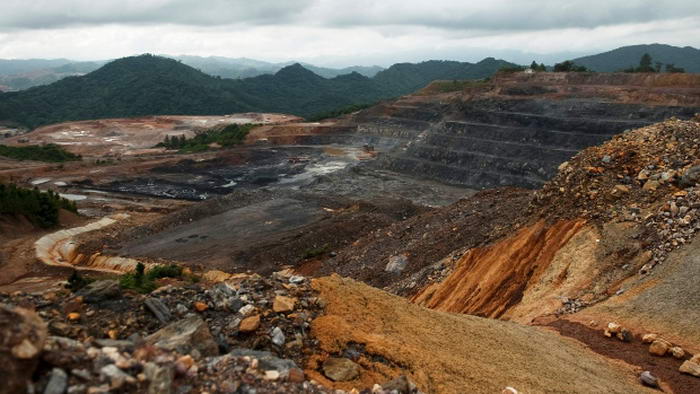 Pueblo Viejo is only slightly behind Grasberg. In 2014, the mine produced 1.108 million ounces of gold. Pueblo Viejo is brand new mining operation, as it was founded in 2012 as a joint venture of Barrick (60%) and Goldcorp (40%). The mine is thought to have significant reserves, so it should remain a vital source of gold for decades to come.
Pueblo Viejo is a small town on the southern coast of the Dominican Republic, located about 60 miles from Santo Domingo. Barrick’s operation is the latest in a series of projects on the site. The state-owned corporation Rosario Dominicana began mining the area in 1975, producing 5 million ounces of silver and gold over the next 16 years. When the price of commodities faced a downturn in 1991, the operation was closed.
Canada-based Placer Dome won a 33-year contract to exploit the mine in 2001. Barrick Gold, the largest gold mine corporation in the world, bought Placer Dome in 2006 and founded a corporation to mine in the Dominican in 2009. 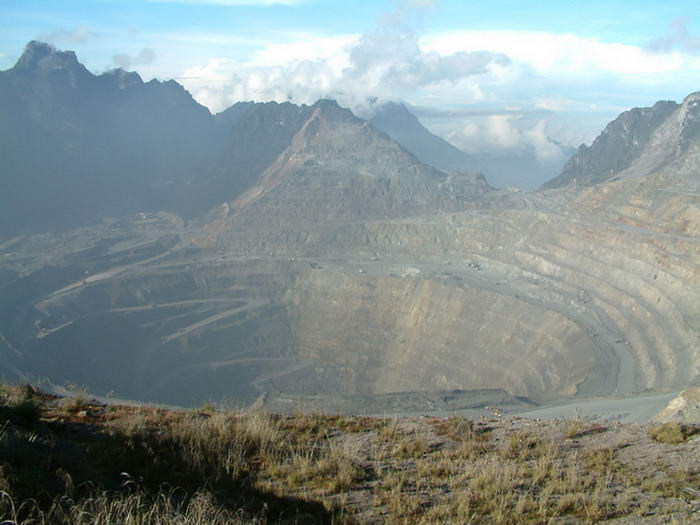 Grasberg mine in Indonesia was the leading gold mine for a long time. The mine is still advertised as the largest gold mine in the world, and the third-largest copper pit. At present, Grasberg is an open-mine pit, but it is transitioning into a high-grade underground block caving operation by the end of 2017. In 2014, Grasberg produces 1.1 million ounces of gold.
The owner of Grasberg is Freeport-McMoRan, which owns 90.64% and employs 19,500 employees. The Indonesia government owns the remaining 9.36% of the mine. The Grasberg Mine is located near Puncak Jaya in Indonesian New Guinea. Puncak Jaya is the highest mountain in Papua, and therefore extraction is a particularly laborious process.
Dutch geologist Jean Jacques Dozy discovered the mine in 1936, though it was not until 1960 that George Mealey (Freeport-McMoRan CEO) and Forbes Wilson mounted an expedition to prove its value. When Indonesia gained independence in 1963, Grasberg became the first mine opened by the Suharto government. 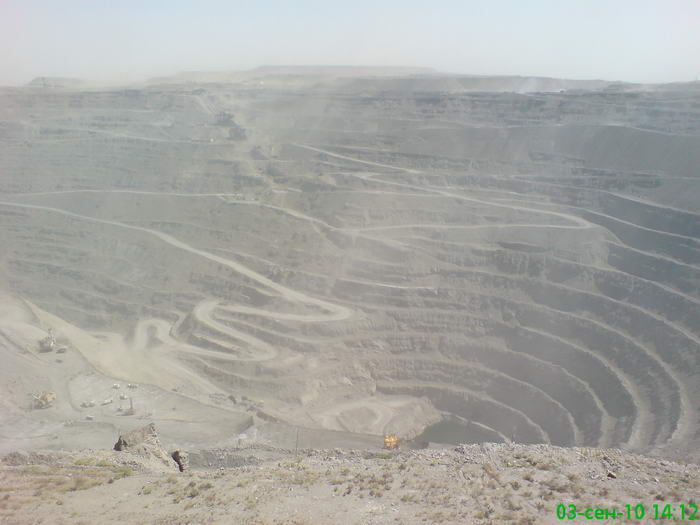 Muruntau – By Carpodacus (Own work) [CC BY-SA 4.0], via Wikimedia Commons

Muruntau in Uzbekistan took over 1st place from Grasberg in recent years. In 2013 and 2014, the competition was not even close. Muruntau produces 2.52 million ounces of gold in 2013 and 2.6 million in 2014. This huge open-pit mine is estimated to have about 170 million ounces of gold left, so the mine could be a leader for another 60 years, at current production levels.
Muruntau is owned by Navoi Mining and Metellurgical Combinant, which is owned by the state of Uzbekistan. The division of Navoi Mining which handles the Muruntau deposit is the Central Mining Administration (CMA), which was founded in 1964 as a part of the Soviet Union’s gold mining operations. Navoi commissioned the world’s biggest BIOX plant to deal with the depletion of oxide reserves.