Most people play online slots, or pokies as they’re called in Australia hoping to win a couple of millions, a couple of hundred thousand, or at least few grand. That is the primary incentive, even though playing slots can be quite fun in itself. Judging by some of the prizes that were won by people who managed to hit a progressive jackpots that is not unusual. Who wouldn’t want to win over $10m?! However, slots can be paid just for fun as well. There are lots of apps and online casinos that offer slots which can be played just for fun. Currently, there are thousands of pokies are available in the Google app store for free. Most of the players that won incredible multi-million amounts, choose to remain anonymous for obvious reasons, yet some decide to disclose their identity in public. Nowadays progressive jackpots are slightly larger than 5 or 6 years ago and the fact that 9 out of the 10 biggest slot prizes were won from 2012 onwards.

Nothing better than winning several millions before Christmas, right?! That’s exactly what happened to John from the UK in 2012. John Orchard from Lincolnshire tried his luck on the Mega Moolah Mega progressive jackpot game at Butlers Bingo with only 30p and won a staggering amount of £5,882,594. The bloke couldn’t believe his luck and later stated that his initial plan for Christmas was to buy an iPad for his daughter, but that after the award he can afford a new house and everything he wants. Mega Moolah was released in 2006. John won the highest jackpot up until then on this popular Microgaming slot.

The ninth biggest win also happened in December. A player from Sweden who chose to stay anonymous won €7,530,141 on the Hall of Gods Mega slot game at Betsson Casino. Some massive jackpots have been won on this game and this wasn’t even the highest jackpot that year. Nevertheless it is enough to be included in our list.

The 8th luckiest was also from Sweden. This woman played Hall of Gods Mega at Unibet Casino and she won an amazing amount of €7,673,975, just slightly higher than the 9th highest win. A press release issued by Unibet stated that the woman was ecstatic, claiming that she’s living her dream. This occurred on February 8th, 2012.

The seventh biggest jackpot prize was also won on Hall of Gods Mega, again at Betsson, also in 2015, like number 8. The player chose to stay anonymous and we know that she or he was from Norway. The jackpot was hit on the 18th of April.

The sixth largest prize was won by another player that hails from Scandinavia. Alexander from Sweden won €8,577,104 on Mega Moolah Mega on the 28th of November 2015. The prize was won through ComeOn Casino. Alexander was 30 years old at the time he won and he was playing the game on his mobile device. He stated that he’ll pay out his mortgage, treat himself and his wife with a holiday or two and that he’d probably buy a new car.

The fifth prize went to a Finnish player who chose to stay anonymous. The lucky guy or gal was playing Arabian Nights at Paf Casino on the 23rd of November 2012, when s/he had his/her share of fortune and won an astounding €8,635,872.

This jackpot was won by an Australian player Mega Moolah Mega on the 8th of April 2016 at Spin Palace Casino. This is only the second largest jackpot won on this game. This lucky Aussie won $10,423,223.

The third biggest jackpot win is also the only one amongst the top 10 which occurred prior to 2012. A Norwegian student from Hordaland managed to win €11,736,228 on Mega Fortune Mega. The jackpot amount has been accumulating for more than 6 months until that September 23rd. The man was playing at Betsson. He claimed that he was usually only betting on sports at Betsson, but when he saw the prize, he decided to give the slot a try. It is surely the best decision of his life. He only placed a €0.50 wager.

We have our second Finnish player on the list for the second highest win. This person who chose to stay anonymous won €17,861,813 on Mega Fortune Mega. This player also played at Paf casino, just like the other Finnish person on the list. This prize was won on the 20th of January 2013 and was recorded by the Guinness Book as the highest prize at the time. A Paf Casino representative said that everybody at the company is very happy about the fact that one of their players won a massive jackpot again, whereas NetEnt’s CEO stated that they hope to turn even more ordinary people into millionaires in the following years.

This record beats the second prize by just €18,777. The total amount of the highest jackpot prize ever was £13,212,882. The jackpot was won on Mega Moolah Mega at Betway Casino. Jon Heywood is the name of the lucky chap. Jon will surely remember the sixth of October 2015 for the rest of his life. With this win, coming from a wager of only 25p, Jon entered the Guinness Book of Records. The 26 year old Jon was serving as a soldier in the British Army who has previously been on a mission in Afghanistan. He said that the first thing that he’d do with the money is pay for his father’s medical care. Jon stated that the whole experience was quite surreal and that he spent some time staring at the screen, not believing his luck. 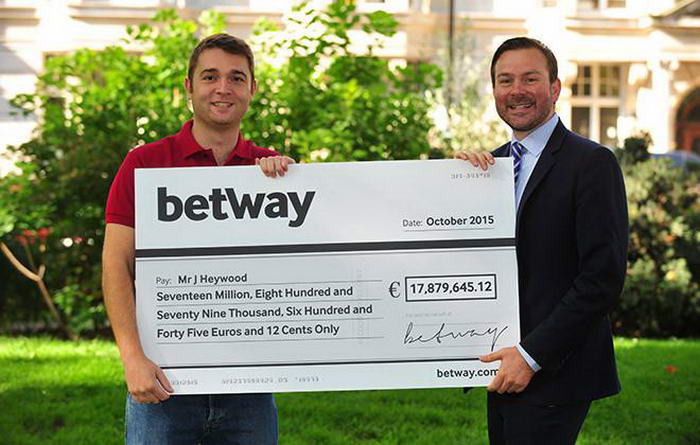