Ancient Rome was a cradle of civilization and culture. Next to Ancient Greece, it was the most important place for the development of Europe as a whole. This did not mean it was a fluffy or soft period in history though! The Roman Empire was often a very cruel place and this can be seen in the grisly punishments that were used on people.
But which were the ten most brutal to know about?

Although only at number 10 on our list, do not underestimate how cruel and nasty this was. The only saving grace was that a live donkey was not used! Instead, the animal was killed first before having its entrails removed. The accused criminal or unfortunate slave was then stripped before being stuffed into the animal’s body.
The animal’s belly was then stitched back up and left only the head of the person inside showing. This stopped them from suffocating and prolonged the punishment. Although you might think this was not so bad, the animal’s body would be left out in heat and whoever was inside would slowly cook. The decomposing carcass would also start to crawl with maggots and vultures would peck at them!

This was a punishment described by Saint Gregory first and normally performed on young women deemed to have done wrong under Roman rule. This was a really horrible way to die and just shocking in its barbarity. First, the unfortunate victim would be stripped and have her stomach sliced open by gladiators. After this, her stomach was filled with barley and then sewn back up. This was not the end though! Finally, she would be chucked into a pen with fierce, wild hogs who would tear her apart whilst still alive.

It is key to note that the Ancient Romans were just as cruel to men as they were to women. In fact, they were truly inclusive in the punishments they handed out to everyone! It was also a vicious place in terms of sexuality, where it was accepted that you could have sex with whoever you liked – as long as you were higher status than them.
The Emperor for example could have anyone they liked and a solider could have any citizen he fancied. It was seriously not ok though for lower class people to make a move on higher class people. If a common citizen for example had sex with a soldier, they were castrated publicly! If the soldier in question had willingly gone along with it, he would be disemboweled publicly next to them.

One of the most vicious and hated Emperors in Roman history was Tiberius. While Caligula might get a lot of the bad press, Tiberius was not far behind! Always in a bad mood, the only thing which cheered him up was thinking of ways to inflict pain on people. One of his favourites was known as Full Bladder Punishment. This saw him invite men over to his palace for drinks and ply them with wine. He would then have them forcibly held down while their penis was tied shut. He would then force them to continue drinking alcohol as they suffered the true agony of not being able to urinate.

We have already mentioned Caligula and it is true to say he was pretty nasty. One favourite Roman punishment under his rule was known as Hot Pincer Punishment. This was used many times on normal people but was most famously a punishment given to a senator who displeased Caligula. This saw the poor victim have their stomach slit open, their organs ripped removed with hot pincers and then their eyes torn out. After letting them suffer a little, they would be cut in half and then ripped to pieces. It seems the main point of this was to cause as much pain and terror as possible! 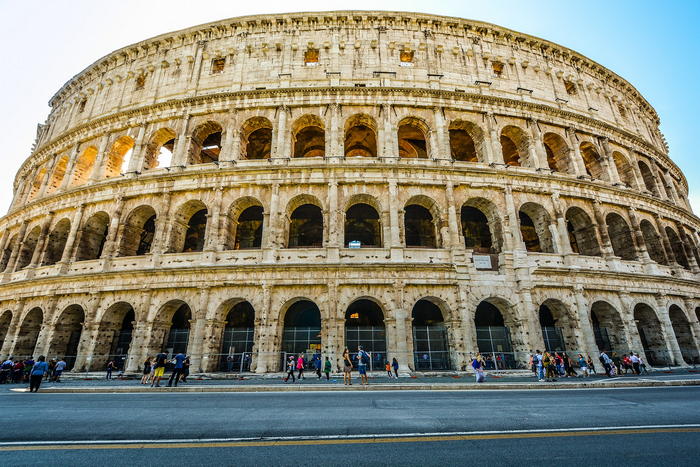 Another Emperor who seemed to enjoy thinking up Ancient Roman punishments was Domitian. He particularly liked making Christians suffer it would seem. One horrible but common way was to nail people into a barrel. Before they went in, they would be covered in honey and milk before being force-fed food ridden with parasites. One nailed into the barrel, they would be left there as the parasites ate them from the inside. After their rotting body finally gave up, death would be a sweet release.

Being buried alive is a fear most people have and this is something that Ancient Rome used to punish criminals. It was though also sometimes used to punish innocent people for pleasure or relatively minor infractions! A good example of this is the Priestess Rubria being sealed alive inside a small cave and left to starve to death. Her only ‘crime’ was not being strong enough to stop Emperor Nero forcing himself on her! To give this punishment a further twist, people would sometimes be made to dig their own grave before being pushed in and buried alive.

Executioners in Ancient Rome sometimes used animals to carry out their punishments. This particular example started with a starved animal (such as a rat or cat) being placed inside a metal bucket. The bucket would then be upturned and the opening firmly held or fixed to the belly of the victim. The upturned bucket would then be heated up slowly and in turn make the inside very, very hot. Of course, the trapped animal inside would be desperate to get out and dig through the only soft way out they could find – the victims stomach! Truly horrible.

Very often, Ancient Roman punishments were not only truly nasty but also downright bizarre. A good example is the basket of bees punishment. This saw the victim stripped and stuffed into a large wove basket. This basket was then hauled high into a tree and next to an active beehive. This usually angrily the bees and they would soon attack the person in the basket, stinging them to death. While this could take a while, the lucky ones died quickly due to allergic reactions to bee stings.

You might think that this type of punishment was unusual and only reserved for special cases, such as Jesus. However, crucifixion was actually a very common way to punish people and put them to death in Ancient Rome. Interestingly, this punishment did not always involve being nailed to the cross and hung up right away. Many times, the victim was simply stripped and tied standing up onto a cross before being flogged to death. If they survived the flogging, they would then have their hands nailed to the cross and be hauled up onto a planted post. This would then usually see his feet nailed to the post and being left there to die. Sometimes, the accused would even be crucified upside down! As you can see, this is a terrible way to go.

Although many civilisations in the past have come up with some horrible ways to punish people, Ancient Rome is up there with the best. As the above shows, they really did have some nasty and disgraceful way to punish people – often when they were innocent!