We all know the story of Jesus and the totally gnarly way in which he eventually died before coming back and then ascending to heaven. For those who skipped Sunday school, the founder of Christianity was whipped, beaten, marched through the streets with a big wooden cross to carry before being crucified. To say that it was a little extreme is an understatement!
However, when you take a look back at the origins of the Christian faith and the Saints now held holy by the Catholic church, it did not get much better. Many of them actually suffered a fate as bad if not worse when the early Christians were being persecuted. Many of these deaths were very bloody and would have been very painful indeed. We take a look at the ten most bloodthirsty and diabolical ways some Christian saints were put to death. 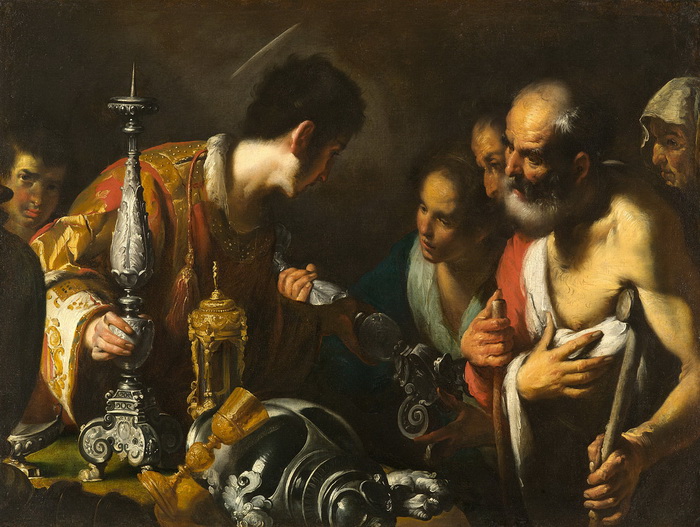 Before he was granted sainthood, Lawrence was a priest who had responsibility for looking after the Christian church’s money. The problem he faced was when he gave all of it away to the poor in a true following of Christ’s teachings. When the ruling Roman government demanded he produce the Churches money, he could not as he had none left. This made them very angry and led to him being strapped onto a huge metal grill and roasted alive over hot coals. 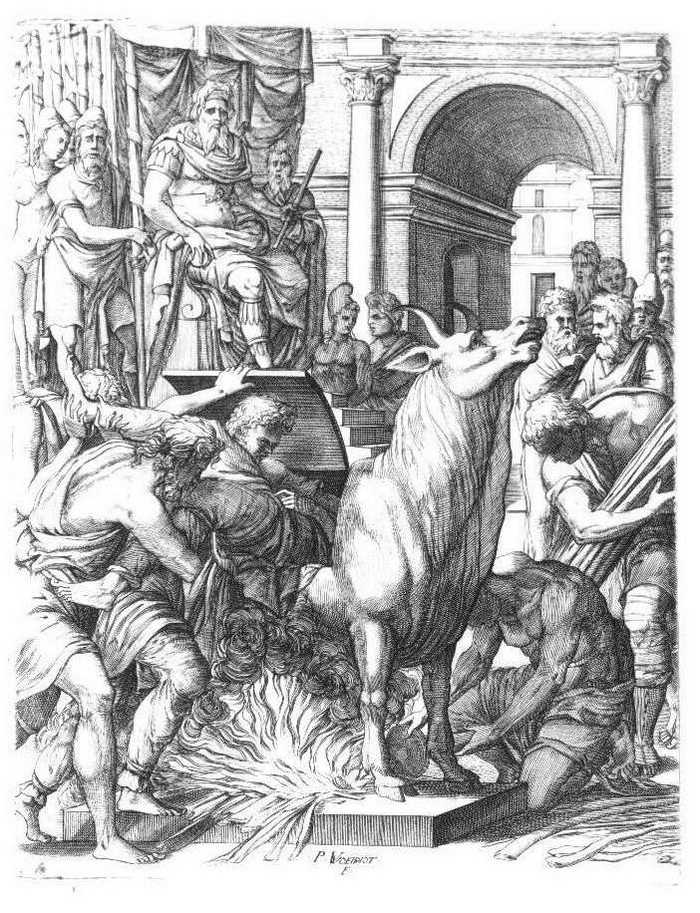 Yes, this is another death which involved being cooked alive but is worth mentioning for the method used. The Bronze Bull device was as it sounded – a life size statue of a bull, made from bronze. The cruel secret it hid was a hollow body where someone could be placed inside and then locked tight. When the bull was placed over a roaring fire, the bronze design meant they baked alive inside! Even weirder, there were a set of pipes and tubes that made the screams of the person dying sound like the bellows of a real bull! Not a great way to go as Saint Antipas found out.

08 – Saint Aphian – Beaten and Thrown into The Sea 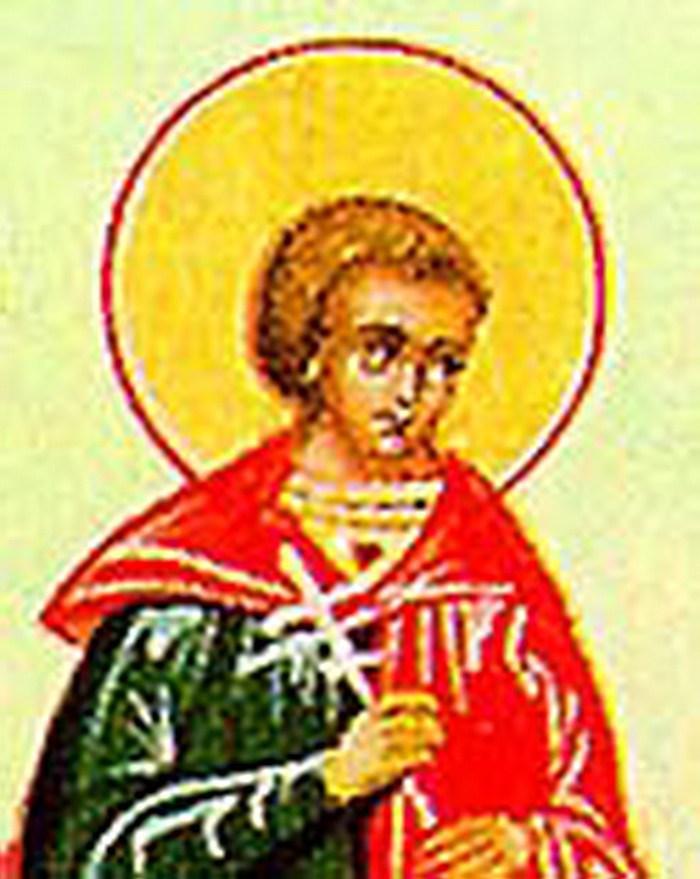 Saint Aphian lived in the city of Caesarea Maritima and was only 18 when he died in gruesome fashion. It was all the more shameful as he had only recently converted to Christianity. The story goes that he publicly berated a Pagan magistrate for the ritual sacrifice he was about to carry out. Enraged, the magistrate had him arrested and he was kept inside a dungeon and beaten for many days. After this, he was taken out of the dungeon to have his skin torn with metal claws and cooked over an open fire. Still alive, he was then thrown into the sea with stones tied to him. 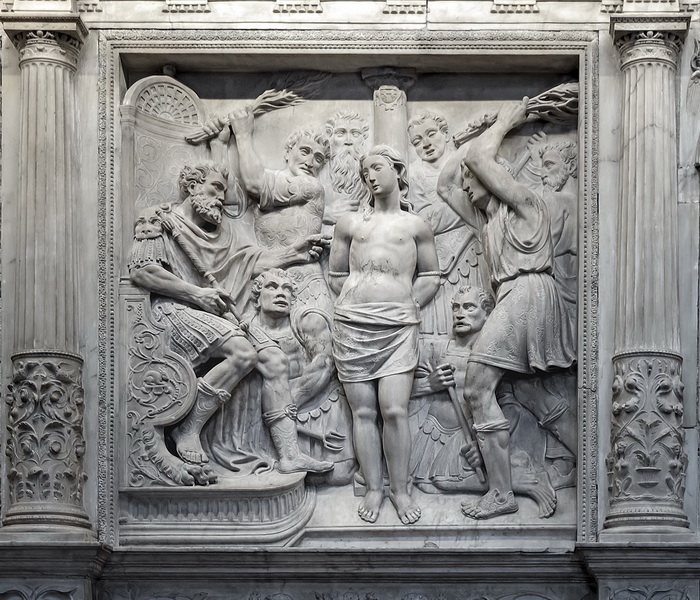 Not a lot is known about Saint Eulalia other than she was just 13 years old when killed and the story is pretty terrible. The Roman rulers where she lived were so incensed by her refusal to recant Christianity that they gave her 13 separate tortures to endure before death – one for each year of her life. The most famous one was being placed in a barrel filled with knives and broken glass which was then rolled down a hill. This did not actually kill her though – that dubious honour went to being crucified on an X shaped cross and then decapitated. 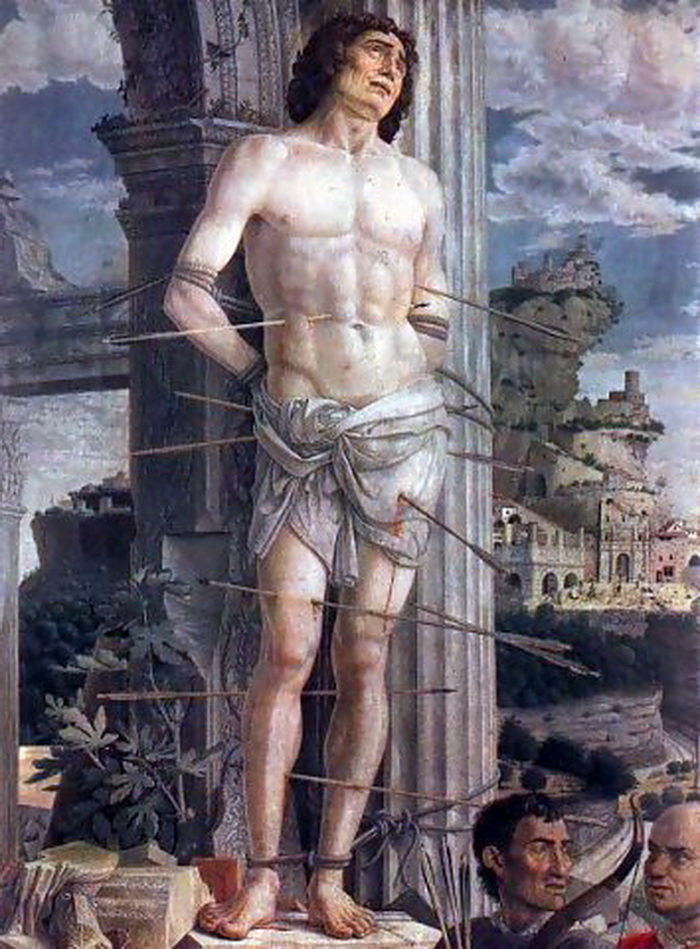 The Roman Emperor Diocletian got proper mad when he found out that Saint Sebastian was in fact a Christian. This led him to ordering soldiers to tie Sebastian to a tree and shoot loads of arrows into his body. What is a bit crazy about this is that it didn’t kill him! On finding that Sebastian had survived, he sent more soldiers to beat him to death with wooden clubs. This finally did the job in the most brutal and painful way possible. Interestingly, Saint Sebastian is now the patron saint of archers which seems ironic to say the least.

05 – Saint Euphemia – Tea For Lions and Then A Bear 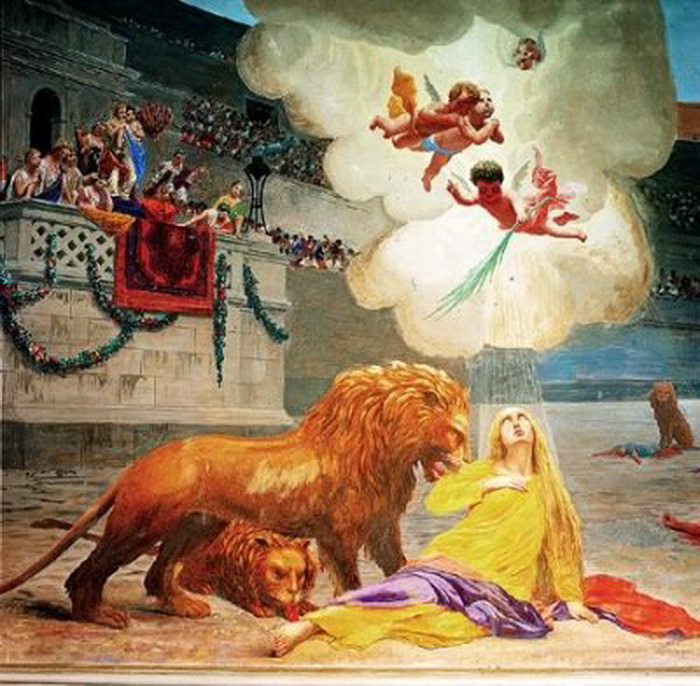 Poor old Saint Euphemia! If getting eaten by one wild animal wasn’t enough, she was tea for two. Euphemia had been caught refusing to take part in a Pagan ceremony near modern day Istanbul and also worshipping God. The Romans did not take kindly to this and ordered the local Roman forces to torture her for information. When this did not work, she was sent back to Rome where soldiers there tortured her further. With Euphemia steadfastly refusing to talk, the Emperor Diocletian sent her into the Colosseum to be fed to the Lions. When they did not do the job, he set an angry bear on her instead.

04 – Saint Romanus – Hung After Having Tongue Cut Out 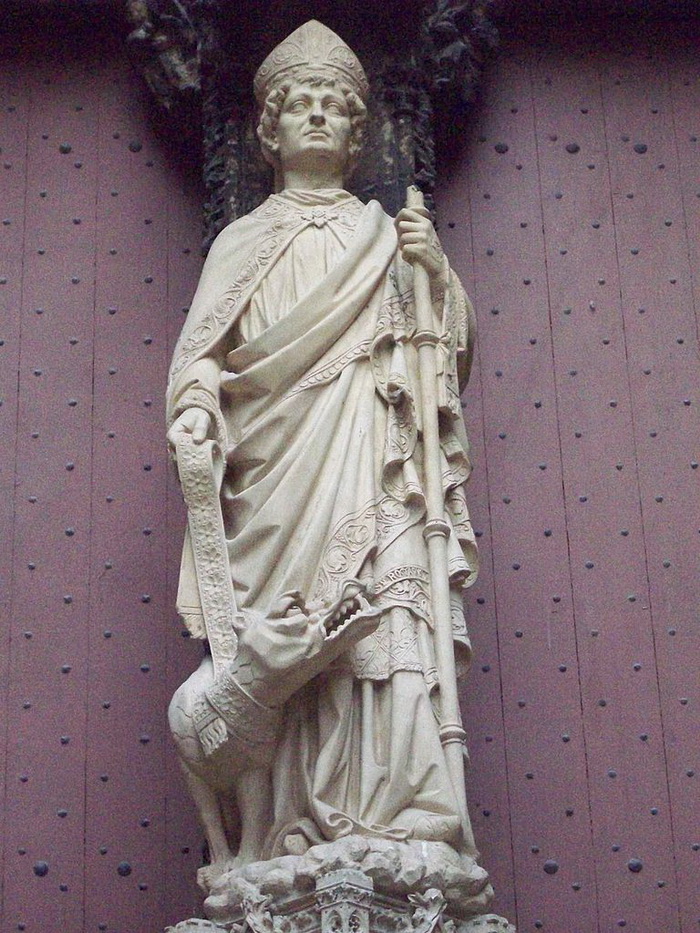 Saint Romanus was a well-known preacher and promoter of Christianity when alive. This eventually got him into trouble with Emperor Galerius and the Governor of the town he lived in. Initially, they planned to burn him at the stake but rain kept putting out the fire. As this farce unfolded, Romanus kept praising God which so annoyed the Roman officials gathered that they ordered his tongue cut out. When the fire would still not start, they choose to hang him instead. 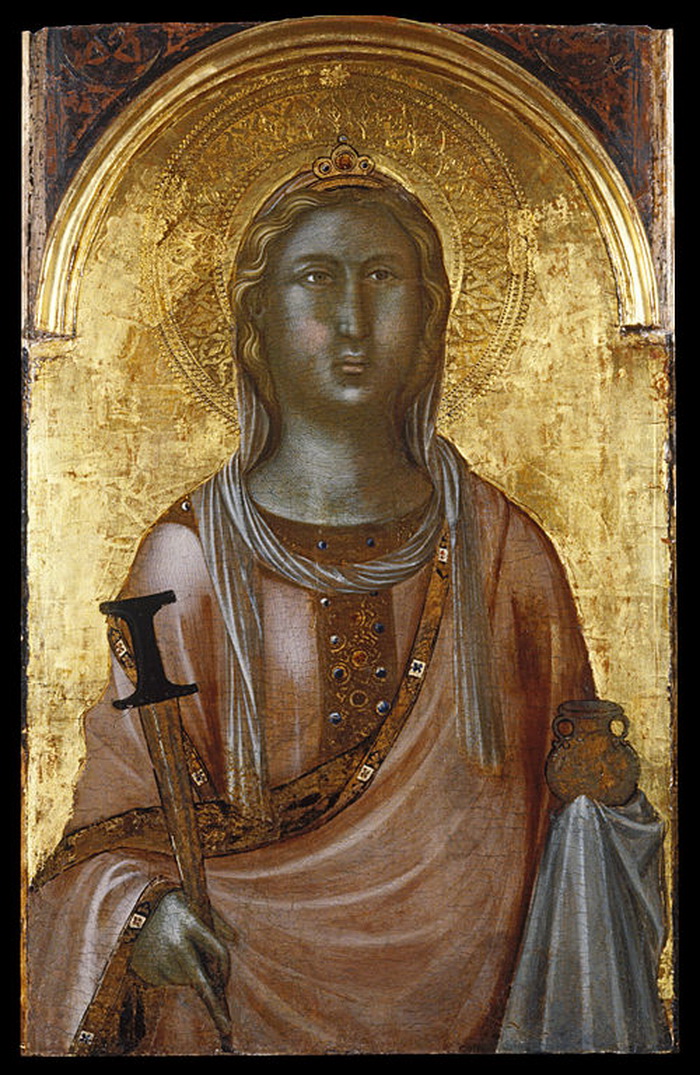 Saint Lucy lived in the ancient region of Syracuse and actually came from a wealthy family with lots of money. Her mother, unaware of Lucy’s Christian faith, made arrangements to wed her off to a local Pagan noble. Unfortunately, this did not go according to plan! Lucy persuaded her mother to give their wealth away to the poor in line with her own Christian faith. News of this Christian charity not only saw the Pagan noble denounce her but upset the Governor of Syracuse. In revenge, he had her defiled in a brothel against her will before ordering her eyes gouged out. The final death knell was being struck with a sword. 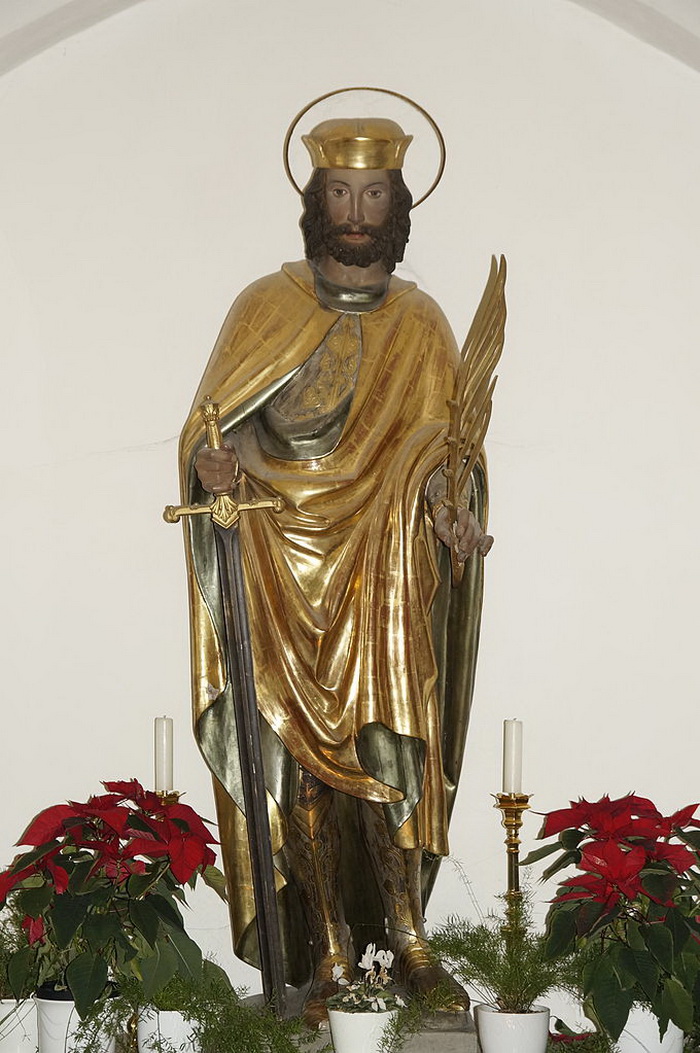 Amazingly this Christian saint worked as a valet for the Christian hating Roman emperor Diocletian. Castulus would use his access to hold Christian services in the Emperor’s palace in Rome and he actually converted many people. When he was grassed up by another worker at the palace, things did not end well for him. After being soundly tortured for a few days, he was buried alive under a sand pit and left to rot on the outskirts of the city.

01 – Saint Philomena – Everything Pretty Much 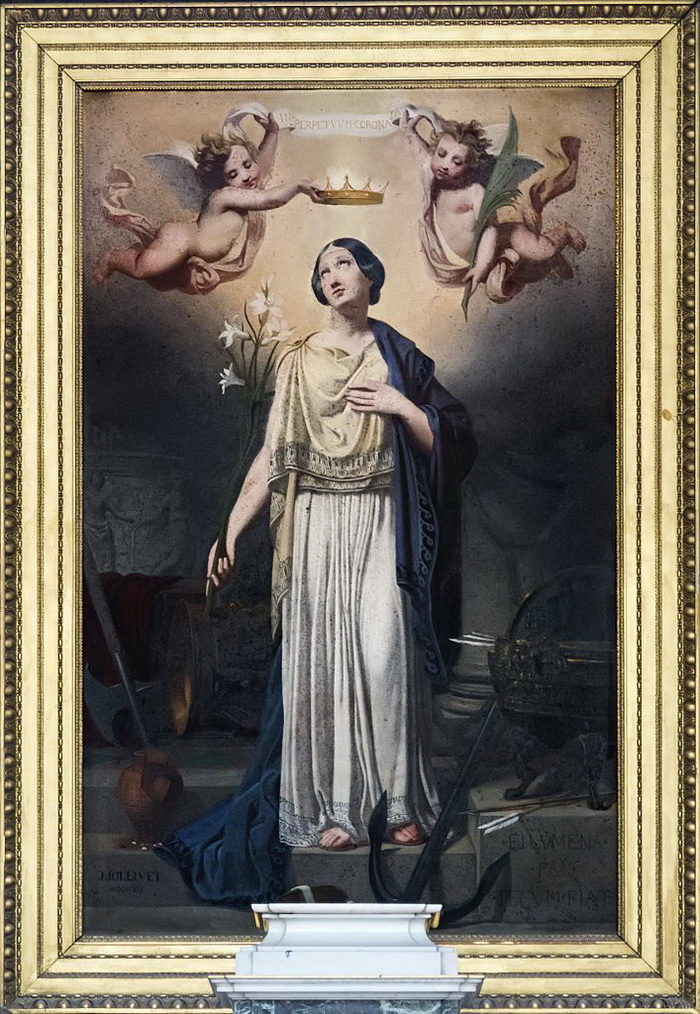 The death of poor Saint Philomena tops the list purely for the list of things she endured. She was originally a Greek princess who, like her family, converted to Christianity. This did not sit well with Emperor Diocletian who threatened to wage war on the whole family if she did not marry him. Naturally she refused and Diocletian went crazy. First, he whipped her severely before trying to drown her in the ocean. When this failed, he had her shot full of arrows before being decapitated to finish the job.

As you can see, although Jesus had it hard, the early Christian saints who followed him suffered a lot too. The ruling Roman authorities at the time were so afraid of Christianity spreading and so eager to keep it in check that they went far over the top in terms of punishments. Luckily, things have calmed down a lot in the modern age!