If there was an award for the most brutal, genocidal leader in history then Genghis Khan’s name would be in the hat. Known as ‘King of the Mongols’, he united the many nomadic tribes in the area under his command and led them to new heights. His many campaigns were notable for their ferocity particularly against civilians and the cruel punishments he meted out were notorious (and often very inventive!)
Regarded as the founding father of Mongolia, he is revered by his people for the many advancements they saw under his rule such as implementing meritocracy and religious tolerance. It was just that if you were his enemy or managed to get on his wrong side, you would know about it!
We run-down ten of the most notorious and crazy facts about his life:

10 – He Took Brutal Revenge Against A Khwarezmid Governor 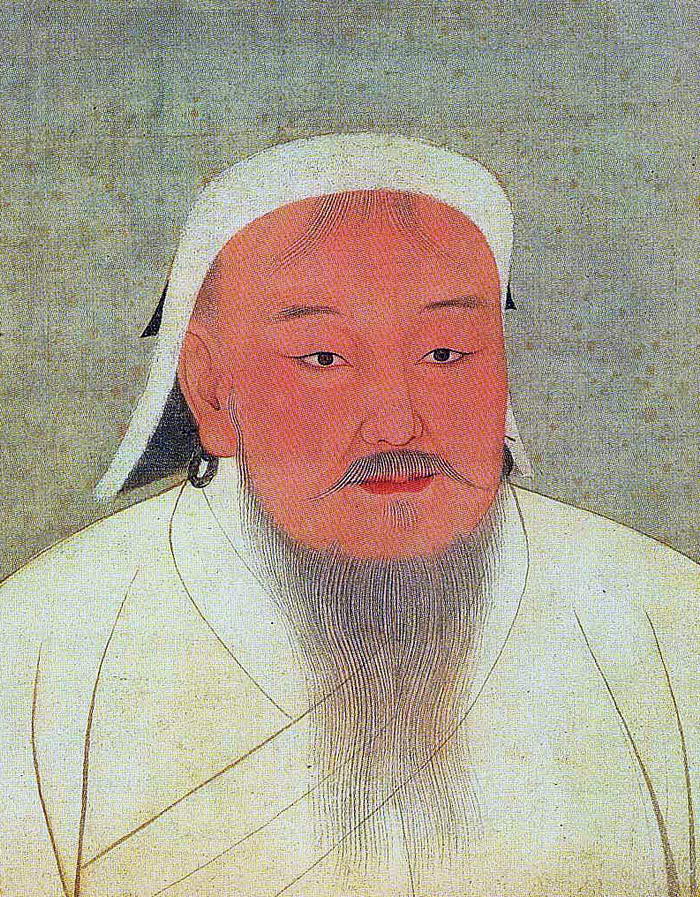 If ever one example summed up why you didn’t want to upset Genghis Khan, this is it! The story goes that our friend GK had sent a trading caravan into the Khwarezmid empire where the local Governor of a town seized it and killed the traders.
This turned out to be a very bad move! So enraged was ‘The King of the Mongols’ that when the governor was caught, Khan poured molten silver into his eyes and mouth. This was after invading the Khwarezmid empire with 10,000 men and doing a whole load of killing. Not content with that, he even had a river diverted so it passed straight through the village the governor had been born in, wiping it off the map forever. This was obviously the days before anger management!

09 – He Killed Millions During His Reign 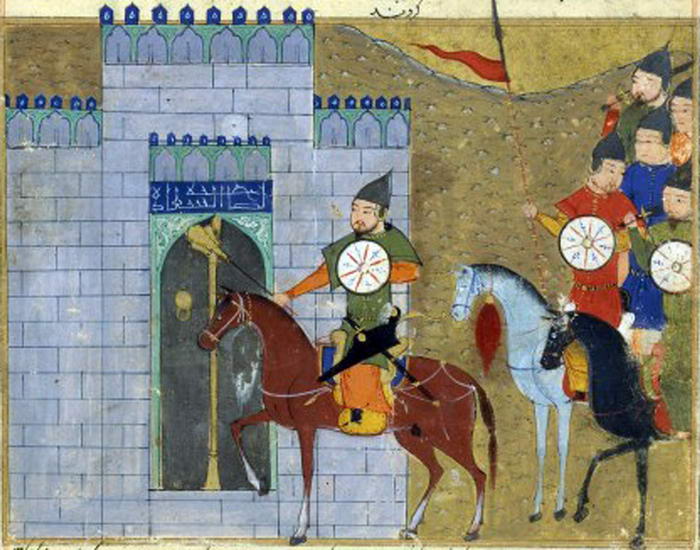 This is one for the stat guys out there – during his rule, it is thought that Genghis Khan killed 40 million people. That’s right – 40 million! This just shows what a genocidal and completely blood-crazy dude he was. An interesting side-effect of all these people dying, is that it might have contributed towards global warming due to the amount of carbon removed from the atmosphere. It would have cooled the planet though rather than warming it as is the problem in the modern age.

08 – He Made His Daughters Rulers After Marrying Them Off 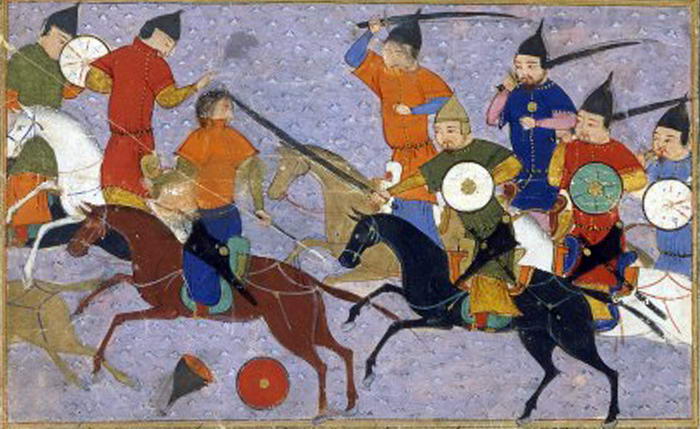 To be fair to Genghis Khan, he was also pretty cunning and clever as well as liking a good scrap. A classic trick of his was a superb way to expand the Mongol empire but in diplomatic fashion. He would marry off one of his many daughters to the King of an allied nation he wanted to take over and then send his new Son-in-Law out on the Mongol wars where he would inevitably die in battle. This would leave GK’s daughter as ruler in name although Genghis would really be the one wielding power. In this way, the allied nation would be part of the Mongol Empire under his control. 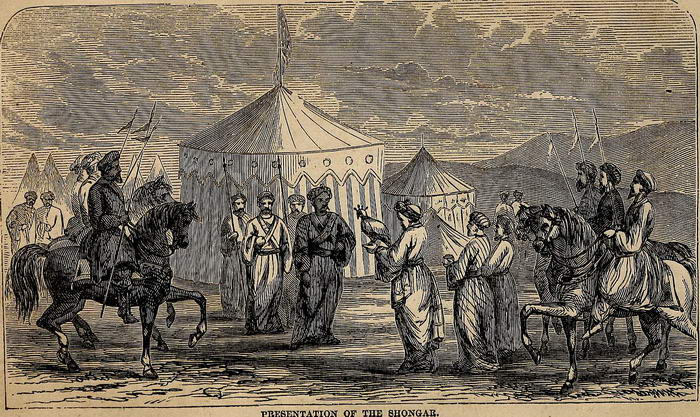 After battling the Russian army and gaining a hard-fought victory, Genghis thought there was only one way to properly celebrate. He ordered that the surviving Russian prisoners were laid on the ground while huge wooden gates were put on top of them. The whole Mongolian army then sat at a banqueting table on top of these gates and made merry while the poor Russians below were crushed to death. 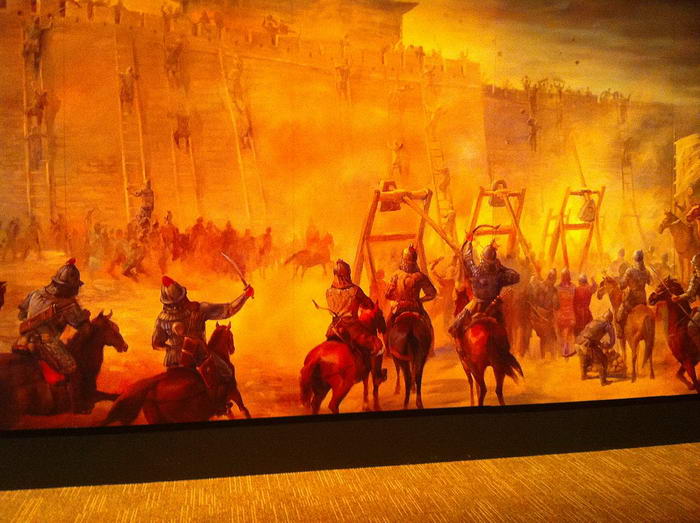 Mural of siege warfare – By Bill Taroli (Mural of seige warfareUploaded by clusternote) [CC BY 2.0], via Wikimedia Commons

Historians believe that Iran was one country that felt the wrath of Khan especially. It is thought that so many people were killed on the Iranian plateau that the population levels did not reach pre-GK levels again until the mid-20th century! When you consider he was in power around 1250, that tells you just how many people he must have massacred during his campaigns there.

05 – He Oversaw The Ransacking of Baghdad 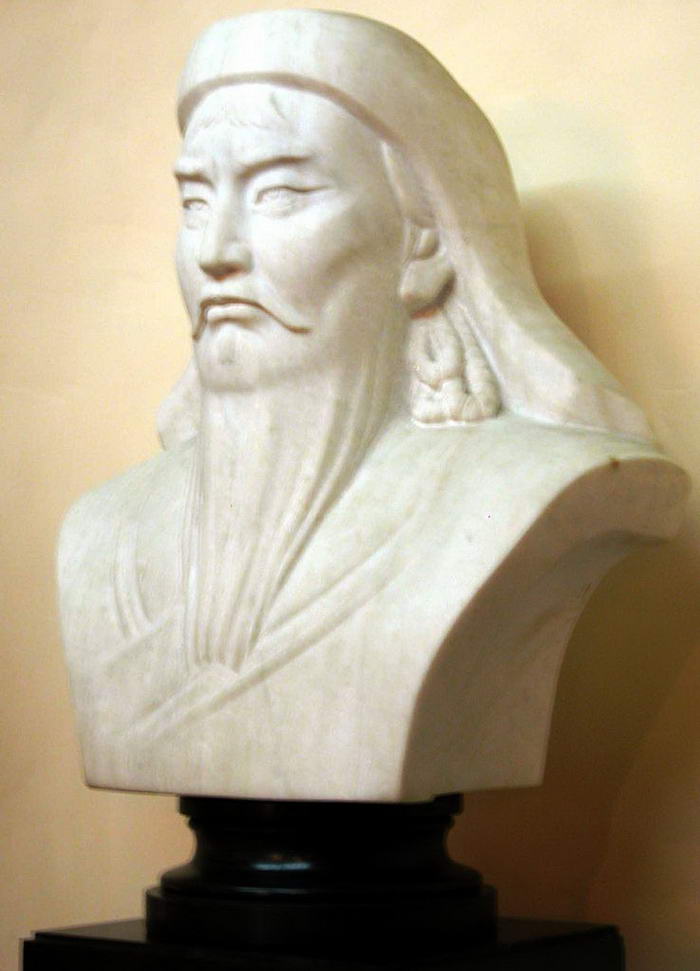 As part of the Islamic empire, the Iraqi city of Baghdad was justly famous for its many great thinkers and literature as well as works of art. In 1258 the Mongols attacked and defeated the opposition forces at the city and completely ransacked it. It is said that the water in the river Tigris ran black with the ink from priceless books thrown into it and many great philosophers were killed. Many believe this marked the end of the Golden Age of Islam and it give an example of how Genghis Khan gave no mercy to the survivors of any place he battled and captured.

04 – He Had Clever Tactics In Battle To Confuse His Enemies

It is a little-known fact that in most battles the Mongols were actually outnumbered. They hid this fact in a variety of clever ways though, dreamt up by their leader. One way was by tying dummies of Mongol soldiers to horse back and setting them off to give the illusion of a bigger army. Another interesting trick was to tie brushes to their horse’s tails so they would drag around and create a massive dust cloud during battle. All this would have been very effective in making the enemy believe they were facing a far bigger force than they were.

03 – He Killed His Half-Brother During the battle of Indus – By Mas’ud b. Osmani Kuhistani [Public domain], via Wikimedia Commons

Yes, that’s right – you weren’t safe from his homicidal rage even if you were closely related to him! Genghis had a half-brother called Bekhter and the tale goes that he refused to share his food one night at dinner. Most normal people would have called him a greedy guts and retired to bed but Genghis decided to take it up a level and murder him. Needless to say, no-one ever took the last piece of chicken again! 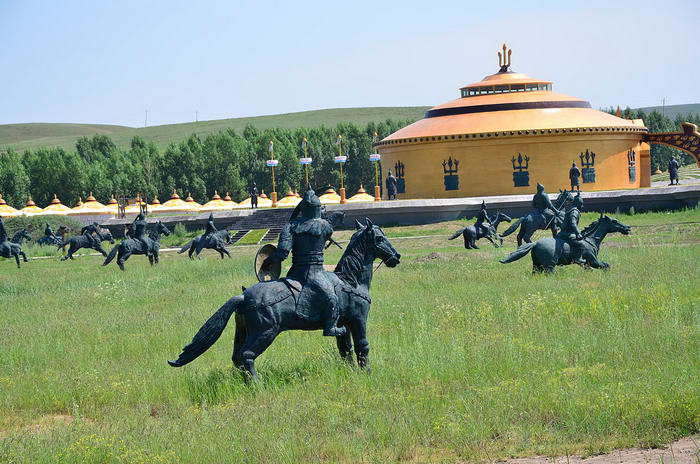 During his rule, he would never have his image sculpted, painted or engraved onto coins. It is not certain why but many believe it was a superstitious thing based on his personal beliefs. It was only after his death that the first images of the Mongol King were released so the world could see exactly what he looked like. 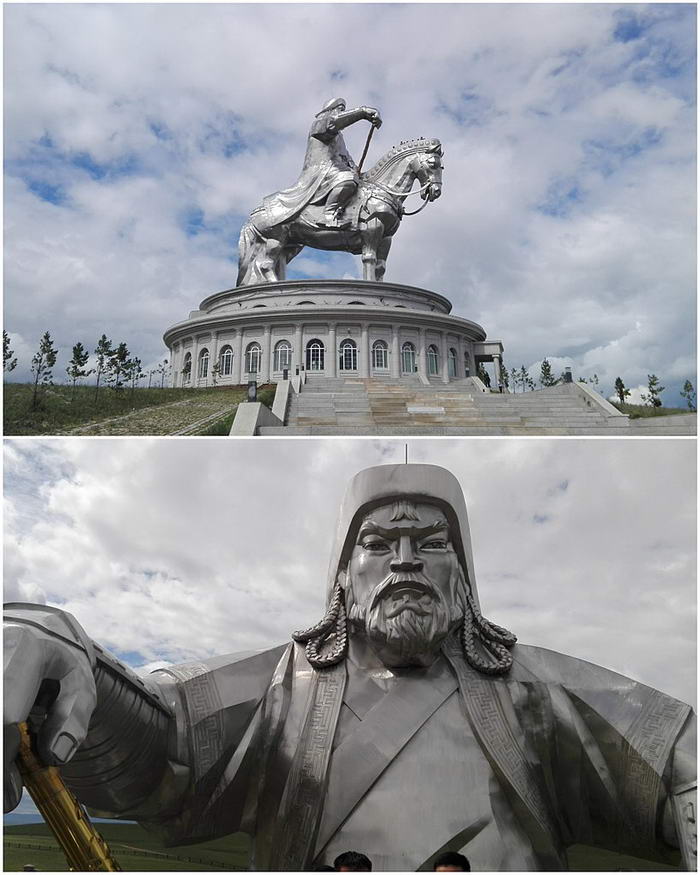 One of the scared rules of the Mongol culture was that no noble blood could be spilled on the ground. Obviously, the only problem this caused for GK was when he wanted to kill a noble who had displeased him. Never a person to shy away from making up creative ways to die, he got round this by making them bend over backwards until their spin snapped, pouring various dangerous liquids or chemicals into their eyes or rolling them up in a rug before his cavalry trampled them.

As we can see, Genghis Khan and his Mongol army were quite a force to be reckoned with! They were extremely successful in their campaigns and built up a huge empire under Khan’s fierce leadership. Although the Second World War was the most deadly ever, the Mongol invasions under Genghis Khan come a close second. This shows why he has gone down in history and is a name that still fascinates to this day.