There is no doubt that, culturally and artistically, the Renaissance period was an important part in the world’s history. It occurred in the 14th century originally and lasted all the way up to the 17th century. The legacy it has left behind is simply amazing with the many paintings completed at the time still being revered today. Famous names such as Da Vinci, Botticelli, Caravaggio and Michelangelo are widely popular in modern culture still which shows the impact their paintings had.
As a time of artistic expression and excellence, it cannot be beaten. Here are ten of the most famous paintings from that era:

10 – The Birth of Venus by Botticelli 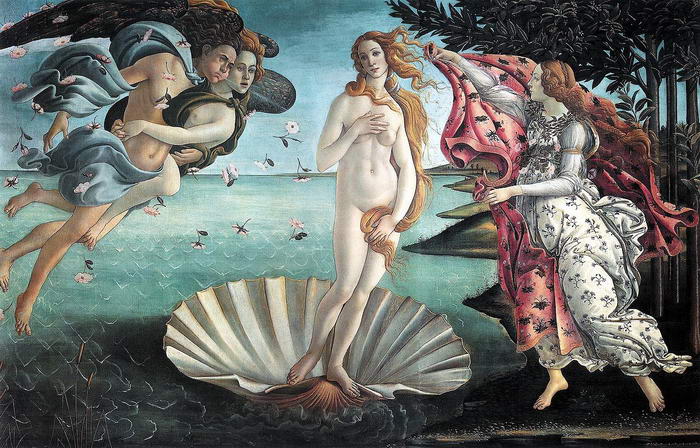 Painted in 1486, this first entry on our list comes from the famous Renaissance painter Sandro Botticelli. The Birth of Venus is a sublime composition and is rightfully one of the most loved Renaissance paintings. It depicts the Goddess Venus coming from the sea and rising out of a seashell in all her glory. As with all art of this period, it is quite racy with only Venus’s hair covering her modesty!
The painting is very romantic in style which was a real hallmark of the art produced in the Renaissance. Botticelli’s use of colour and light is superb, and he really captures the very essence of what he is painting.

09 – Assumption of the Virgin by Titian 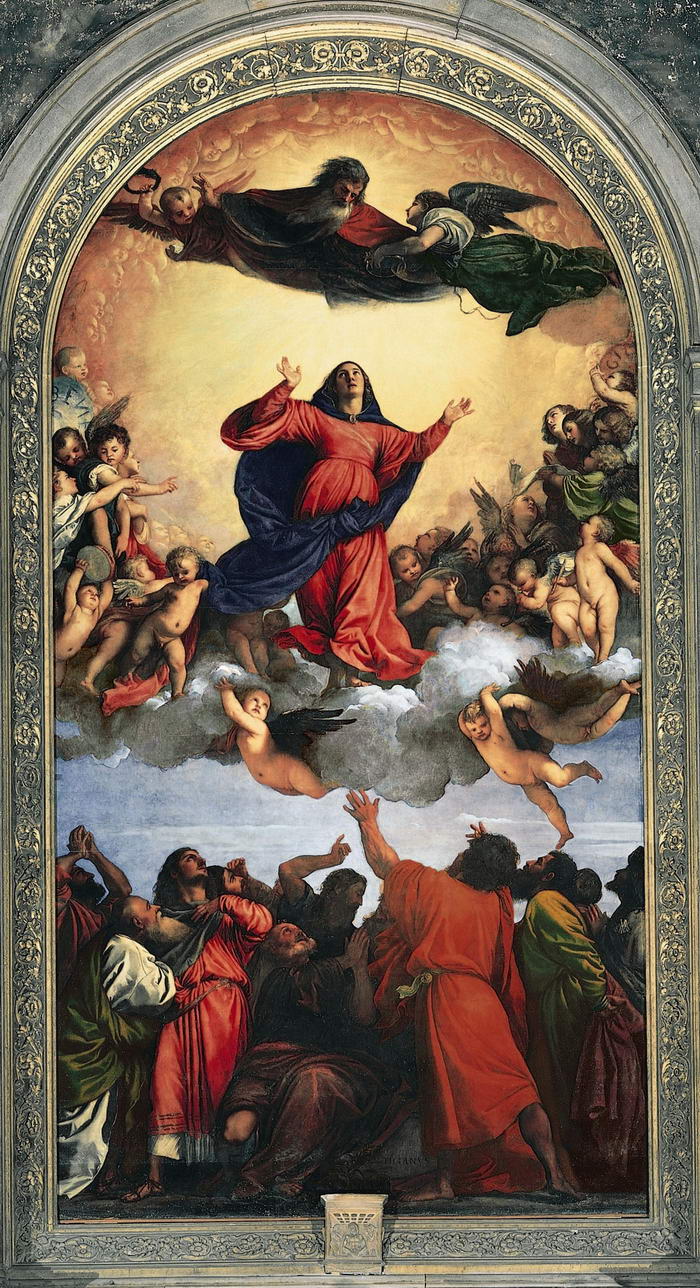 Assumption of the Virgin – Titian [Public domain or Public domain], via Wikimedia Commons

Painted in 1518 by the famous Renaissance artist Titian, this sits over the altar at the Basilica di Santa Maria Gloriosa dei Frari in Venice. This was the painter’s first big commission in the city and really put him on the map as an important person in the Renaissance period. The painting marks an important religious festival that happens on the 14th August for Catholics each year, the Assumption of the Virgin.
The painting shows Mary on a cloud rising up to heaven to be with God while cherubs underneath help her on the way. As you would expect considering the subject, the painting has very powerful religious feel to it which is even more striking when seen in its current resting place. 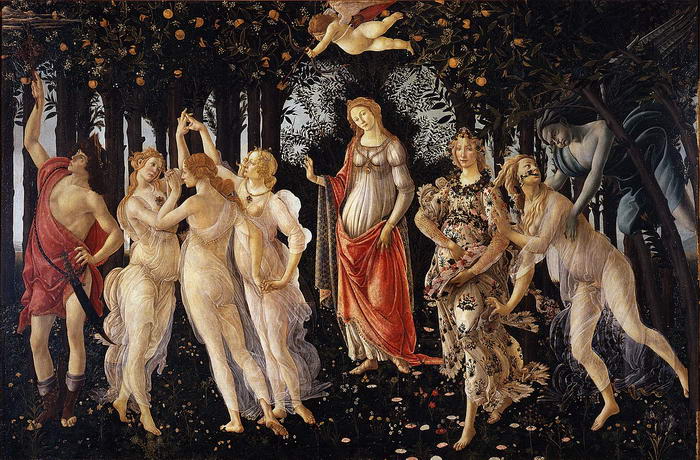 As you would guess from seeing his name again, Sandro Botticelli was a really key figure in Renaissance art. This picture was painted around 1482 and is another example of his romantic and transcendent style of composition. Although there have been many explanations attached to it, many believe it shows the changing of the seasons into Spring. It is particularly striking for the way Botticelli uses a dark wooded background to contrast with the colourful, graceful figures in the foreground. Very classical in tone, it gives a great idea of just what Renaissance art was all about. 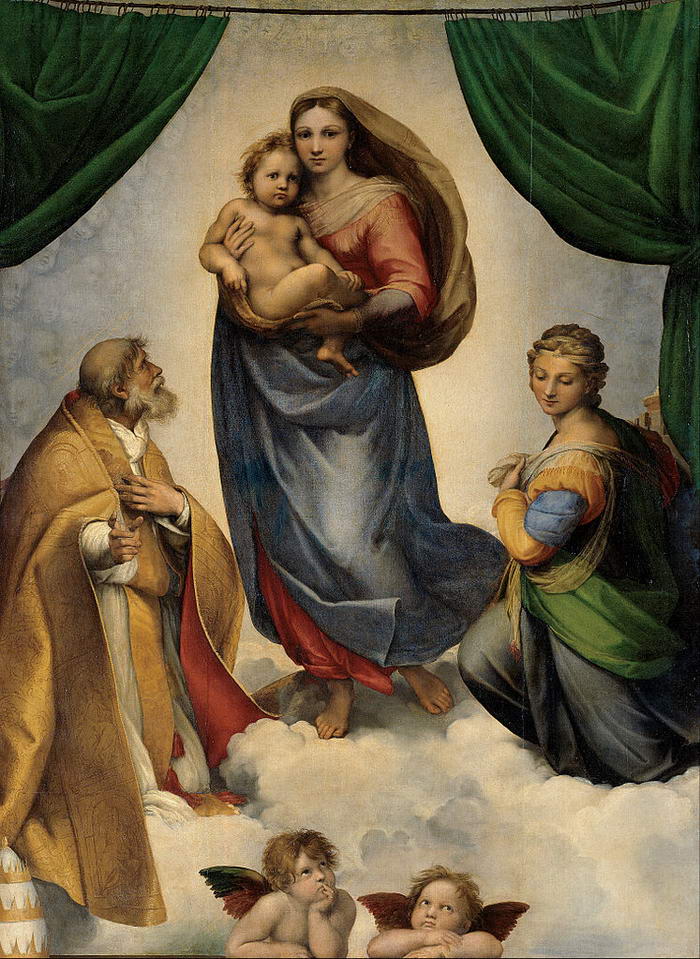 No, not the Ninja Turtle! The real Raphael was one of the best and most well-known artists to have emerged from the Renaissance movement. This painting was one of his real high-points and showcased what made him special. Painted in 1512, it shows the Madonna holding Christ as a child, flanked by Saint Barbara and Saint Sixtus. Most people will also notice the two cherubs at the bottom of the painting who are famous in their own right. Considered one of the finest paintings ever created, the tone and grace it conveys will leave you amazed.

06 – The Last Judgement by Michelangelo 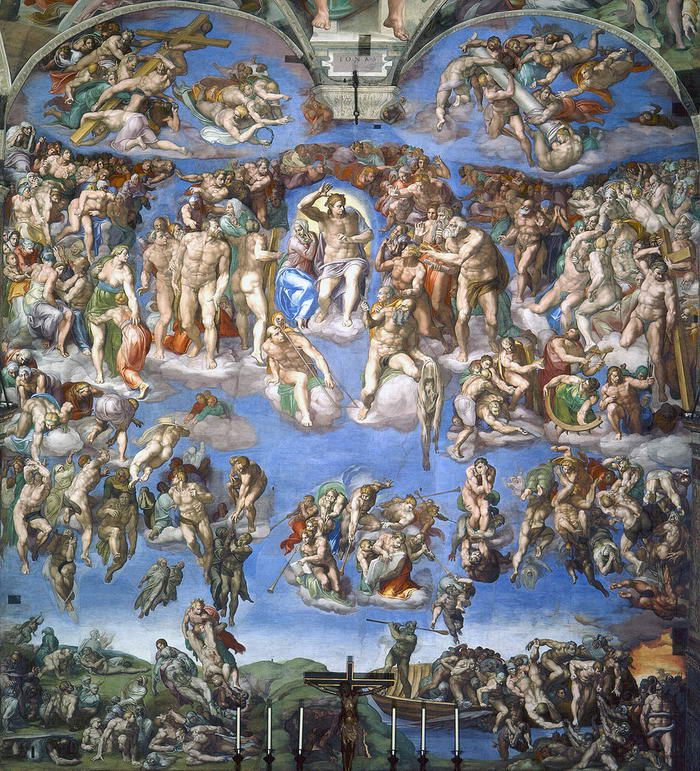 One of the real star names of the Renaissance movement was the man known as Michelangelo. Many will be familiar with the name from his work at the Sistine Chapel in the Vatican which is where this is found. Painted direct onto the chapel wall in 1541, it is a brave and somewhat cautionary tale to all who gaze upon it. The painting shows what will happen at the Second Coming of Christ when God judge all humanity. While the top portion shows the ascent to heaven, the lower portion reminds those who do evil that hell awaits. Combining glorious colour with precise brushwork and a startling message, this is one of the best loved paintings in the world.

05 – The Conversion of Saint Paul by Caravaggio 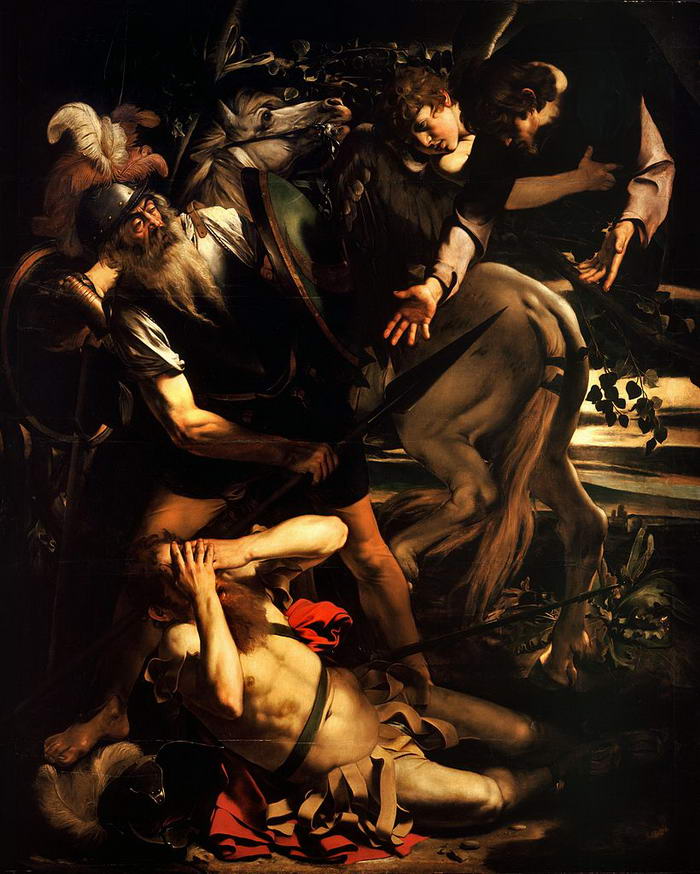 Easily one of the most fascinating, talented and hell-raising figures of the late Renaissance period was this guy. Caravaggio was almost as talented at partying or getting into trouble as he was with a brush in hand! Famous for his liking of a drink, a fight and women, he was the real bad boy of Renaissance art.
This controversy also followed him in his work as the style he painted in was different to the romantic Renaissance standard. Caravaggio went for a more realistic, street level approach as this painting shows. The use of light is stunning as is the way the painting conveys the message of how Saul turned into Saint Paul on the Road to Damascus.

04 – The School of Athens by Raphael 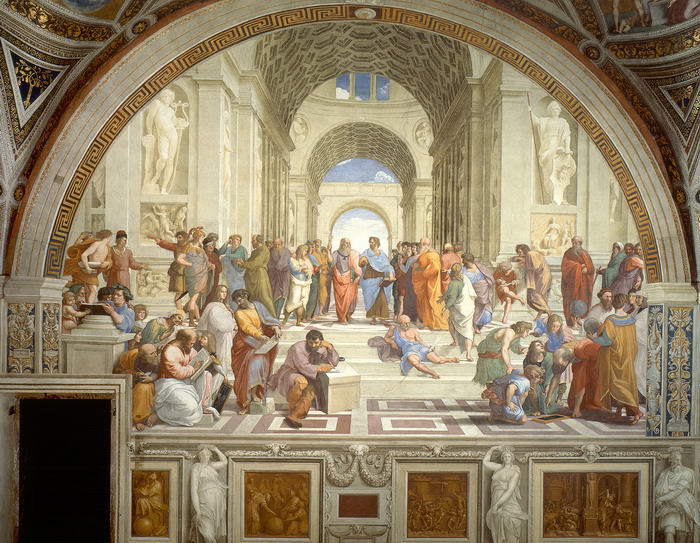 This is the second Raphael painting in our list, but it certainly deserves its place. Completed in 1511, it is one of the main frescoes found on the walls of the Apostolic Palace in the Vatican. The painting is meant to represent the golden age of Greek philosophy when the discipline was at its peak. All the main famous Philosophical figures are found within it, with Plato and Aristotle at the centre. Perfectly capturing the classical spirit that the Renaissance period is famous for, this is a simply stunning work of art.

03 – The Creation of Adam by Michelangelo

Now we move onto the most well-known pieces of art from the period that most will know. These have been shown on tv and in the media many times, so you will no doubt be aware of them already. The first is this fabulous piece of work from our man Michelangelo. Created in 1512 and found on the ceiling of the Sistine Chapel, it shows how God created Adam who was the very first man. The most celebrated aspect of this painting is the way that God and Adam’s hands are almost touching which is a powerful image on human divinity to many. One of the real flagships of Renaissance art, the quality of the brushwork and the realism of the features in the painting make it a marvellous example to see. 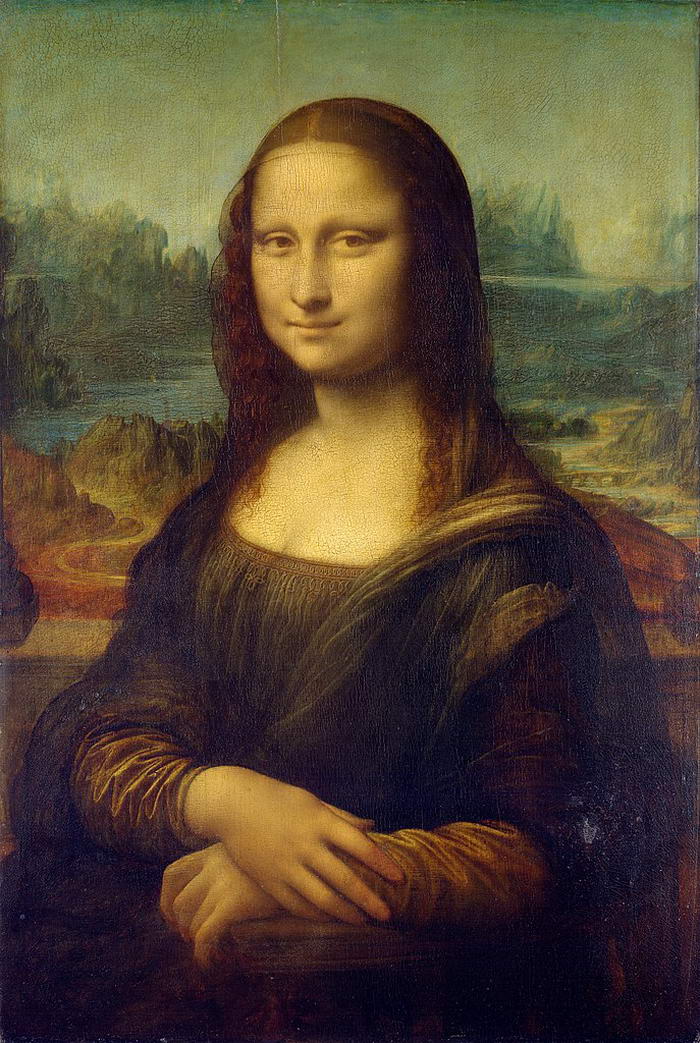 Before the ‘Da Vinci Code’ made his name famous in recent times, the real Da Vinci was one of the maverick geniuses of the Renaissance period. Not only a painter, he was also an inventor and architect too. Surely, one of his most famous paintings is this one and most will have seen it on tv or in a magazine at some point. Created in 1517, this is one of the most reproduced and talked about pieces of art in history.
The main feature that Da Vinci crafted into it so well was the enigmatic smile that people still discuss to this day. What is the woman in the painting thinking about and why is she smiling a little? The other very unique feature of this art is the way the eyes have been painted to seemingly follow you around the room. 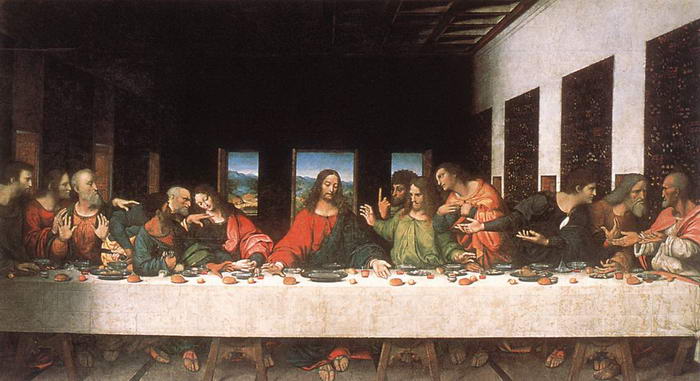 Created in 1498, this is arguably the best piece of art ever made. It is certainly the one painting from the Renaissance period that stands out still. The scene it shows is that of the Last Supper where Jesus took a final meal with his disciples. The painting makes great use of colour along with a very light, airy quality to sum up the religious serenity of the subject. It is a painting that bristles with life too as we see arguments and discussions taking place around the table as Jesus speaks.
Of course, it is also a subject of much discussion for the hidden meanings many believe Da Vinci painted into it! There has been much conjecture over the figure to Jesus’s right in the painting – many now believe it to be a female figure due to its effeminate looks, most probably Mary Magdalene. The V shape that her leaning away from Jesus creates is also quite unusual in the context of the painting and makes you wonder why Da Vinci painted that there. Whatever the real meaning of the painting, this is one amazing work of art!

The fact is that you don’t have to be an art lover or intellectual to appreciate these paintings. Just simply taking a few minutes to look at them and appreciate their sheer beauty is enough. The Renaissance period in general was a high point for the arts with sculpture and architecture being represented also. It has not really been repeated as a whole, sustained movement since which shows just how special it was.