We all love to relax in our spare time and many of us enjoy taking part in adrenaline fuelled sports for our kicks. Our ancient ancestors were no different and liked nothing more than risking life and limb for their own personal enjoyment. Some of the activities they got up to were absolutely insane by modern standards though – nothing soft like bungee jumping for a Viking or Roman.
Take a look at our list below for the most ‘Are you sure that’s a good idea?’ sports from history: 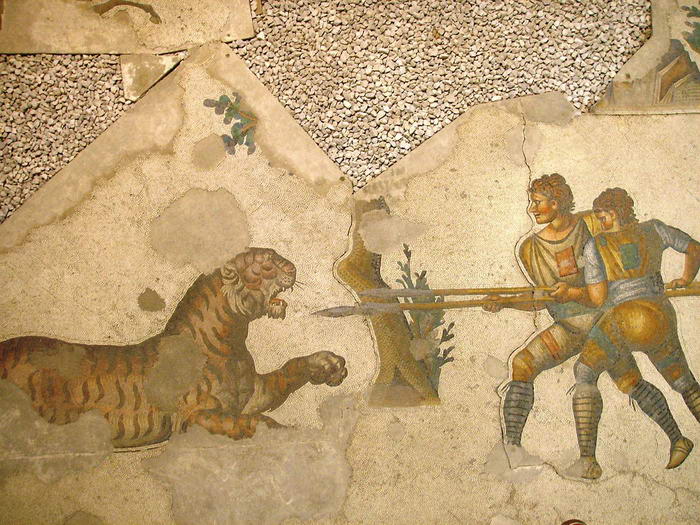 Venatio – By Byzantine mosaic artist from the 5th century (Own work) [Public domain], via Wikimedia Commons

The first total bonkers sport on our list is the Roman one of Venatio. Translated into English, it means ‘The Hunt’ and gives an idea as to its purpose. One of the forms of Gladiatorial combat, slaves would be forced into the arena and made to take on the scary ‘Beast of Carthage’.
This beast was in fact 20 angry Elephants who would be charging at you full speed, ready to stomp you underfoot. With a measly 2% chance of survival, this was not only a crazy sport but deadly too. The Romans however loved watching it and played it so much they almost ran out of Elephants to do it with! 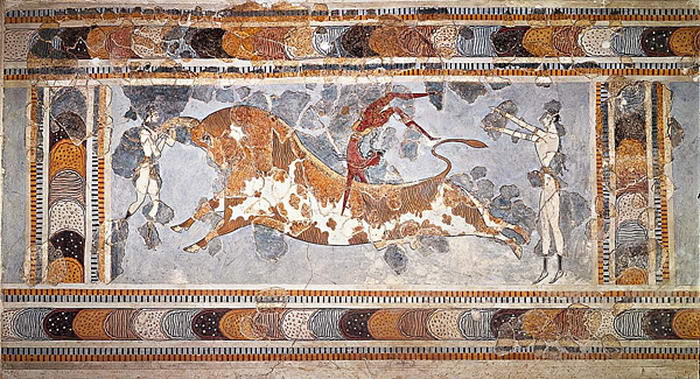 The sunny island of Crete in Greece is a beautiful place but one that is was also home to a dangerous coming of age sport. Cretan Bull Leaping is self-explanatory in that it required young men to face a speeding bull head on and jump over it. It was thought that the ancient Cretans used this as a sign that a boy was now ready to move into manhood.
The downside of this was that if you slightly mistimed your jump or got it wrong then you would have bull horns in places they shouldn’t be. Lots of young men were seriously injured or killed doing this so not surprisingly it has long since died out.

The Fishermans Joust – By Daderot [Public domain], via Wikimedia Commons

I love this particular one because the name sounds so romantic and peaceful. However, since it was a sport devised by the ancient Egyptians that is simply not true. On a par with the Romans for coming up with ever new ways to kill people for fun, this was a very popular sport in ancient Egypt.
The principle was simple – two teams rowed out onto the crocodile infested Nile in their boats with crowds lining the banks to watch. Once close enough, the basic aim was to beat the living daylights out of the other team with your paddles until they all died and you won. In terms of brutality, this is up there with the best. If the cracked skull from the paddles didn’t get you, then falling into the waters of the Nile to be eaten by the crocodiles or hippos would. 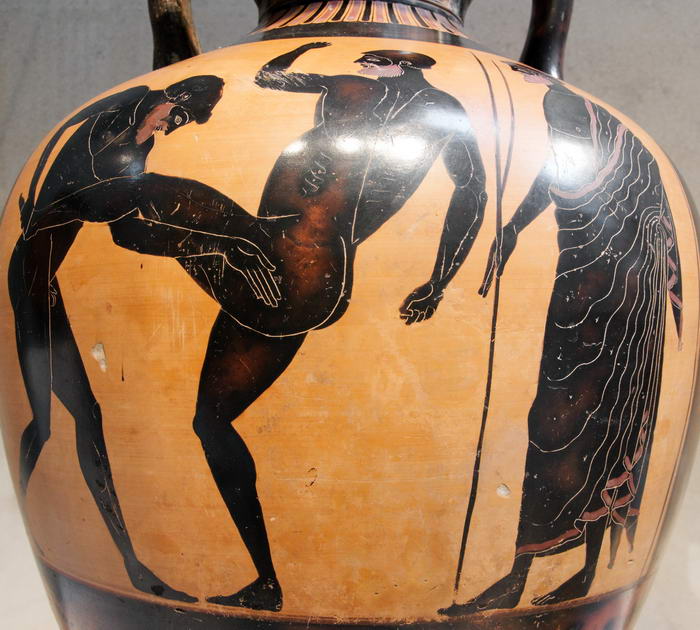 Invented by the ancient Greeks, Pankration was essentially the first version of modern Mixed Martial Arts. However, been from the ancient past, there were even less rules than in MMA! There were no rounds or rests and anything went. It would be a fight to the near-death with no referee to intervene unless one fighter submitted. You actually lost if you killed your opponent though as the Greeks believed that dying in combat without submitting meant your opponent had bigger balls than you. 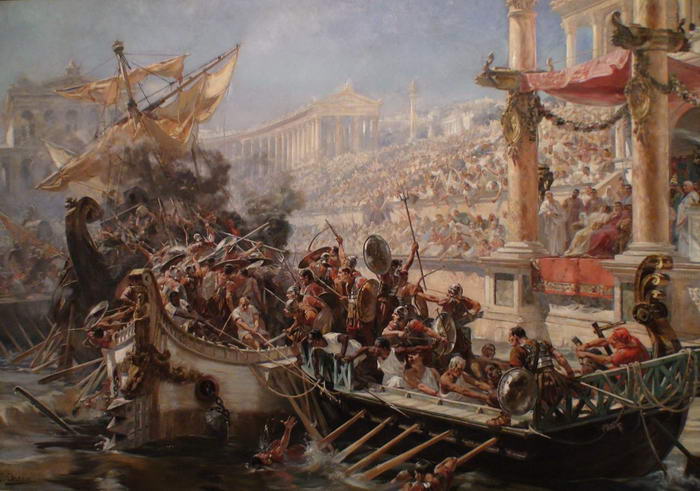 Naumachia – By Poniol60 (Own work) [Public domain or Public domain], via Wikimedia Commons

Who remembers the board game Battleships? You try to destroy your opponent’s fleet of ships and walk out the victor, using cunning and strategy. The Romans loved this sort of thing to but, with being the Romans, decided to take it up a notch or two. They played the same game but with real ships in a huge stadium filled with water and called it Naumachia.
Usually famous battles from the past were recreated for the crowd’s entertainment and each side would blast away at each other until one side had lost all its ships and crew. It was a bit like watching Pearl Harbour but with no made up CGI! 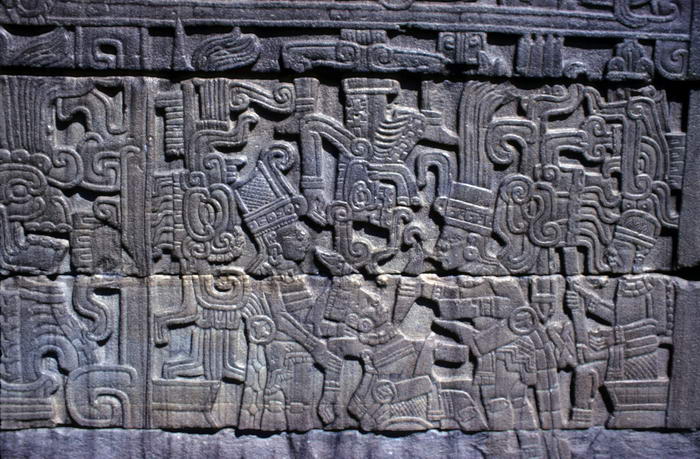 Pitz was a game that was very popular in ancient Mexican and the surrounding regions. It can be most closely compared to modern day volleyball with one important difference – it was completely mental and a total bloodbath.
The ball they played with was nine pounds in weight and made from solid rubber – you can imagine what damage that did to players hands and wrists! The basic rules were that players had to bounce the heavy rubber ball off their arms and wrists, being careful not to let it touch the floor. If they did that and bounced it off the opponents wall, they scored a point. Points could be lost if the ball was allowed to hit the ground more than twice. As an added twist, the game could be instantly won by either team getting the ball through the sideways hoop mounted on the other teams wall.
So far so good right? The ball’s a bit heavy and it could get rough but doesn’t sound too bad. The nasty surprise to this game was at the end – while the winners got to celebrate into the night, the losers were lead into a back room and had their heads chopped off!

Knattleikr – By David Pugh at en.wikipedia (Transferred from en.wikipedia to Commons.) [Public domain], via Wikimedia Commons

Knattleikr is another Viking addition to our list and as you would expect it’s pretty brutal. Although little is officially documented about the game, details of it have been passed down through old Viking tales.
It would seem that two teams consisting of ten big and angry Vikings would meet on a frozen field or pond. They would be carrying small but hard wooden bats that would be wielded around to apparently catch the ball and keep it from the other team. However, as with most Viking stuff, the real point seems to be that you use the bat to hit anyone within arm’s length as hard as you can for a laugh. The ball used was also extremely heavy so if you got bored of beating an opponent with your bat, you could always just chuck the ball at his head and knock him out. Matches would last days usually or until one team was completely wiped out. 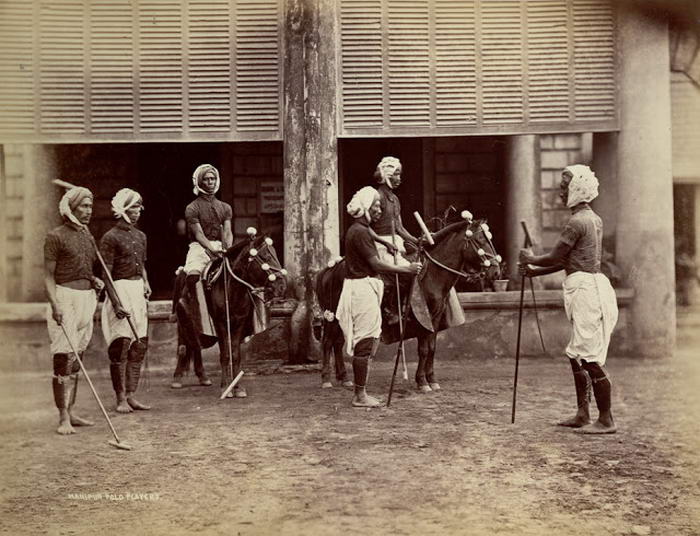 In times gone by, cavalry troops played a decisive role in battles. As such, it was very important to have highly skilled cavalry soldiers who could move at speed but also manoeuvre their horse effectively.
Out of cavalry practice for this type of thing, the game of Polo was born. Although still played now, the original ancient Polo was a somewhat bloodier affair. Developed in the Persian Empire, Ancient Polo employed little safety equipment and an unquenchable thirst to maim your opponent by cracking him with your mallet or knocking him off his horse. The mallets used were also much longer and frequently got stuck in the horse’s legs for further carnage. 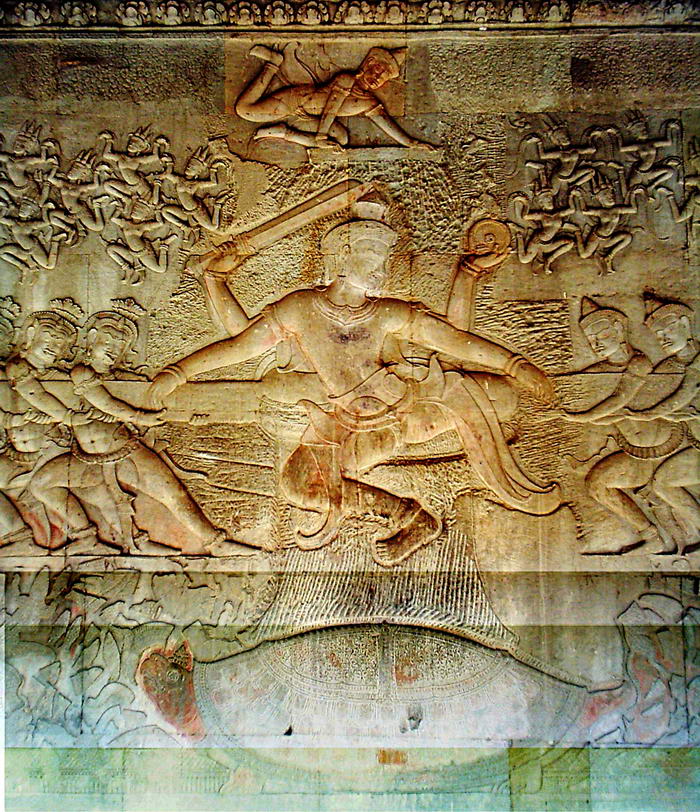 Viking Skin Pulling – By Image by User:Markalexander100. (Own work) [GFDL or CC-BY-SA-3.0], via Wikimedia Commons

There’s crazy and there’s Viking crazy. These guys were absolute animals as has been well documented and this sport came just behind pillaging as their favourite pastime. In essence, it’s a turbo charged tug-of-war with a few historical changes.
Firstly, the rough and tough Vikings didn’t use a nice rope for it. They went all in and played it with tied together animal hides. Added to this was where they played it – forget about a school playing field or summer camp. They thought it a good idea to play it over a massive burning pit of fire, just to make things more interesting.
The rules of the game were the same as our tug-of-war in terms of how they decided who had won. The actual outcome was a little different though – as it was over the aforementioned fire pit, the losers were dragged into this for a gruesome end. 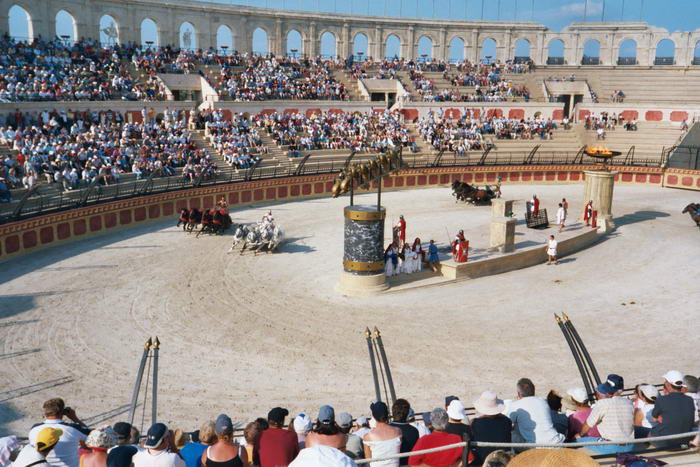 If one sport has to be considered the most off the scale crazy then this is it. For a civilised culture, Rome was also absolutely mental when it came to making up things to do when not at work or in the bathhouse.
The lure of Chariot Racing was easy to see – in a similar way to modern day footballers, charioteers were very well paid and had celebrity status. Unlike modern day footballers, they had every chance of dying each time they stepped out to compete. The average age of a charioteer was just 22 when the died!
As a sport, it was completely mad and unsafe. The basic aim was to ride your horse drawn chariot to victory whilst racing against other charioteers trying to do the same. Unfortunately, there were no real rules and anything went. You could ram other chariots at will, use weapons and attack the opponent’s horses to make them crash. Due to this, a lot of death and violence was involved which makes it the craziest sport ever.

In the modern-age we like to think we own the rights to coming up with new and interesting ways to test ourselves. However, as this list shows, our ancestors were just as good at developing ingenious ways to see how far you can push the human body. Thankfully, they have long since died out – after all a quick game of racquetball is preferable to Viking Skin Pulling or Chariot Racing!